NGOs Have Their Say: The 2013 China Foundation Rankings

As domestic foundations have grown rapidly in number the relationship between foundations and China’s NGOs has become a hotly-discussed topic. It is usually examined from the standpoint of the foundation, but in November 2013 the findings of a new survey were announced that assessed the relationship from the perspective of the NGO.

The China Foundation Rankings (中国基金会评价榜) was a project launched in the summer of 2013 by five Chinese grassroots NGOs. It surveyed 103 grassroots Chinese NGOs about their experience of dealing with their funders and, through doing so, aimed to promote a more balanced and sustainable relationship between foundations (both international and Chinese) and grassroots NGOs. 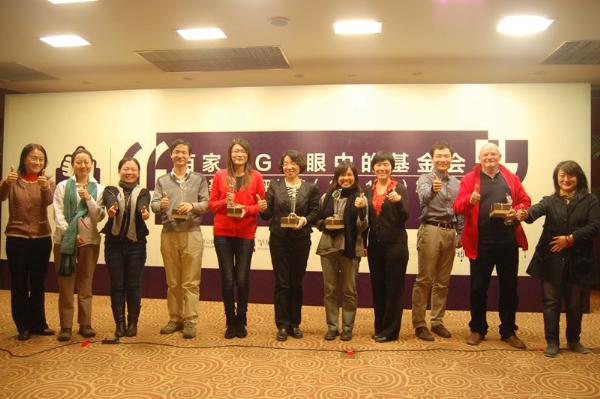 Representatives from NGOs and foundations, including CDB’s Chen Yimei (far left), give the rankings a big thumbs up

The November 11th awards ceremony that marked the announcement of the survey rankings was held at the Schonnbrun hotel in Beijing and was well attended by both foundations and NGOs, a mark of both the demand for, and the significance of, the findings. For the representatives of the foundations it was a rather nerve-wracking experience as none had prior knowledge of the results of the survey. After the results were announced and the prizes awarded, some foundations were happier than others, but even those who received poor scores dealt with their feedback in a constructive way.

The highest ranked Chinese foundations were:

The highest ranked international foundations were:

The exercise also held special significance for China Development Brief (CDB) as the Foundation Rankings relied on CDB’s 2013 Chinese NGO Directory (中国公益组织名录) to find and contact the NGOs. CDB’s Executive Director, Chen Yimei, attended the awards event and was invited to award one of the prizes to the Ford Foundation. Overall, Yimei was impressed with the project “it’s one of the first activities that I know of that is trying to address the NGO-foundation relationship” Yimei said. “Although the rating was not too scientific it still represents a strong advocacy effort. It helps to make Foundations realize that they should treat NGOs with more equality in their partnerships, rather than just assume a top-down relationship”. 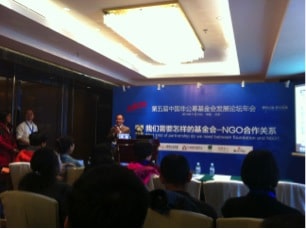 A few days after the awards ceremony, Director of CDB (English) Shawn Shieh and CDB’s Associate Editor Guo Ting attended a follow-up event about the Foundation Rankings: a workshop held as part of the Fifth China Private Foundation Forum, an annual event organized by a group of private foundations to promote a stronger, more effective foundations sector. The workshop was also well attended, with a full room of participants from NGOs, foundations, academics and media.

Representatives from two of the founder organizations of the Foundation Rankings presided, and some of the foundations that had been rated were also involved, including Liu Zhouhong from the Narada Foundation, and Dou Ruigang from the Tencent Foundation. The workshop had a roundtable component comprising foundations and some of the NGOs that had been involved in the evaluation process, including Song Qinghua from the Shining Stone organization and Feng Yongfeng from the Nature University. During the roundtable discussion they took questions from the audience, and talked about the project motivations and the criteria for the evaluations. This element, as Shawn says, enabled the workshop to present a nicely balanced view from both the foundation and NGO perspectives.

The timing of the publication of the Foundation Rankings was significant, as Yimei says: “it’s a critical moment, a time when foundations are thinking about their operating model and the philanthropy sector is contemplating whether we should have more grant making foundations”. While the scope of the Foundation Rankings was limited to the NGO-foundation partnership – most of the questions were about equality in the grant-making process – it remains a great exercise in helping Chinese foundations to be more professional and more forward-thinking, promoting a more sustainable way for foundations to engage with NGOs. And for CDB, it was also an encouraging event, As Yimei says “We are very proud that the ratings used our data from our directory. It doesn’t mean that we are perfect, but that we provide the most readily available, accessible, and reliable data. So for CDB we really see the value of developing NGO data and making it available for professional use.” 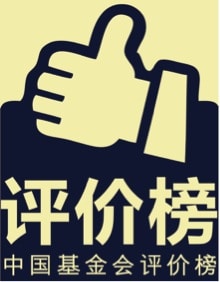 The evaluation rankings and the accompanying report can be downloaded from here (in Chinese). CDB’s Shawn Shieh and Tom Bannister have translated the opening paragraphs of it below:

“The China Foundation Rankings (referred to below as the Foundation Rankings) is an advocacy exercise launched in 2013 by five grassroots NGOs: Love Together Public Welfare Innovation Organization (One Kilogram More), Chinese Organization for Rare Disorders (CORD), Leling, Social Resources Institute (SRI), and the New Citizen Program. Its purpose is to evaluate Chinese domestic foundations from the perspective of grassroots NGOs, and to independently release a ranking. The aim is to promote the positive growth of the Chinese charity sector.

In August of 2013, we started the first investigation of the Foundation Rankings – “Foundations in the Eyes of 100 NGOs”. We used China Development Brief’s China’s NGO Directory: Chinese Civil Society in the Making to select 150 Chinese NGOs and sent email invitations asking them to evaluate their funders over the last three years. Their evaluation was based on 5 questions/criteria: (1) Was their funding partnership an equal and respectful one? (2) Did the funders provide “administrative” or “core” funding? (3) Did the funders provide other resource; (4) Did the funder show flexibility in allowing for changing circumstances? (5) Did the funder give the project an appropriate degree of attention, not intervening too much but also not being involved? During the investigation period, 148 foundations were evaluated, of which 50 were Chinese foundations and 98 were international foundations. The top 5 foundations in the Foundation Rankings were honored with an award for 2013 from the organizers.

Foundations and NGOs are both indispensable forces in the development of the public welfare. Collaboration between the two sides is critical to the healthy development of the public welfare sector. Because of the resources that foundations possess and the superior status they hold, and the relatively weak survival ability of NGOs, the power relationship between the two has been unequal. Moreover in order for social change to take place, the two sides need to work together. Going through a third-party evaluation as a way to explore communication and cooperation seemed to be especially important. In the past, it was foundations that evaluated NGOs, but NGOs have had few opportunities to evaluate foundations. We hope this evaluation event will serve to promote a dialogue between foundations and NGOs, and promote mutual understanding and collaboration between them. We hope the Foundation Rankings will mark the beginning of an effort to explore collaboration between foundations and NGOs!”

Assistant Director of CDB (English) Tom Bannister reports on the recent publication of a rankings index in which Chinese NGOs got the chance to rate the foundations that fund them.