From NGO to Social Enterprise: an Interview with Gaia School

This is the second part of the “From NGO to Social Enterprise” series. In order to read the interview with social enterprise incubators NPI and 724 Hub, please click here.

Despite the growing trend among Chinese entrepreneurs towards founding social enterprises, for many Chinese NGOs starting a mission-driven business arm is still an unknown area awaiting to be explored.

Gaia School, a social enterprise focusing on environmental education, was started in 2014 with the aim of nurturing green citizens with a social responsibility. In order to increase public knowledge of the environment and strengthen the bond with nature, the school offers environment-focused day trips, winter camps, summer camps, trainings and tons of other courses and activities for close to ten thousand school kids and parents all year round.

Despite calling itself a social enterprise, the school is actually a partnership project, co-funded and co-facilitated by a Beijing-based NGO called Friends of Nature and a business entity called the Beijing Gaia Consultancy.

Started in 1993, Friends of Nature is one of the oldest NGOs in China. Focusing on environmental conservation, over the years Friends of Nature has developed not just one but several business arms, including Gaia School, GAIASCAPE and Novaloop, in order to achieve self-sufficiency.

Due to the restrictions on NGOs, Gaia School is neither a registered business entity nor a division of Friends of Nature. Zhang Hehe, the principal of Gaia School, explains the uniqueness of the project structure.

As she recalls, back in 2014, a group of Friends of Nature volunteers and members of staff decided to set up the Beijing Gaia Consultancy and agreed to prohibit profit-sharing among shareholders.

As a senior member of staff who has been working for Friends of Nature since 2003, Zhang is also one of the 26 founding members of the company. She says that, after the company was registered, Gaia School was initiated as a partnership project with Friends of Nature.

A management team of five, comprising a board of directors with three members from Beijing Gaia Consultancy as well as the President and Vice-president of Friends of Nature, was then formed to oversee the operations of Gaia School.

To make the project self-sustaining, all profits will be reinvested back into the school for the purpose of developing new courses. Only when the profit exceeds a certain amount, an agreed percentage will be donated back to Friends of Nature. 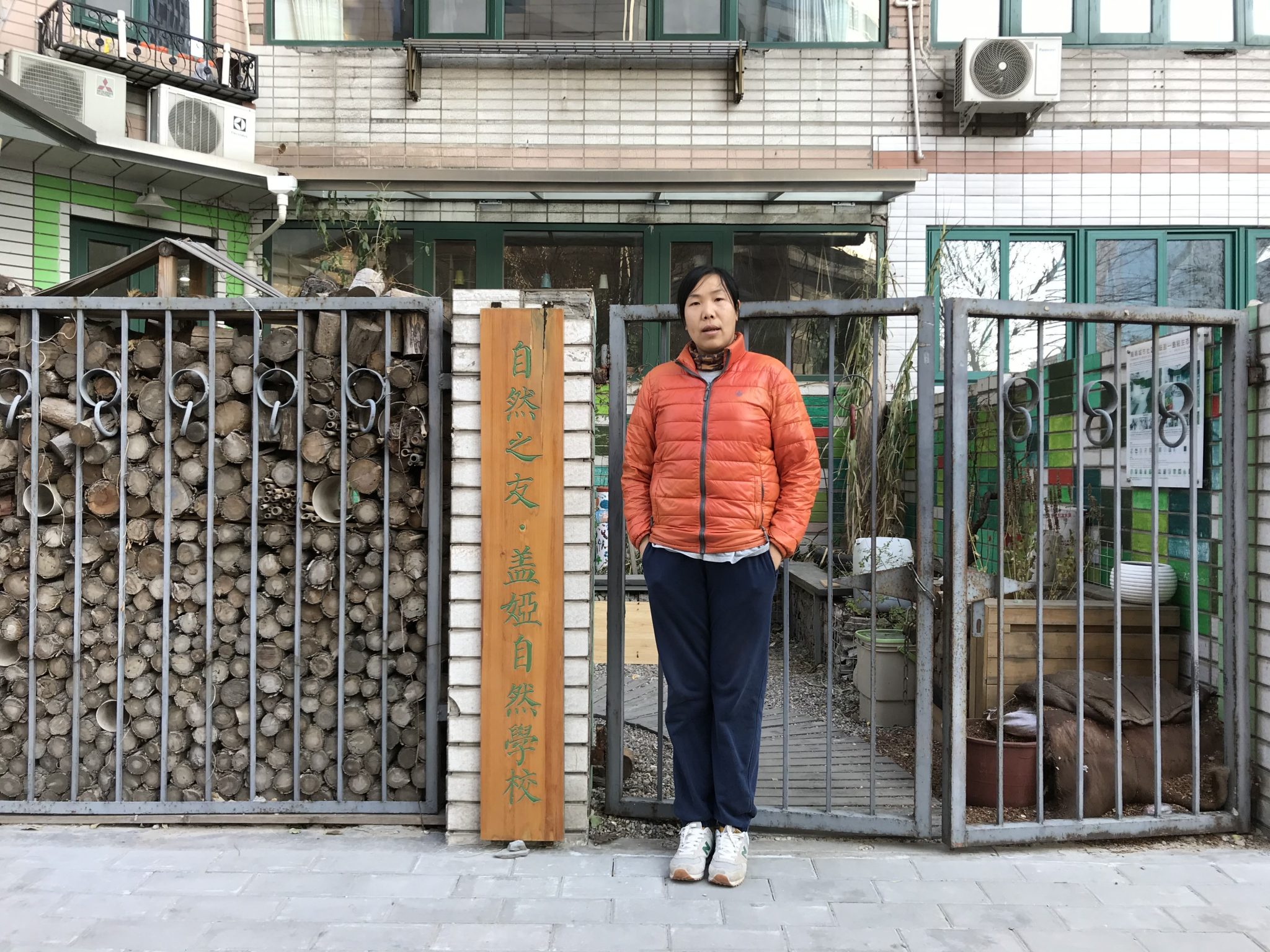 Zhang Hehe is a senior member of staff at Friends of Nature and also the principal of the Gaia School (Photo: CDB)

Same as many other NGOs, Friends of Nature started Gaia School to seek financial independence. According to Zhang, Friends of Nature used to provide free environmental lessons for the Hope Primary Schools and migrant children, and most of their funds came from international funders.

“International funders are concerned about how the fund will be utilized and who will benefit, thus in most cases, our target groups were limited to underprivileged people, for example people from rural areas and low-income families.”

However, as she explains, the growing purchasing power of China’s urbanites has led to a drastic lifestyle change, raising individual carbon emissions as well as the awareness of their impact on the environment.

“But when we wanted to organize events in major cities, funders might question why we would sponsor free courses for high-income people. To me, if we keep spending resources on underprivileged groups or low-income families who actually contribute less to environmental problems, isn’t this a waste of resources?”

Not only were their plans restricted by funders’ requirements, but the situation got worse when many international funders started to pull out from China. Some believe that China now has the ability to solve its own problems, while many are pulling out due to the tightened environment for overseas NGOs. The restrictions on international funds and the fundraising bottleneck prompted Friends of Nature to finally start Gaia School in 2014.

Achieving self-sufficiency while holding the bottom-line

China’s market for private education is booming. It is set to reach USD330 billion by 2020. Coming from an NGO background, throwing themselves into this competitive moneymaking game was not easy, especially when none of them had experience of running a company. But still, Gaia School stood out from the competition and became the most prominent environmental education provider in just six years.

“Although we have managed the school with a for-profit model, Gaia School itself is not for profit. The purpose of setting up the school was to make sure we could continue to run meaningful environmental projects.” Zhang says.

She stresses that what the school takes into consideration is not just making a profit. “There are many industries that ‘play games’ and break their bottom-line again and again, therefore, we have come to an agreement that we will never play games or break our bottom-line.”

To explain the meaning of “playing games” and “breaking the bottom-line”, Zhang shares a story that was told by a volunteer. “The volunteer used to work for a travel agency. During an educational trip organized for kids, a member of staff gave each of them a yoghurt in front of their parents,” Zhang laughs, “she believed that by doing so she would give the parents the impression that their kids are in good hands.”

“As an educator, we shouldn’t be playing games like this because all of our messages and values will collapse in front of such actions.” She adds: “an educator is not a service provider; what we do is nurture better people, and people are the basic unit of communities and society. If educators always broke the bottom-line and played games, our society would become so horrible.”

To make sure the school sticks to its mission while sustaining itself, the management team always obliges two principles when making decisions – the profit and the impact.

“When we receive partnership inquiries, we not only ask if the project will generate a profit for the school, we also evaluate the impact that we will bring to the world. We decline projects that are not aligned with our rules, for example property developers who intends to bring eco-tourism to a rural village. Some have invited us to build a Gaia School there as part of their marketing strategy.”

While many summer camp providers are determined to meet their clients’ expectations, including good meals and comfy hotel rooms, Gaia School does it in the opposite way.

“We conduct individual phone interviews to understand the candidates’ motivations and goals. Also we make sure that they understand that the accommodation and food we provide is very basic. Moreover, kids are not allowed to play on their phones or eat snacks in the camp.”

Zhang laughs, adding that they are selective when choosing participants as their aim is to nurture green citizens with a greater sense of responsibility, not to make the “clients” happy.

“We control the size of the camp to ensure that we stick to our values. So even though the market demand is great, we won’t take the chance to maximize profits.” From making phone calls to filtering participants, Zhang says, these actions might seem small but they are indeed the core values of education.

The challenge and vision

Although Gaia has been operating for six years, Zhang admits that they are not yet professional about running a company. Therefore, despite its popularity, the courses still remain relatively small scale and the growth rate is not comparable with large education providers which have developed a multipliable business model.

Regarding this, Zhang has a different point of view. “We are not looking for a rapid expansion or to compete with them. To me, the market is just like the ecosystem, which is a diverse system made up of different creatures. It won’t work if all the stakeholders in this market are expanding slow or fast. The key is to have someone to hold the bottom-line.”

She emphasizes that there’s nothing wrong with a commercial business model, but from her perspective, holding the bottom-line as an educator is the mission of Gaia School. To make sure the values of the school are well preserved, the team only accepts branch applications from passionate volunteers who have showed enough dedication to environmental education over the years.

Currently, two branches have been set up in Yunnan and Anhui, and there is no franchise fee and subsidiary relationship between the branches and Gaia School. All they request is for the applicant to have the same kind of vision for the challenging future.

“If we had more people like us everywhere in China, working for organizations like Friends of Nature and doing things like what Gaia School is doing now, the society would not be pursuing trendy business models.”

She further explains, “the climate crisis will become more and more serious. Many social issues will be exposed due to the extreme climate challenge. Is our society resilient enough for the future?”

Zhang warns that many business models will collapse under extreme climate conditions, “and by then, how could we prevent humanity from collapsing too? This is what we are working on now. So no matter how the market promotes business models that could generate a profit quickly, I am sorry, but this is just not for us.”

Zhang Hehe talks to CDB about how Gaia School, a social enterprise started by Beijing-based NGO Friends of Nature, successfully achieved self-sufficiency without straying from its mission.