Today is China’s Children’s Day – let’s take a look at the situation of Chinese children!

This is CDB’s abridged translation of a WeChat post by UNICEF China, published on the first of June, China’s official Children’s Day. Please find the original here. The graphs are all taken from UNICEF’s report.

This Children’s Day, let’s get a deeper understanding of China’s children.

Do you know the answers to the following questions:

Children are the future, and children’s current state of development will be the foundation of the future population’s social development. Understanding the statistics and the true situation of China’s child population allows us to have more hope and consideration for the future. It also gives us motivation to come together and work harder for a brighter future.

Based on an analysis of the 2015 Chinese national survey of a sample of 1% of the population and on the sections of past population censuses dealing with China’ children, the National Bureau of Statistics, UNICEF and the United National Population Fund jointly published the “2015 Status of Chinese Children – Facts and Figures”. What does this report show? What characteristics of the child population does it uncover? Let’s look at the following infographics. 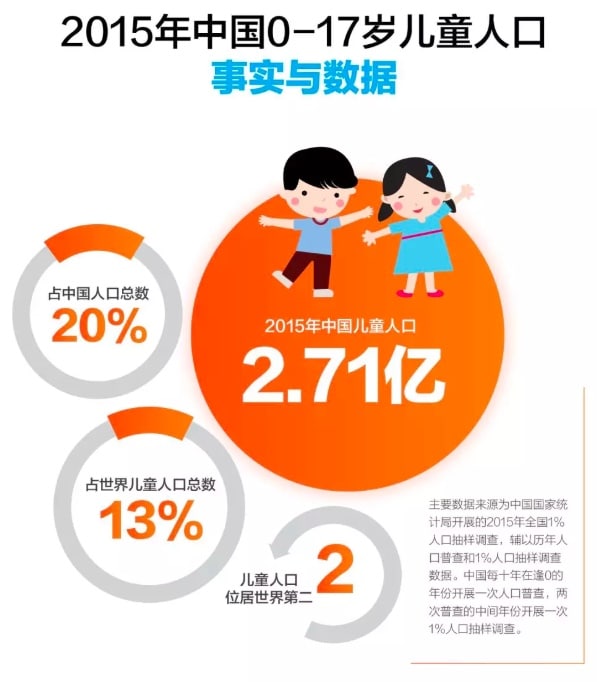 In 2015 there were 271 million children in China. Children make up 20% of the Chinese population, and they make up 13% of the total global population. China ranks second in the world for number of children. 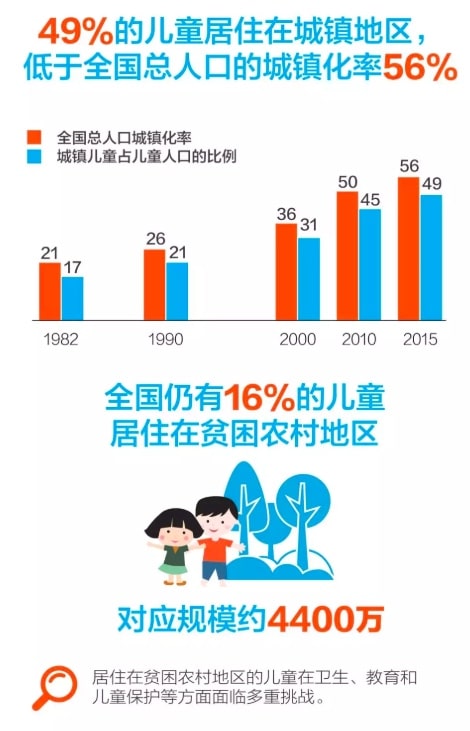 49% of children live in urban areas, lower than the national average of 56%. 16% of children still live in deprived rural areas, which equates to around 44 million children. Sanitation, education and safety are all challenges for children living in these areas. 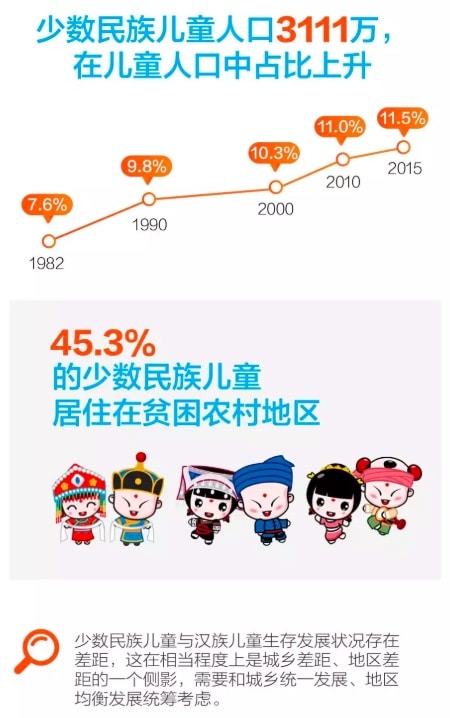 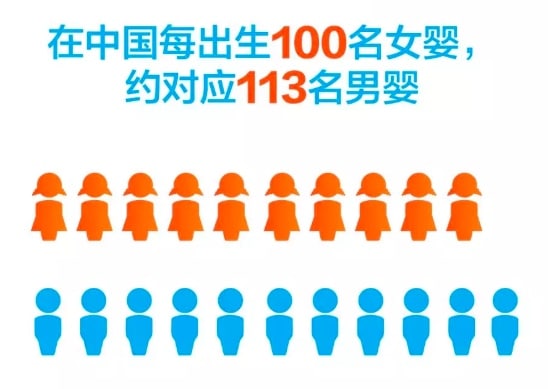 In China for every 100 baby girls born, there are 113 baby boys. Internationally it is accepted that for every 100 female births there naturally occur 103-107 male births. China has the most serious sex ratio imbalance in the world, and because of this there are 34 million less women than men. 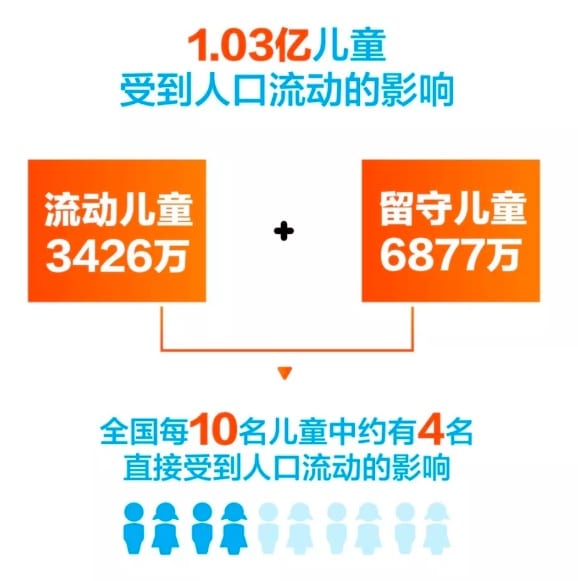 103 million children have been affected by population migration, including 34.26 million migrant children and 68.77 million left-behind children. Nationally, 4 out of 10 children are directly affected by the movement of the floating population. Migrating children who leave their home villages lose the support of the local communities and are left without a support system. They face challenges in attending school and accessing medical care and social insurance in urban areas. 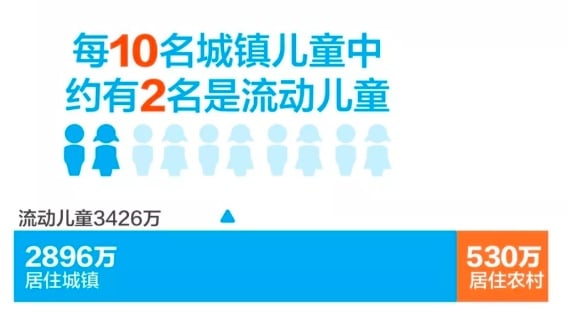 One or both the parents of left-behind children leave their homes to work, which leaves them finding it difficult to gain enough emotional and educational support, impacting their physical and emotional development. 2/10 of urban children are migrants (out of the total 34.26 million migrant children, 28.96 live in urban areas and 5.3 million live in rural areas). 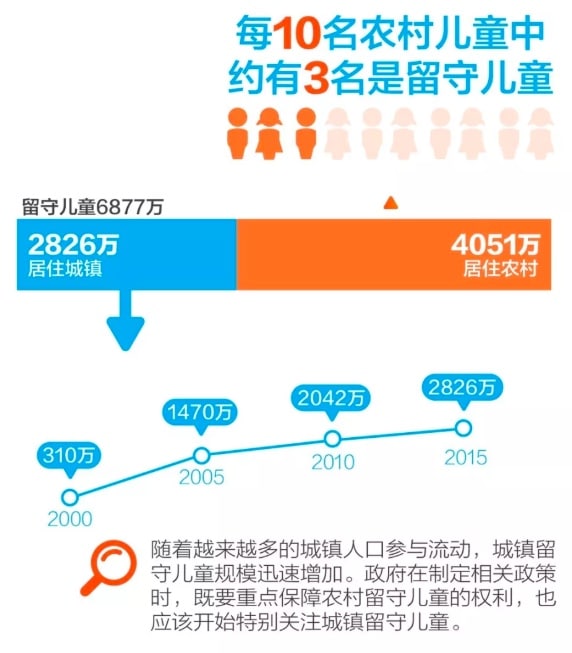 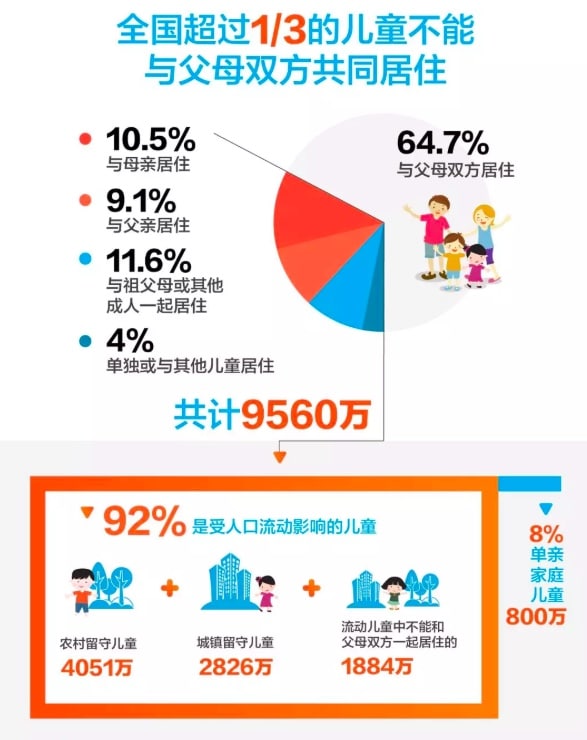 The absence of either parental figure will impact the development of the child. Children who live alone, children in single parent households, children of migrating families and left-behind children require special attention.

Over 1/4 of 0-2 year olds are cared for by people other than their mothers. During the early development of the child, the absence of care from either parent, and especially the mother, is a major cause of lower cognitive functions in later life. On average, children who live with their mothers are better looked after. Both mother and father create and help improve child development.

The status of child education has improved, however there are still challenges ahead. 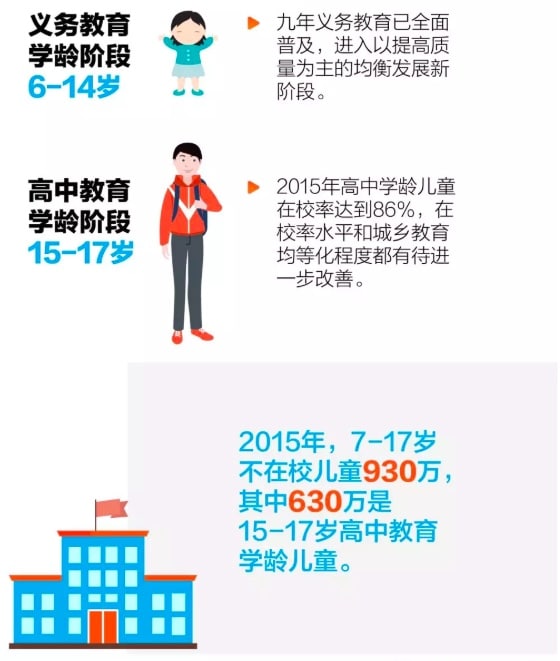 After seeing all of this, are you ready to join us in making a better future?

PrevPreviousRehabilitation and aid systems for disabled children established by the State Council
NextClaiming the Space for an Independent, Progressive Civil Society in ChinaNext