This is our translation of an article originally published by the China Charity Research Institute on the 20th of April 2018. You can find the original here. This translation has been slightly abridged for brevity and clarity.

From the “Ice Bucket Challenge” to charity dinners, celebrities in various fields are using their influence to participate in charity, bringing positive energy to society and taking on an irreplaceable role in increasing public understanding and support for charitable causes.

Since its first release in 2013, the Chinese Charity Celebrity Ranking has become an annual evaluation of the actions of performers, artists, athletes and hosts in the fields of public welfare and charity. 30 celebrities with outstanding performances in these fields are selected every year, by assessing the annual totals of their personal direct and indirect donations, their charitable activities and their personal influence on public welfare. By summarising the Chinese Charity Celebrity Ranking from 2013 to 2017, collecting and analysing the traits of the celebrities on the lists, the ways that they engage in charity and the particular fields they focus on, we can develop a systematic understanding of how Chinese celebrities engage in charity, and discover what the future trends will be.

The defining features of Chinese celebrities’ engagement in charity

1. The number of people listed has increased year by year, and more and more celebrities donate as couples.

In the five years between 2013 and 2017, a total of 95 celebrities made their way onto the Chinese Charity Celebrity List. In 2013, the 30-place list actually included 36 individual celebrities, since there were five couples, Faye Wong & Li Yapeng, Zhang Guoli & Deng Hao, Zhang Jie & Xie Na, Fan Weiqi & Chen Jianzhou and Ma Yili & Wen Zhang, as well as the Yu Quan group. In 2014, there were 31 celebrities on the list, including one couple, Zhang Jie and Xie Na. In 2015, 35 celebrities appeared on the list, including four couples, Huang Xiaoming & Angelababy, Yang Mi & Liu Kaiwei, and Jia Zhangke & Zhao Tao, and the TFBOYS who were included as a group. In 2016, there were 37 celebrities on the list, the highest number ever, including Huang Xiaoming & Angelababy, Tong Dawei & Guan Yue, Xu Zheng & Tao Hong, and Yuan Hong & Zhang Xinyi, a total of four couples, and the Yu Quan and TFBOYS who were both in the list as groups. In 2017, there were 37 celebrities selected, including Huang Xiaoming & Angelababy, Fan Bingbing & Li Chen, Tan Dawei & Guan Yue, Deng Chao & Sun Li, and Wu Jing & Xie Nan, for a total of five couples, and the TFBOYS who ranked first in the list, appearing as a group.

From the data, we can see that more and more celebrity couples choose to engage in charity as couples, and after getting married many celebrities will follow in the footsteps of their partners and get involved in charity. Through the influence of both sides, the couples can achieve a charitable effect that is bigger than the sum of its parts.

2. Male celebrities take up more than half of the list, and have a bigger presence than women. 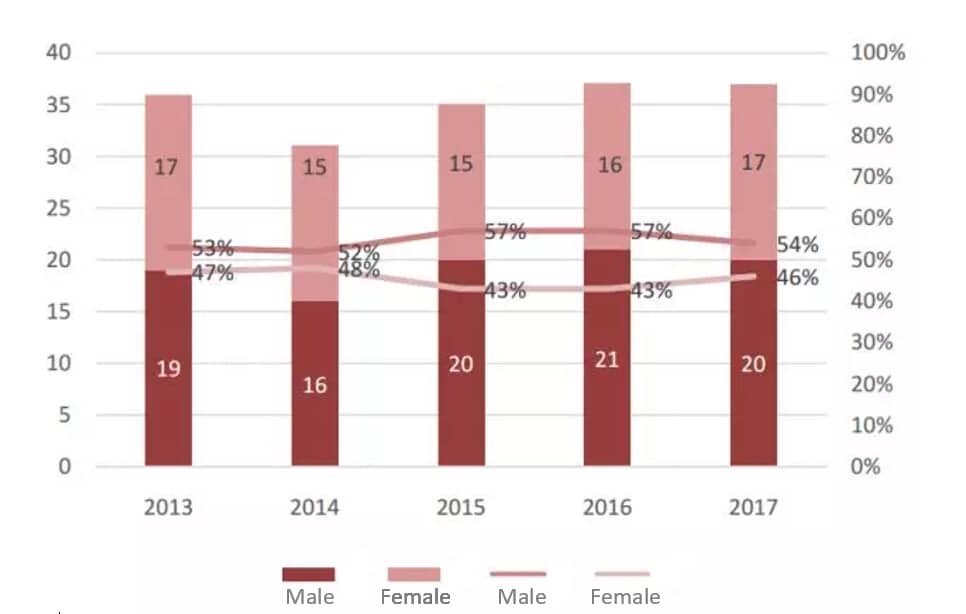 Figure 1: Breakdown by gender of the celebrities on the China Celebrity Charity Ranking from 2013 to 2017

3. The celebrities who make the ranking tend to be young. Celebrities born in the 90s have become a new force in philanthropy.

The age composition shows that, over time, there has been an overall tendency for the celebrities in the ranking to get younger. Celebrities born after 1980 rapidly increased in number from 22% in 2013 to 46% in 2017. Celebrities born before 1970 progressively declined in number year by year, plummeting from 13 (36%) in 2013 to four (11%) in 2017. Celebrities born between 1970 and 1979 were the most in number for every year, accounting for over 40% of the total number of celebrities in the list. With their overall number fundamentally stable, they are the main force behind celebrity participation in charity in China. Celebrities born between 1980 and 1989 were the second highest in number in each year, with their numbers tending to rise year by year. Significantly, celebrities born after 1990, with “EXO Four Sons Returned” and the TFBOYS in the lead, entered the list for the first time in 2015. They quickly took the top spot in 2017, turning into a new force which cannot be ignored. 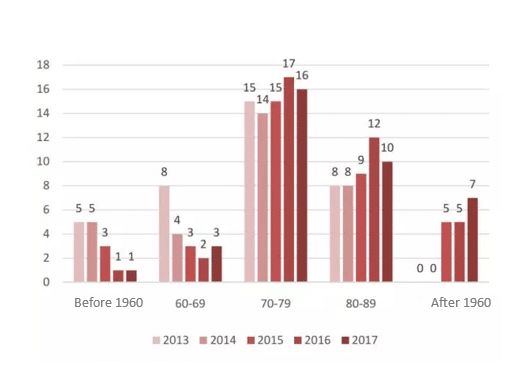 Figure 2: Years of birth of the celebrities on the China Celebrity Charity Ranking from 2013 to 2017

4. The popularity of traditional sectors like education and disease relief has not declined, but there is an increased interest in the area of equal rights advocacy.

The researchers used public channels such as media reports and the official websites of foundations to scan through the charity events attended by the celebrities in the ranking. They then organised and summarised the main charity sectors that the celebrities in each year’s ranking focused on. As these may have changed over time, the researchers gathered and summarised the charity events for each year in the case of celebrities who appeared in the ranking multiple times.

The results show that traditional charity sectors such as education and disease relief are popular with celebrities. A series of public welfare projects starring well-known figures, including “Ali’s Heart”, “One Hundred People Aid” and “Smiling Angel”, all belong to this category. Gender equality and related fields increased in popularity in 2016 and 2017, with celebrities focusing mainly on the areas of gender equality and refugees. For example, Hai Qing and Tong Dawei served as UN Women Goodwill Ambassadors, Guan Yue served as a “HeForShe Advocate”*, Yao Chen served as UNHCR China Goodwill Ambassador, etc… Focus on sectors such as poverty alleviation and disaster relief decreased. While the overall popularity of sectors such as culture and sports was fairly low, celebrities involved in such areas generally maintained a focus on them. For example, Yao Ming has held the “Yao Foundation Hope Primary School Basketball Season” through the “Yao Foundation” for many consecutive years. This sports enlightenment project, developed through the Hope Primary School, promotes the popularity of basketball and allows children in impoverished areas to enjoy sports**. 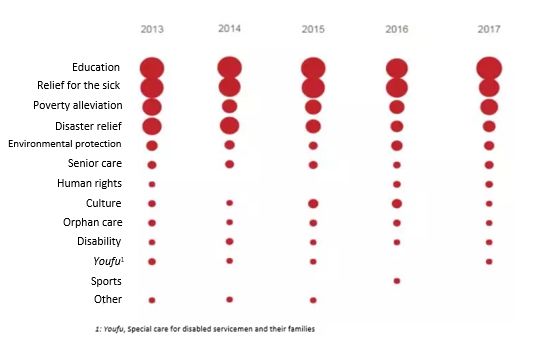 Figure 3: Sectors of focus for celebrities in the China Celebrity Charity Ranking from 2013-2017

5. Fan-based charity has become a new trend in celebrity philanthropy.

The researchers examined the charitable activities of celebrities who made the ranking in each individual year, and roughly summarised the four ways in which they participated in charity: direct funding, support through influence, direct participation, and fan-based charity. Direct funding refers to donations or social activities made or carried out in the name of the celebrity, an affiliated company or work studio, or in the name of a charity foundation or special charity fund established by the celebrity. Support through influence refers to celebrities participating in charity by using their own social influence and brand appeal, serving as ambassadors for public welfare projects and attending charity dinners or charity performances. Direct participation refers to celebrities participating directly in the implementation of charitable projects such as education in undeveloped areas, medical care and poverty alleviation or in volunteer services. Fan-based charity refers to celebrities’ fans who take the initiative and launch charitable actions in the name of the star.

Looking at the ways in which celebrities participated in charitable activities between 2013 and 2017, direct financial contributions was the main form of participation, accounting for 43% of all forms of participation during this period. Coming in second was celebrities providing support through their own influence, which accounted for 33%. Direct participation accounted for 18%. While only making up 6%, fan-based charity represents a growing trend, rising from 2% in 2014 to 8% in 2018, which shows a continuous trend of year-on-year growth.

Charitable appeals launched by fans have already become a major growth point in terms of celebrity participation in charitable activities. Fan-led charitable appeals were first initiated in China by “superwomen” like Li Ningchun and Zhou Bichang, and through many years of quiet influence they have been carried forward among the fans of younger celebrities like EXO and TFBOYS.

As the first case of “fan-based charity” in China, in March 2006 Li Ningchun and her fans (known in Chinese as “yumi”) supported the creation of the “Yumi Compassion Fund”, the first charity named and endorsed by the fans of a celebrity, established by the China Red Cross Foundation. Li Ningchun also assumed the role of the Fund’s spokesperson-for-life. The founding of the Yumi Compassion Fund not only allowed Li’s fans to express their love and support for her by taking part in charitable activities. It also constituted a pioneering case of Chinese celebrities participating in charitable activities.

On TFBOYS member Wang Yuan’s seventeenth birthday, his fans carried out 88 supporting activities, including 39 charitable ones. The content of the 39 charitable activities ranged from signal towers to charity concerts and from physical donation boxes to Zhifubao “red packets”. Huge advancements were made in the sheer number, professionalism and innovativeness of these activities compared with the ones made to mark Wang Yuan’s sixteenth birthday.

Trends in the participation of Chinese celebrities in charitable activities

1. Promoting the development of a professionalized, systematized charitable sector.

With the development of the charitable sector and the accompanying improvement of related laws and regulations, the participation of Chinese celebrities in charitable activities is becoming more professional and systematic. In the past Chinese celebrities’ efforts to take part in charitable activities were quite unprofessional: most activities simply amounted to donations of money or goods, and lacked any comparable organizational development. Information transparency was inadequate, which lead to inefficiencies and internal corruption.

Now when celebrities take part in charitable activities, they not only make donations and advocate on behalf of the cause; they also engage in a deeper analysis of society’s needs and work with other celebrities – each with their own area of expertise – to create specialized funds, establish charitable foundations and invest in innovative social programs. Worthy of particular note and praise are developments in the area of organizational structures, regulatory compliance design, information transparency and charitable innovation. One could say that celebrities are using their own activities to promote the overall advancement of China’s charitable sector.

2. Promoting the popularization of charitable activities.

The participation of Chinese celebrities in charitable activities has grown in recent years. This translated article explores this trend by analysing the Chinese Charity Celebrity Rankings since 2013.