A Feminist’s Portrait: Diversity is One Way to Deconstruct Patriarchy

Editor’s Note
Feminism is becoming a heated topic in China. For a very long time, feminists in the country have been misrepresented and stigmatized as a small group of radical women with ideas beyond the pale. In order to provide an example of what a Chinese feminist really looks like, we present the life story of Jiugu (also known as Evangeline Z ), a Beijing-based feminist activist and social innovator.

On an early December day in 2017, Jiugu is to be found at the rehearsals of a feminist play named “Our vaginas, Ourselves”, giving advice to the cast as a former actress in the play itself and a member of Beijing-based feminist group BCome, the play’s organizers. “Louder! More emotion!”, she hollers several times. From time to time, when words are too feeble to express what she means, she stands up and passionately demonstrates the moves herself. With a few pimples clearly spotted on her plain, oval face, a pair of round glasses on her nose, a grey turtleneck sweater and a pair of wide-leg pants, it is perhaps rather hard to link this 24 year-old, who looks a bit like a math teacher, with the cold and glamourous rapper with black smokey eyes and blood-red lips singing China’s first original feminist rap piece.

The idea of combining feminism and rap has won Jiugu quite some advocates, and her music video has garnered 210 million views and nearly two thousand likes since its release on her public Facebook page on October 22, 2017. However, the homely verses, beginner-level rapping skills and crude quality of the music and video also led to a deluge of criticisms. Though English subtitles are provided, many foreign viewers simply could not get a complete grasp of the lyrics due to the language barrier. Here is one comment on Facebook: “This is literally garbage. Not only are your lyrics shit and come from a severely uneducated place, but your music sounds like it was made in 25 minutes in garage band. I guess those Chinese boys really made you upset.”

The 24-year-old seems immune to all the noise. Instead, as an amateur rapper who has just made her very first rap, she fully acknowledges the criticisms of the piece’s professionalism. “I think yes, this piece has many defects. We are a grassroots team. Our mixer only learnt how to remix for that song, my rapping was recorded with my own microphone, and all the actors in the video are volunteers. We barely spent any money on it.” She does not mince her words: “some say that the indelicacy ruins the good concept behind the work, but I think it’s already something to be doing it at all.”

The controversy certainly did not stop Jiugu from continuing her career as an amateur rapper. After all, her rap has catapulted her into the position of China’s best feminist rapper, since she is so far the only one. Most importantly, it is more the ends than the means that matter. For this young feminist, rap is mainly to convey and promote an explicit feminist idea, and not the other way around. In order to achieve this goal, Jiugu doesn’t confine herself to one profession. “I am a slash youth” is how Jiugu defines herself. Rapper, actress, stand-up comedian, community manager and event planner, she tries her hand at everything. “Diversity is one way to deconstruct patriarchy” she says, “and the starting point is the diversity of women’s career choices.”

Born in a middle-class family in Beijing, Jiugu is quite lucky compared to the many baby girls who were miscarried in the 90s. Raised with tonnes of love and care by parents whose gender roles are quite different from the traditional ones, Jiugu had rarely encountered any form of gender discrimination. She did notice society’s preference for boys yet like many others, she used to take it for granted and paid no attention to gender issues before landing on American soil seven years ago. 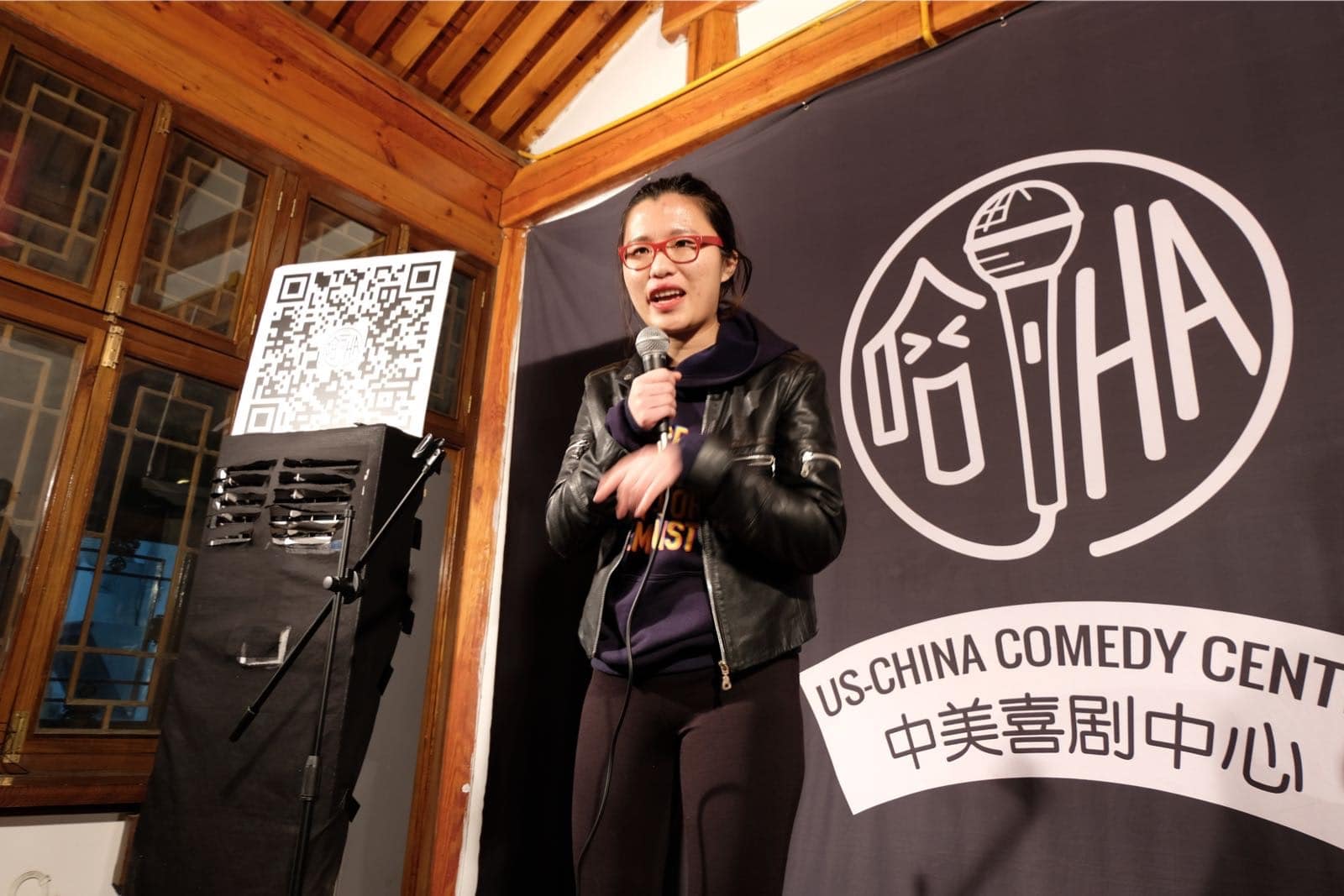 Jiugu performs her stand-up comedy at a Beijing venue

In 2011, Jiugu started her studies in UC Davis as an undergraduate student majoring in psychology. The second year, she became a member of a famous hippie cooperative in the university called “the Domes”, created back in the 70s as a communal housing experiment by the students. There she lived in igloo-like fiberglass domes that her mother named “raccoon houses”, and ran the community according to common consensus with other residents from various backgrounds who were keen on social movements. It was a life-changing experience, as she was suddenly exposed to a free, open and pluralistic environment.

Influenced by her friends in the community, she started to pay attention to topics related to social justice and equality, of which gender is an important part. “I realized at that time how diverse yet unfair our society is, and how everyone should be empowered with equal rights. But in the beginning I didn’t recognize myself as a feminist because I thought feminism is just part of social equality as a whole, and I didn’t think it is my only concern.”

In 2012 she took a class on feminism, where she received systematic knowledge and training on gender equality and had the chance to do some research on the subject. Based on the data she saw, she gradually realized the fact that in this society most oppression is towards women. “This is not something I’m asking you to agree on, this is a fact.” This finding greatly shaped her life and thought patterns, and most importantly, turned her into a feminist. Thereafter she started to become more aware and learn more about the discrimination against women in real life.

Living in a hippie community, Jiugu was a regular at concerts. One night, when she was looking at the bands on stage, she realized that she could barely see any women. She was shocked at the time not only because of this finding, but also that she had been blind to this kind of thing for so long. The issue of the lack of women in various professional fields thus caught the eye of the young feminist.

After graduation in 2015, Jiugu stayed in America and took a gap year to explore herself and society. She had no money or full-time job, and she lived on the sofas of friends. “A real vagabond” is how she describes herself. But Davis is the sort of city where you can survive literarily by doing anything. She saw people make a living by being storytellers, wardrobe designers, babysitters and other unconventional professions that she never thought could be a career option. The young graduate made full use of her time there to do whatever interested her, attending workshops, taking classes, taking UX testing for websites, starting a non-profit business, doing stand-up, making speeches etc… “From these experiences, I realized that there are many possibilities in life and you have uncountable ways to achieve your goals.”

One year later, the rover finally took the plane back to China and decided to make a difference to her homeland with all the expertise she brought back from her previous experiences. Instead of directly working in NGOs that promote women’s rights, the young feminist had business in her sights: “NGOs cannot run by themselves, they need support from enterprises. It is more efficient to mobilize the resources from the mainstream to achieve our goals. In China, the NGO sector has long been marginalized by society and it is hard for them to make their voices heard.” And the ultimate ambition is to become successful. “Success means influence, resources, the chance to turn words into reality and ultimately the power to push society in your direction. Winner takes all.”

To make sure it happens, Jiugu doesn’t put all her eggs into one basket. After resigning from an internet company where she worked as a community manager, she is now a freelance stand-up comedian. Once or twice a week, she performs at comedy clubs that are holed up in Beijing’s small hutongs. She is one of the few Chinese females to perform bilingual stand-up in Beijing. Sharp and funny, her dramatic performances and witty responses easily ignite the house. She uses ironic jokes as a weapon to address and demolish gender inequality and white supremacy. Otherwise, you can also find her attending science and technology conferences at fancy hotels, acting on theatre stages, organizing workshops, giving public speeches, performing her rap song here and there, and joining in panel discussions at the city’s hives of activity. Needless to say, the subject of most activities is related to gender and feminism. “Feminism is what I believe in, and it has guided many choices in my life and shaped the way I observe our society. Feminism is, to some extent, becoming my lifestyle.”

In order to solicit more attention to the problem of gender segregation in many industries, the 24-year-old activist started an open source interview project named “femployee” – a combination of “feminist” and “employee” that specifically focuses on the career choices and development issues faced by women in society. More than 90 volunteers were recruited to take part in interviewing professional women in various sectors.

Nevertheless, being a feminist is not all happy times. In a country like China that has a long patriarchal history and a tradition of regarding men as superior to women, being a feminist and acting as a feminist takes courage. According to Jiugu’s own experience, “it’s like coming out of the closet.” Reproaches and misunderstandings are commonplace. She sometimes finds herself embroiled in inexplicable quarrels after coming forward for other women. She was once having dinner with some artists, and one female artist was constantly being taunted by her male fellows for providing financially for her male partner. As a feminist with a sense of justice, Jiugu simply could not stand hearing words bordering on “slut-shaming” towards another woman in her presence. She immediately alerted everyone to their inappropriate jokes, but only ended up in a meaningless dispute and being told that she was interfering in other people’s friendship.

But it was not without gains. The female artist started to resist this kind of offensive jokes, which she failed to do before Jiugu came forward. Many of Jiugu’s acquaintances gradually raised their awareness of gender equality, and a lot of people will ask her advice when they encounter sexual harassment or gender discrimination.

“Feminism is the trend. With more and more women enjoying independent financial support, the awareness of freedom has been awakened. So I think this is the time, and I want to play my role in something that is in line with the rules of nature and the trends of social development.”

The portrait of a young Beijinger who uses rap and comedy as a means to convey a feminist message.