Today, March 22, is World Water Day. We would like to take this chance to introduce a project run by a Chinese NGO to alleviate China’s problems of water security.

Although China ranks sixth in the world for total freshwater resources, its water resources per capita are only 1/4 of the world average. More than 400 of the country’s 600 cities are considered to be short of water, and 110 cities are deemed to suffer from “extreme shortages”.

According to continuous monitoring of the data of 118 cities, about 64% of urban groundwater suffers from very heavy pollution, about 33% suffers from moderate pollution, and only 3% meets basic standards of cleanliness.

A 2012 report by Prof. Avraham Ebenstein, from the Hebrew University of Jerusalem, points out that a severe deterioration in water quality has been closely related to the increasing number of cancer cases in more than 247 villages in China.

As we can see, China has been plagued by a growing water security crisis for a long time, especially in rural areas. Fortunately, many people are making a great effort to solve the problem, one of them being Ren Xiaoyuan, the founder of MyH2O, a platform whose aim is to conduct water quality monitoring in the countryside.

Inspired by a large database of the water quality of every public well in India, Ren Xiaoyuan founded MyH2O with Huang Shuling in 2015. He planned to recruit research groups to conduct water quality investigations and collect environmental information in rural areas, with the goal of building a platform for solutions for safe potable water in the country, and to raise awareness of the water security in villages. 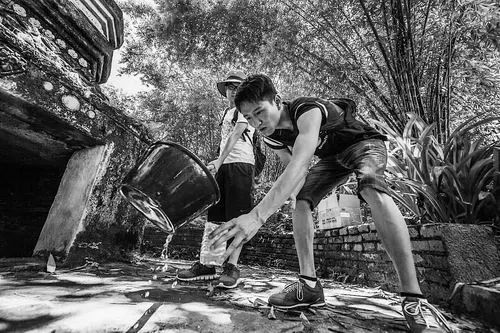 In the last three years, teams from MyH2O have visited nearly a thousand villages in China to collect water security information. Now 16 teams are heading to Sichuan, Jiangxi, and Xinjiang to conduct research after taking part in an online training program by MyH2O.

“I’ve found that many institutions provide in-depth solutions for water quality improvement in rural areas, but they don’t know where the problem lies due to lack of information. We have not only bridged the gap between problems and solutions, but also produced some in-depth solutions ourselves by improving the big data available”, Ren Xiaoyuan explains.