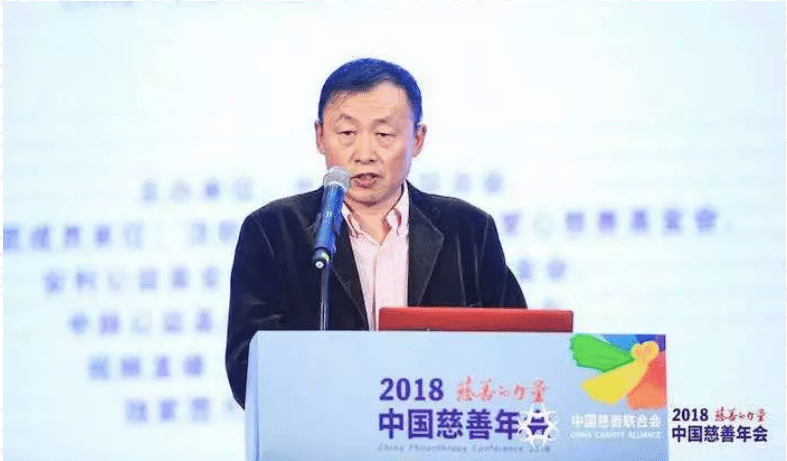 On January 14, the 8thth annual China Philanthropy Conference was held in Beijing. The theme of this year’s conference was “Philanthropy and Reform and Opening up”, primarily focusing on the last 40 years of achievements associated with philanthropy and Reform and Opening up. Focus was placed on achievements in poverty alleviation, while also forecasting further developments in China’s philanthropy and actively responding to vocal calls from the sector to deepen reform, in order to stimulate the sector’s confidence. Wang Ming, Professor at the Tsinghua University’s School of Public Policy and Management, as well as Dean of the Institute for Philanthropy, Tsinghua University, and Head of the Institute for Social Governance and Development, Tsinghua University, attended and delivered the keynote address of the conference.

It is a great honour to have the opportunity to stand upon this stage and share with everyone our reflections and research regarding philanthropic organizations. I will be using 20 minutes to discuss some of the major and minor trends that have emerged within the context of a flourishing philanthropic movement on the rise, and to discuss the opportunities and challenges we face.

I will focus on the following five issues:

We have witnessed the total number of social organizations increase from 100,000 to 820,000. Although Professor Zheng mentioned that two years on from the enactment of the Charity Law the number of certifications of charitable organizations is not ideal, we have nonetheless already witnessed their emergence.

Especially the development of social organizations has led to a very strong developmental impetus. We saw this vigorous impetus for development first appear 40 years ago, and it resurged with vigor 10 years ago.

2 Engines of Change in the Background

These ten major trends reflect the enormous changes in this field. From social organizations to philanthropic organizations, and from the relatively non-mainstream to the mainstream, we have seen trends towards mainstreaming, public welfare, the rule of law, transparency, cooperation, self-discipline, co-governance, symbiosis, trans-border partnerships and systemization.

Within this process, there are actually several microtrends that are very worthy of attention. This is something that I particularly want to emphasize. These trends also represent important challenges facing charitable organizations.

The “microtrends” in question are very useful for every charitable organization. As Mang Ge once said, “the macro-level is something we must accept. The micro-level, however, is where we can make a difference.”

What kind of Microtrends?

We have put forward a very important concept called skill professionalization. We have tracked social and charitable organizations over a long period of time, paying particular attention to the recent flourishing of cooperation between government and society.

Over the past decade, government and community cooperation has shown a momentum of vigorous development, primarily, although not entirely, in the field of consumer services. Many social organizations, and particularly charitable organizations, are actively investing in government and community cooperation in consumer services, reflecting a mainstreaming of this trend.

We use a concept called “skill professionalization” to consider and research some related issues that are worth paying attention to. This concept of skill professionalization is a category of institutional economics, and through this conceptualization, we can think about and research cooperation between charitable organizations and the government, and draw some important conclusions.

In contrast with the specialization of capital or technical ability, we have put forward the idea of “skill specialization”. It is a concept that is still being improved upon. I published an article in this year’s Volume 1 of the China Non-Profit Review, which focuses on discussion of this concept of skill professionalization.

Revolving around this concept, in the past we have tracked many social organizations in different fields of study, including AIDS prevention, environmental protection and community governance. We have found that this concept can be used to comprehensively and systematically study the internal mechanisms of cooperation between charitable organizations and the government.

I define this concept as a type of organizational ability that social organizations express in their cooperation with the government. More specifically, it is expressed as cooperation with the government; doing deep and meaningful work in a specific field, and over a long period of time; producing outstanding work; having a professionalized staff and volunteer crew; and the stable relationship with partners, including the government, developed through long-term experience and accumulation of social capital.

We give it a four-dimensional view; the first dimension is that aspects of the field are displayed through deep and careful work in that particular field; the second is that within the team there is professional staff, team and volunteers; the third is that there should be an extremely close and stable cooperative relationship with the government; the fourth is that it should show related attributes; in this process it forms attributes such as being non-profit, non-competitive and having a cooperative symbiosis.

In Taiwan there are some corresponding processes that support the forming of a professionalisation of skills, and corresponding systems and mechanisms. But in comparison to the Mainland, in the sphere of AIDS prevention what we see is exactly the opposite; the support of policy systems is not strong enough, and the support of talent training systems is not strong enough. At the same time, there is also one extremely unfavourable and competition-based examination and evaluation mechanism, and we especially need to stress that this evaluation system is not only carried out by the government, but in reality it also comprises international organisations, and international organisations also require these kinds of ‘seeking instant benefits’ mechanisms.

The greatest challenge for social organizations comes from the lack of professionalization of skills, which manifests itself in the organization’s specialization in certain areas of cooperation with the government, the professional team it has, the social capital accumulated from years of experience, and many other aspects.

Recommendation: adjust policies with a focus on professionalization of skills

At the same time, we find some important disadvantages in government procurement services, where adjustments and reform of unfavorable policy mechanisms around assessments can help to establish and improve the system of appraising the professionalization of skills. This can then encourage social organizations to develop professionally, establish specialized teams and increase their professionalization of skills, in order to improve the overall ecology of social organizations.

These conclusions and recommendations are most suited to charitable organizations in the context of the current systems and policies. After the introduction of the Charity Law, charities are the most institutionally developed out of all social organizations, and their greatest challenge still lies mainly in the insufficient professionalization of skills.

Before the introduction of the Charity Law, we faced two challenges, an institutional bottleneck and a funding bottleneck. Now that both these bottlenecks are largely overcome, the main challenge we face is the lack of professionalization of skills.

The difference in professionalization of skills is dividing our charities into two types. There are several charities that are able to access resources and opportunities in the midst of collaborative symbiosis, strengthen professionalization of skills and achieve innovation and growth. They can be found among foundations and in environmental protection, AIDS prevention and treatment, and community building, but they are few and far between. The majority of charities are still fluctuating between being social organizations and being charities. The best proof is that there are only five or six thousand recognized charities.

Our translation of a talk by Tsinghua Professor Wang Ming, looking at the current situation of China’s social organizations.