An Overview of Chinese Foreign Aid: a Rising Player in Need of Improvement

Given its economic strength and its willingness to provide aid to other countries, China is now a rising player in nearly every aspect of international development cooperation, and its status has been a heated topic for years. For a long time China was regarded mainly as an aid recipient, and the foreign aid it received from developed countries played a significant role in its modernization and social development. But China is actually also a veteran in terms of providing foreign aid. It first became a donor country in the 1950s, and until the end of the Maoist period it continuously involved itself in providing ideologically-driven financial support and food aid to countries with socialist characteristics like the DPRK, Albania and Vietnam.

Since the start of the twenty-first century the world has witnessed China’s rapid social changes and high economic performance, and the calls for China to behave as a responsible country in the international community have become more intense. In what could be seen as a response, China has adjusted its development policies, seeking more synergy and cooperation with its aid beneficiaries beyond just material aid.

As a result a series of forums have been established, such as the Forum on China-Africa Cooperation, the China-CELAC Forum and the China-ASEAN Forum; and China has also taken a more proactive and leading stance within the international development sector by creating the Belt and Road Initiative, the Asia Infrastructure Investment Bank, the New Development Bank (formerly known as the BRICS Development Bank), the South-South Cooperation Fund and other new initiatives. It has publicly committed itself to fight climate change and deliver on the Sustainable Development Goals. For instance, following the withdrawal of the US from the Paris Agreement on climate change, China reaffirmed its commitment to promote and support multilateral cooperation on this matter. It is undeniable that the world’s current state of ambiguity has handed China an excellent opportunity to step forward and further demonstrate its leadership role in international development.

According to data derived from the China Africa Research Initiative, Chinese foreign aid expenditure has seen a steady increase from 2003 to 2015, with an average annual growth rate of about 14%. Although the expenditure decreased to $2.253 billion in 2016, compared with close to $3 billion in 2015, it exceeded $2.5 billion again in 2017 according to officially published data from the Ministry of Finance. 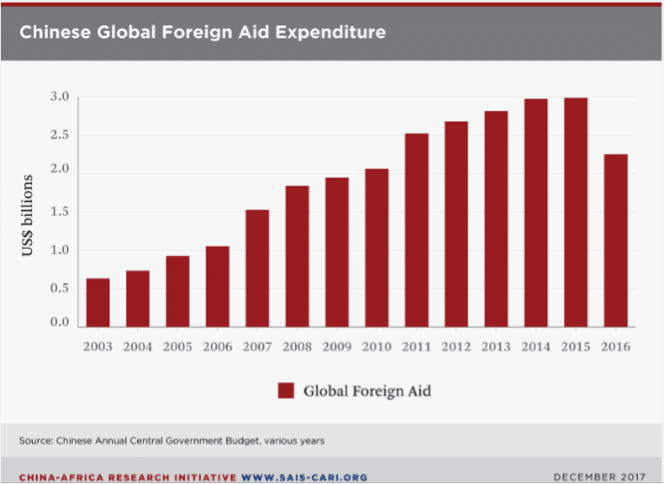 The Chinese government also released white papers in 2011 and 2014 introducing its agenda and achievements in foreign aid, and it specifically explained that China’s foreign aid falls into three categories: grants (aid gratis), interest-free loans and concessional loans. The first two come from China’s state finances, while concessional loans are provided by the Export-Import Bank of China as designated by the Chinese government. AidData provides data on the top ten recipients of China’s foreign aid from 2000 to 2014 (see the figures below), and it is no surprise to find out that a majority of them are African countries.

According to the UN’s official classification, three of these countries (Ethiopia, Tanzania and Cambodia) are currently classified as “least developed countries (LDCs)”, while the remainder are classified as developing or emerging economies. Least developed and developing countries should theoretically benefit from this capital influx, which provides their societies with resources for welfare improvement and social development. Nevertheless, there is a constant worry that corruption in the receiving countries can be an obstacle for aid delivery, and that the local governments might not use the money efficiently due to lack of capabilities. These factors cast doubt on the outcome of China’s foreign aid, especially when it is allegedly unconditional. Therefore, evaluation mechanisms by the Chinese side should be set up to make sure of the sustainability of the aid and the accountability of the recipients.

The concept of foreign aid came into being in the West after the Second World War, and the West still dominates the conceptual framework that surrounds it. It is clear that the Chinese government understands the significance of widening its aid spectrum from material support to experience and model sharing. Expressions like the “Chinese model” and the “Chinese experience” have often been used by Chinese scholars, and in the white book of China’s foreign aid (2014) we find narratives like “China shares its experience and technology with other developing countries through human resources and technical cooperation, as well as through volunteer services, to help other developing countries build their professional teams and enhance their capacity for independent development.”

Wang Yi, the minister of Foreign Affairs, frequently expresses an old Chinese idea of “teaching a person to fish rather than giving them fish” on public occasions. However, these terms still lack clarity in terms of allowing people to understand the core concept of the Chinese experience and the Chinese model of foreign aid. Moreover, the extent to which recipients have absorbed and digested China’s experience and model remains unclear.

The recent establishment of the China International Development Cooperation Agency (CIDCA) attracted attention from the international community, and it is regarded as a signal of the institutionalization of China’s development cause. The agency serves to formulate guidelines, plans and policies for foreign aid, which could perhaps make up for the lack of a systematic theory directing policy-making and project implementation. Many anticipate that the CIDCA could become a new force, backed by strong resources and political willingness, in the global aid arena, which is dominated by institutions from developed countries like the Department for International Development of UK (DFID), the Japan International Cooperation Agency (JICA) and the U.S. Agency for International Development (USAID). There is great room for improvisation regarding how the CIDCA wields its resources, interacts with its counterparts, and helps with the transformation of China’s foreign aid.

In terms of aid practitioners, government institutions like embassies and some state-backed organizations like the China Foundation for Poverty Alleviation (CFPA) are on the frontlines, engaged in activities like food aid, disaster relief, poverty alleviation, health and sanitation, and women’s empowerment. These practitioners are relatively well organized and have the capacity to run projects overseas.

On the other hand, the engagement of China’s grassroots NGOs in the cause of Chinese foreign aid is still minimal. The number of registered “social organizations” (essentially NGOs or non-profits) in China had exceeded 820,000 by March 11, 2019 according to the National Social Organization Data System, and setting aside the few foundations that have an affiliation with the government, most of them are independent and grassroots bodies. Only a few such organizations can afford to participate in disaster relief and environmental conservation activities overseas, and yet they could potentially act as a useful bridge between the Chinese state, Chinese corporate players and the aid recipients, helping to translate funding and good intentions into actual gains for the beneficiaries on the ground. It is important that the government should begin to see its own NGO sector as a significant force in helping China’s image-building within the international community, and provide policy and financial support for grassroots social organizations that want to work overseas.

All in all, there is still a long way to go for China’s foreign aid to come to fruition.

An introduction to China’s growing foreign aid program, including its history, objectives and challenges.

PrevPreviousWang Ming: the Biggest Challenges for Social Organizations
NextAlashan SEE Foundation in international partnership to save the rhinoNext