This article is by Fan Boyu, a Beijing high school student who went all the way to Kenya after seeing an inspiring TED talk by a Kenyan boy who had designed a flashing light that could scare lions and other wild beasts away from the livestock in his native country. After realizing that the available forms of “lion light” are still too expensive for most Kenyan households and suffer from various technical issues, he set about designing an improved and cheaper version, and reached an agreement with Chinese NGO China House (中南屋) to facilitate its distribution.

This is an inspiring story of an idealistic teenager teaming up with a grassroots, independent Chinese civil society organization to help solve an environmental and social problem on the other side of the world. All the quotations in the article come from interviews that the author conducted while in Kenya.

On the night of August 9th 2019, after attending a Maasai bonfire ceremony, I went to sleep in a modest grass hut. I vaguely heard a lion’s roars through the snoring from the Kenyan man on my right. I thought the lion might be getting closer and closer to our house.

My name is Boyu, and I am a student from Beijing No. 4 International High School, with a passion for engineering design. Inspired by a TED talk by Richard Turere, a Maasai boy who designed a blinking light to scare lions away from livestock, I went to his country, Kenya, to understand the role of technology in wildlife conservation.

In Kenya, there are no clear boundaries to divide people and wildlife. More than 60% of wild animals live outside the national parks. As the human population grows and their activities expand, wildlife is pushed into smaller and smaller settlements, causing conflicts between the humans and the animals, such as hungry lions attacking cows and goats or indignant elephants invading farms and eating the crops. As Kenyan newspaper The Star reports, in 2018 compensation claims from the victims of human/wildlife conflict had reached 15 billion Kenyan Shillings (about 145 million USD) over the previous five years[1].

For people like the Maasai, a pastoral tribe in Kenya, this could be devastating to their livelihood.

“Over the last three months a lion killed seven goats in one boma (a livestock enclosure), which basically was all my property,” says Isalah Olekango, one resident in a Masai Community near Nairobi.

When people are threatened by wildlife, the wildlife then suffers as well. “In 2012, 32 lions were killed by people in one month, with only nine lions left in the Nairobi National Park”, says Reinhard Nyandire, a program manager of Friends of Nairobi National Park, an NGO dedicated to nurturing and preserving biodiversity within the park and the broader ecosystem.

To relieve the community from conflicts with wildlife, and keep the wildlife from being harmed by people, various methods have been explored. Building a high-rise or electrified fence around the boma is one of the most traditional solutions, which physically isolates predators from the livestock. But it is neither practical nor cost-effective. The 3.3 meter-tall, electrified fence currently being constructed around the Aberdare National Park in Kenya costs an average of US$20 per meter[2].

Save the Elephant, an elephant-protection NGO, is experimenting with an “Elephants and Bees Project” to reduce damage from crop-raiding elephants. The project explores the use of novel Beehive Fences as a natural elephant deterrent, based on an in-depth understanding of elephant’s behavior and their instinctive avoidance of African honey bees.

Pepper fences are another method. In Mozambique, communities have begun growing more chili plants after elephants were found to dislike and avoid plants containing capsaicin. This creative and effective approach prevents elephants from trampling the fields of the community while protecting the species.

In recent years, a new method has been developed: the lion light.

According to Richard Turere, the Masaai boy who claims to have invented the lion light, it is one of the most effective ways to reduce human-wildlife conflict. The main idea is to set up a series of blinking lights around farms, so that wild beasts will take them as an indication of human activity and move away from the area. 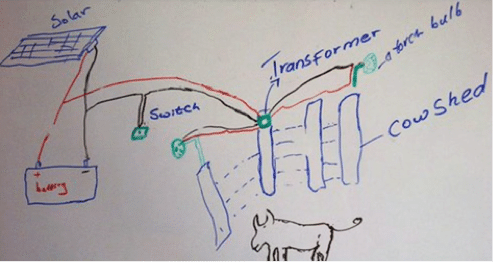 Still a student, Richard seems not to have put his invention into practice very much. In Kenya however there are two other people who have done much more to put the idea of lion lights into practice. 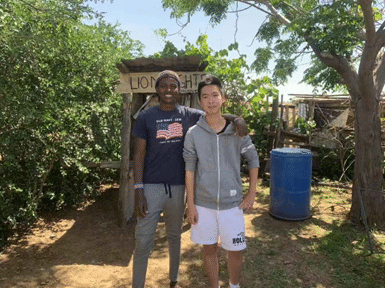 Richard Turere with the author, and his first lion light in the back

David Mascall, a renowned lion expert, has installed Lion lights for 300 boma since 2012. In his system there is a charge control unit in a white box regulating the power, which is charged by a solar panel on the top. All the lights are connected by a cable about two feet underground. Through this system the lights all flash simultaneously, and can be seen from three miles away. 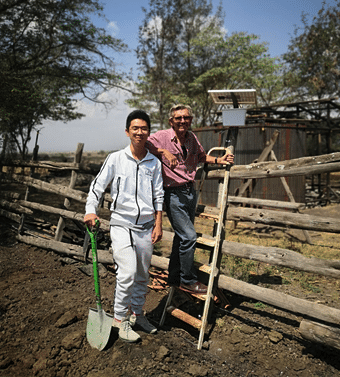 The author assisting David to install his lion lights system in a Maasai boma.

David’s lion light system has been highly appreciated for its average two-year lifespan. The whole system is waterproof because the cables are sleeved by pipes, and each connection takes place within the tube. Even if some rain gets into the pipe, the BLU (Basic Link Unit) tack (a reusable putty-like pressure-sensitive adhesive produced by Bostik) can insulate the water.

Nevertheless, maintenance can still be complicated and expensive. “If one light dies, the whole system cannot work. You have to call an expert to come, and it will cost too much”, according to a member of staff from TWF (The Wildlife Foundation). 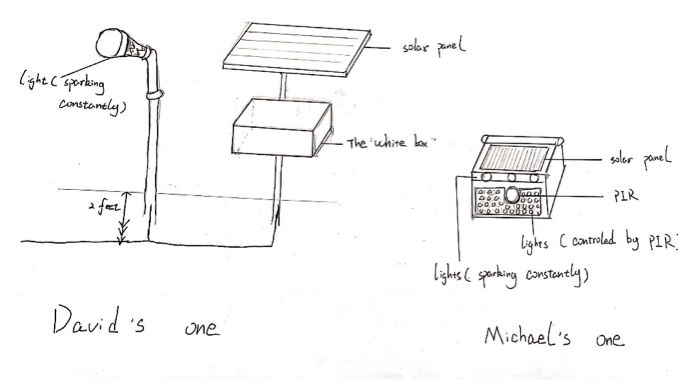 The other lion lights giant is Michael Mbithi, whose product is now at its ninth edition. One unique feature of Michael’s lion lights is that they work independently from each other, so if one light dies, the others still work. It is also a better choice for nomads like the Maasai tribe, due to its portability. 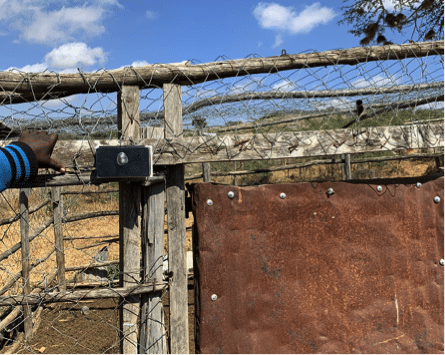 Michael’s version installed in a boma.

Additionally, Michael’s latest edition adds a PIR (passive infrared sensor), which starts to glow when it detects any movement. Apart for the constant light, when a beast comes within eight meters of the PIR another intense light will be emitted and last for 15 seconds, which is similar to the human reaction on seeing a beast. The reason for adding PIR is that the original lights don’t always work well on hyenas, which are also a considerable threat in the area. “They still come and even kill the animals next to the light,” Michael says. So he pines his hope on the PIR, although the effect is still waiting to be tested.

Michael’s new light indeed seems impressive, but its lifespan is just too short. “Although it’s easier to install and fix, the problem is that most of the lights just die within four months, which is not enough”, explains Roosevelt, the chief of the Maasai, when being asked his opinion on the eighth edition of Michael’s lights. 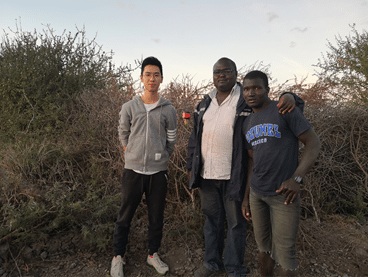 The author testing the Chinese edition of the lion lights together with Michael and a local herdsman.

Until now, the installed lion lights have proven to be quite helpful. Local residents who have installed them claim they are much more effective compared to the methods they used to use. “After installing the lion lights, as long as they are functioning none of the livestock has been attacked,” says Isalah Olekango.

However, the high cost of the lion lights is still a crucial challenge.

Usually, 8 to 10 lights will be used in one boma, and the price of one light, both for Michael and David’s installments, is about 20 dollars. So it will take about 200 dollars to install the lights for just one boma. Since nearly half of Kenyan households earn less than 10,000 Kenyan Shillings (slightly less than 100 USD) per month, it is impossible for a typical Kenyan farmer family to afford such lights on their own.

Currently, almost all of the installed lion lights are sponsored by NGOs. According to Kate from the African Network for Animal Welfare (ANAW), the high expenditure for lion lights immensely hinders NGOs from applying them to more communities.

Based on this situation, I have been exploring whether a cheaper version of the lion lights could be invented, with a more reliable supply system. As such I have created a new model, which I have tried to keep effective while minimizing its cost.

I have kept the essential sparking function. At the same time, I have tried to add an infrasonic emitter, which only costs one-fifteenth of the PIR, to make the light effect. The frequency of the emitter is 40K thousands, which cannot be heard by general livestock but can be sensed by lions and hyenas. Apart from letting predators know that there are humans nearby, it may also irritate them and keep them away.

Moreover, in order to increase the brightness, I harnessed a 3 LED light with 0.75 volts, which can be seen within a range of 4 miles.

In order to improve the lifespan, I utilize 3 Ni-Cd batteries rather than Lithium. As Michael explained, “once a cow came and pooped on the solar panel. Then the panel could not see the sun, and the battery died”. If a Lithium battery stays below 2.4V for one or two weeks, its inner chemical structure will change, which means its capacity will decline. But Ni-Cd batteries don’t have that kind of problem. 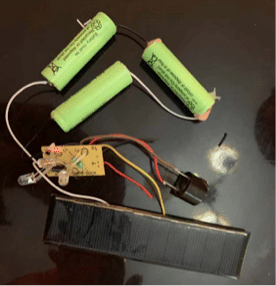 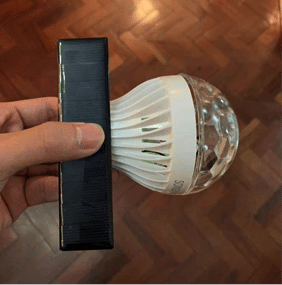 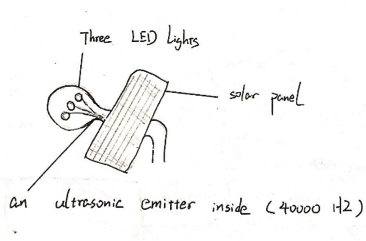 The author’s new model of a “lion light”

Understanding the supply chain is essential. I have contacted dozens of manufacturers in China and logistics companies in Kenya. After negotiations, the final cost was brought down to 61 USD for one boma, which is less than a third of the cost for Michael’s version (200 USD) or David’s version (250 USD).

Furthermore, I have reached an agreement with China House (中南屋), a Chinese organization that sends young Chinese to participate in wildlife conservation and community development projects in Africa. China House has agreed to be a facilitator in this project, to purchase the lights with Chinese funding and work with local NGOs such as ANAW to install them.

Leaving Kenya after an intense trip, I am not sure how this small project could help change the wildlife conservation situation in Africa, but I am glad to have tried my best and to help China become part of the solution, which makes me feel hopeful.

Perhaps my trip did not change Africa at all, but encountering Africa certainly changed me. Apart from gaining knowledge on human-wildlife conflict and lion lights, I have realized that in order to make a useful product, I shouldn’t just focus on the technology itself. Since the ultimate goal is application, many other factors need to be considered.

Besides, this is my first time getting a taste of the real world. I have met people who have dedicated their lives to wildlife protection, and I have also met ones who only seek fame and wealth. All these experiences have taught me what I should do in the future, and given me the courage to explore the world.

The inspiring story of a young man from Beijing who designed an improved solution to keep lions and other wild animals away from livestock in Kenya, and teamed up with a Chinese NGO to put his solution into practice.