Chinese overseas development aid has long been dominated by the state sector. However, an increasingly discussed topic is the role of the non-state – both the for-profit and not-for-profit sectors – in providing development assistance outside of China’s borders. The China Foundation for Poverty Alleviation (CFPA), the largest and most influential Chinese NGO working in the poverty alleviation sector, recently held a ground-breaking forum that addressed this more holistic approach to Chinese overseas aid.

The ‘People’s Forum on International Social Responsibility’ was held at the Overseas Exchange Center of Peking University (北京大学英杰国际交流中心) on the December 16th, 2013. The event marked the culmination of CFPA-funded research projects and the associated release of several publications on the topic of overseas development aid. These included three new books: The Strategy and Roadmap of Chinese NGO’s Internationalization (中国民间组织国际化的战略与路径) by Deng Guosheng; China’s International Social Responsibility and the Role of Chinese Overseas Enterprises (中国国际社会责任与中资海外企业角色) by Zhong Hongwu, Zhang En, and Wei Xiuli; and Strategic Study on China’s Foreign Aid and International Social Responsibility (中国对外援助与国际责任的战略研究) by Liu Hongwu and Huang Meibo. The Forum sought to focus on ‘people’ (the slogan of the forum was ‘people helping people’) and was supported by a number of academic, governmental, and non-governmental institutions, including the Chinese Academy of Social Sciences (CASS), Tsinghua and Zhejiang Normal universities, and the China Association for NGO Cooperation (CANGO).

The Forum was very well attended with over 300 participants, although unfortunately officials from Myanmar were absent as they were stuck in heavy snow in Kunming. Thankfully those who could make it represented a diverse and influential collection of interested parties. Alongside the authors of the books and report papers, there were also high-level government officials, representatives from Chinese enterprises, Chinese and international NGOs, and intergovernmental organizations. CDB’s Executive Director Chen Yimei attended the event in person.

The Aims of the Forum

According to the conference materials, the research project and the forum event had four goals which we paraphrase below:

We at the CFPA would like to encourage a pattern of China fulfilling its social responsibilities worldwide, whereby government decision-making is based on coordinated efforts with NGOs, think tanks, and enterprises. We not only want these organizations to cooperate extensively, but to offer dissenting opinions, alternative methodology, and constructive criticism to one another. We would also like to encourage this form of dialogue in aid-recipient countries, to bolster assistance programs and facilitate aid projects.

We would like to showcase the most positive and constructive examples of Chinese overseas enterprises, as well as multinational corporations in China, strengthening intercommunication on and fulfilling their Corporate Social Responsibility [CSR].

By promoting Chinese media coverage of Chinese entities fulfilling their international social responsibilities, we hope to increase the Chinese people’s awareness of internationalization, especially in the NGO and philanthropic sector.

To demonstrate cooperation on issues of fulfilling Chinese international social responsibilities, we would like the government, enterprises, NGOs, the media, and think tanks to start by launching pilot projects in Africa and surrounding regions. 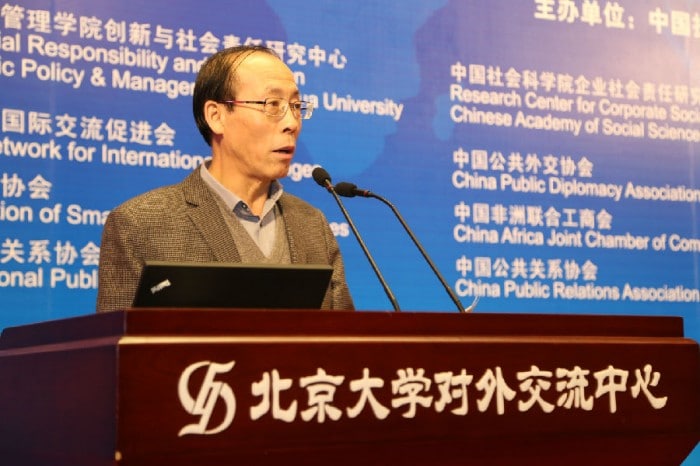 Zheng Wenkai, Deputy Director of the State Council Leading Group Office of Poverty Alleviation and Development, speaking at the Conference.

The Forum commenced with opening speeches by the Executive President of the CFPA, and by several leading government officials. In the afternoon there was a presentation of awards to Chinese enterprises with outstanding records of overseas CSR work, and the forum concluded with closing speeches by the President of the CFPA, and the Secretary-General of the China NGO Network for International Exchanges. The main part of the day was divided up into four thematic hour-long discussions. The first discussion aimed to contextualise contemporary Chinese foreign aid, and was called ‘The Strategic Study of China’s Foreign Aid and International Social Responsibility’. The second focused on the role of Chinese business enterprise abroad, the third looked at the role of Chinese NGOs, while the final discussion, the ‘Study on China’s International Social Responsibility and Myanmar Case,’ focused on a case study of China’s neighbour Myanmar. According to Yimei the primary conclusions of the four discussions were the following:

1) A coherent strategy needs to be developed about China’s role in international development.
2) The Government should co-operate more frequently and effectively with Chinese NGOs in the provision of overseas aid.
3) There remain many institutional barriers that prevent Chinese NGOs from acting overseas. These barriers include constraints on capital, and registration issues.
4) Chinese NGOs still need to significantly strengthen their capacity before they can operate effectively abroad.
5) Domestic public opinion about China’s role in promoting development overseas remains influenced by nationalistic sentiments and the view that China still needs development assistance domestically.

‘Major Achievements’ but Room for Improvement

While the Forum may have identified the many problems that impact Chinese overseas aid, the Forum itself can be deemed a success. Yimei is of the opinion that it represented several significant accomplishments. Firstly, the number and calibre of the participants – more than 300 influential figures from both the state and non-state sectors – impressed her. “For an NGO I think that this is a big achievement. This was the first kind of discussion at such a high level, especially as it was held by an NGO.” In the past, the Chinese government has dominated discourse on the role of China in international development, so for an NGO such as the CFPA to take the lead marks a notable shift. Officials from the Chinese government remained a significant presence at the event, with representatives from a number of ministries – including Civil Affairs, Commerce, Foreign Affairs, and the State Council – all speaking at the event. Also significant was the inclusion of several Chinese state-owned enterprises among the participants. That they all participated in the event is both indicative of the CFPA’s influence, and the importance of the topic being discussed.

Secondly, Yimei found the forum especially meaningful because “the CFPA was able to bring the practitioners to the forum to present their cases – including CANGO, and the China Youth Development Foundation, whose Project Hope is funding the construction of schools throughout Africa.” Oxfam Hong Kong, Mercy Corps, Heifer International, and the United Nations Development Programme were among the international attendees, demonstrating that the spectrum of interested parties engaged in developing China’s philanthropy abroad is diverse and increasingly a healthy balance between state and non-state, but also Chinese and international, actors. On the successes of the forum, Yimei concluded that, while “there have been some events in the past – such as roundtable events – this one had the largest participant pool and was the most influential.” 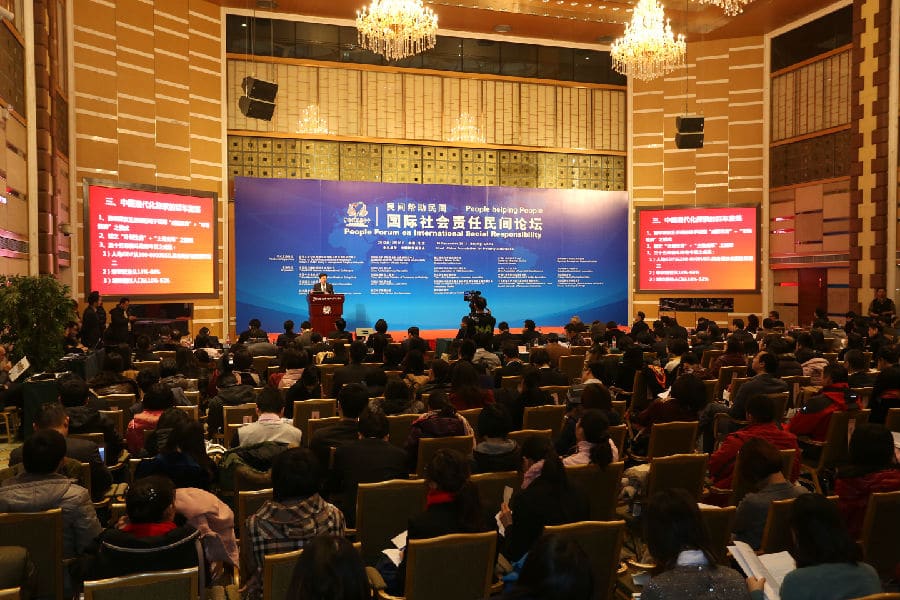 Over 300 influential figures attended the event.

Even with these successes, Yimei noted that there were several topics that did not receive enough emphasis or clarification in the Forum. Firstly, there was the matter of semantics in translation. The phrases “the internationalization of Chinese NGOs” (中国NGO的国际化) and “Chinese NGOs going abroad” (中国NGO 走上国际) were at times used interchangeably during the forum, but as Yimei and others noted, they do not have the same meaning. Indeed, these two expressions have different connotations and speak to different aspects of the development and maturity of Chinese NGOs as they enter the world stage. Professor Deng Guosheng of Tsinghua University, one of the key academic speakers at the event, had meant to address this subject but was prevented by time constraints. Fortunately, Deng’s analysis of the subject is available in his new book, which was one of the primary outputs of the CFPA-funded research project.

Yimei also felt that another shortcoming of the event was its preoccupation with government concerns: “The forum was focused on how the government can engage NGOs in international development, but there was very little discussion on how Chinese NGOs’ own development goals are in line with global development goals. NGOs have their own agendas and goals, many of them in line with the UN’s Millennium Development goals, but these weren’t really discussed. That could easily be the subject of a second conference.” In addition to the views of Chinese NGOs not being properly represented, the topics were rarely, if at all, discussed from the perspective of the communities that all parties were aiming to help. This gap in perspective highlights the importance of one of the Forum’s goals, the need for more and on-going dialogue not only between public and private actors, as well as foundations and NGOs, but also between the entire philanthropic sector and the communities receiving its support. Despite these shortcomings, the event still represents a significant milestone in advancing the discussion of China’s policy towards international aid, and foreign affairs.

Look out for two articles by Huang Haoming (a speaker at the conference) on the role of Chinese NGOs overseas in the forthcoming Winter 2013 edition of China Development Brief.

Assistant Director of CDB (English) Tom Bannister and CDB intern Luke Winship report on an influential forum on the role of China in overseas aid.