Amending the Charity Law: How to define “charity” and “public welfare?”

In October 2020, the Standing Committee of the National People’s Congress conducted an inspection for the Charity Law enforcement for the first time. The report of the inspection suggested the Charity Law passed in 2016 shall be revised in due course. Since then, the amendment of the Charity Law has been under the spotlight in both the nonprofit sector and the legal industry.

Lv Xin, Professor of the School of Law and Dean and Director of the Research Centre for Welfare and the Rule of Law (Charity Law Research Centre) at Zhejiang University of Technology said the primary focus for amending the Charity Law should be on how to define “charity”; the Charity Law was designed for governing charities, charitable programmes and practices. “Therefore, what is ‘charity,’ in particular how is ‘charity’ defined in the law is a question of the most significance for us to consider,” said Lv. 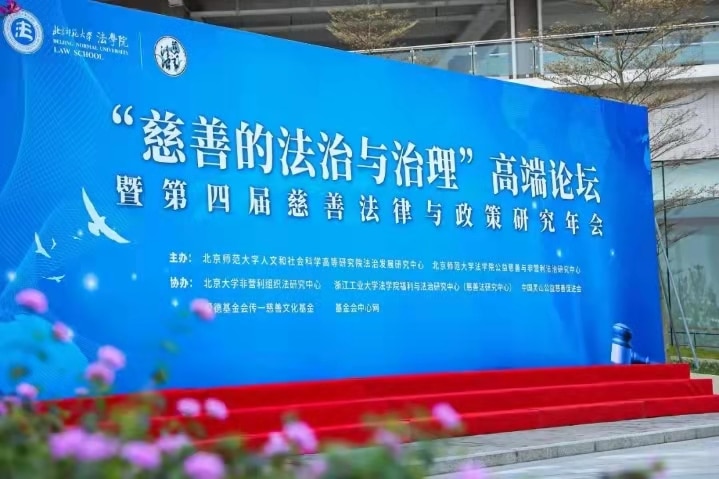 One evident issue is, in the past four years since the Charity Law was passed, disputes have arisen when differences can be noticed between the public understanding of “charity” and the definition of “charity” in the law. To address these questions, experts and scholars from the legal industry and the charity sector joined the 4th Annual Conference of the Charity Law and Policy Research, focusing on “the Rule of Law and Governance of Charity.”

Article Three of the Charity Law lists six types of charitable activities: (1) poverty alleviation and relief; (2) assistance and special care for the elderly, orphans, people suffering from diseases and people with disabilities; (3) relief for natural disasters, accidents and damages caused by public health emergencies; (4) promotion of the development of education, science, culture, health and sports; (5) prevention and control of pollution and other public hazards, and protection of environment and ecosystem; (6) other activities in accordance with this law.

A closer analysis of the first five types of charitable activities above shows distinction in each category. But the boundaries of these five types of activities overlap and can sometimes be blurred. For example, the target groups of poverty alleviation programmes include the elderly, orphans, people with disabilities and families with people suffering from severe diseases. In the work plan of poverty alleviation, it also mentions that alleviation should also concentrate on poverty caused by ecosystem damage and poor education facilities. The evaluation of poverty alleviation programmes also includes assessing organisations’ investment in post-disaster reconstruction, improved education and medical care.

Moreover, the sixth type of charitable activities in the Charity Law claims that apart from the previously mentioned five types of activities, other charitable activities in accordance with the law are also counted as “charitable activities.” However, what exactly do they include? Are animal protection activities part of the realm? Do foundations financially supporting small- and medium-sized companies belong to this “other type?” Meanwhile, if the law is not clear, relevant institutions such as the department of civil affairs and the department of finance and taxation will have difficulties determining the nature of organisations’ programmes and granting tax benefits.

The Charity Law sets out six different type of charitable activities. It also stressed in Article Three that “charitable activities in this law refer to the following public welfare activities voluntarily carried out by natural persons, legal persons, and other organisations by donating property, providing services and so on.” This stipulation means that “charity” can also be understood through the definition “public welfare.” Yet, the current problem is, the uniform definition of “public welfare” is nonexistent.

According to Article Three of the Public Welfare Donation Law of the People’s Republic of China, public welfare undertaking include (1) activities to assist social groups and individuals in difficulties such as disaster relief, poverty relief, and assistance to the disabled; (2) education, science, culture, health and sports; (3) environmental protection and construction of public facilities; (4) other social public and welfare undertakings that promote social development and progress. But this definition is inconsistent with what is written in the Charity Law on charitable activities.

Because of this inconsistency, the Announcement on Matters Concerning the Pre-tax Deduction of Public Welfare Donations issued by the Ministry of Finance, the State Administration of Taxation, and the Ministry of Civil Affairs stipulate that the public welfare undertakings referred to in this announcement shall comply with either Article Three of the Public Welfare Donations Law of the People’s Republic of China, or Article Three of the Charity Law of the People’s Republic of China.

However, the emerging virtual fundraising campaigns conducted by individuals and charitable organisations have caused a dilemma in the charity sector. Debates raise over issues such as, if an individual asking for financial help on the internet, does this belong to the realm of public welfare? Does this action need to be guided and regulated by the department of civil affairs? If a charitable organisation raises funds through the internet for people suffering from severe illness, can this action be considered to be done for the purpose of public welfare? If “public welfare” cannot be given a clear definition, when other new phenomena appear, dilemmas may follow.

Professor Lv holds that reflections on the definition of “charity” can be made from three perspectives: whether the classification of charitable purposes is reasonable, whether the principle of public welfare has been set up, and whether rules of prohibition on certain actions have been stipulated. In the meanwhile, if it is difficult to define what charity and public welfare are from the positive side, then one needs to contemplate if they can be explained by clarifying which activities should not be included in the legal definitions of charity and public welfare.

The Existing Problems in the Implementation of the Charity Law and Suggestions for Law Amendment submitted to the Social Construction Committee of the Standing Committee of the National People’s Congress mentions the Charity Law defines“charity” and charitable organisations on the basis of if organisations’ activities are in the purpose of charity, while other documents all emphasise the characteristics of “charity” and charitable organisations as involving “public welfare activities” and “targeting the general public.” The Social Construction Committee then advises that the amendment of the Charity Law has to make clear distinction between what “charity” refers to in daily conversations and in the law. At the legal level, it is necessary to check the scope of charitable activities and goals and make sure they benefit public interests. In principle, except for special charitable activities, the beneficiaries of charitable activities must be the general public.

PrevPreviousHow are foreign NGOs getting on in China after four years of reform?
NextChina Social Organisation Network published new data of social organisations in ChinaNext