Wang Zhenyao: the philanthropic economy and the mission of China’s philanthropy 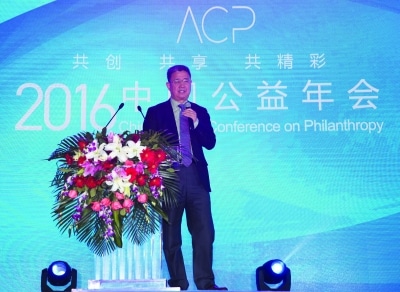 At the conference, Wang delivered a speech on the philanthropic economy and the mission of China’s philanthropy. He thinks that Chinese society has entered an era of high productivity, with a fully developed financial industry. By combining philanthropy with social development, China needs to expand social innovation and form a new pattern to promote the development of philanthropy in accordance with the Charity Law. Below is a translated excerpt of Wang’s speech.

Today I want to share an idea with all of you: what is the mission of China’s philanthropy in the era of the philanthropic economy?

To date, GDP per capita in the world has exceeded $10,000. At the current stage, productivity is highly developed; the financial industry is on a steady growth path; and the information revolution is continually accelerating. Human civilization is at a critical juncture for profound changes. Three characteristics have emerged amidst these changes:

1. Wealth overflows. As soon as a market demand emerges, a spectacular array of products will be produced.

2. The economy undergoes rapid structural transformation. With the retreat of the primary sector and a steady decline of the secondary sector, the tertiary industry, which mainly consists of social services, has taken up more than half of the whole economy and it is well on the way to reach a share of 70%.

When it comes to the development of China’s philanthropy at the current stage, I think the main challenge is how to promote the integration of philanthropy into the social and economic development.

Following the industrial revolution, a slew of problems such as the overflown of wealth, environmental pollution and corruption started to emerge. In addition to the social revolution promoted by governments and activists, philanthropists such as Carnegie, Rockefeller, and Ford also contributed to building symbols of modern civility including kindergartens, universities, hospitals, libraries and Wall Street.

Today we are facing yet another shift in civilization. We should promote the joint force of individual philanthropists and charity organizations to open up new frontiers for great social innovation.

This is no ordinary challenge as many obstacles are standing in our way. First, public ethics and ideology is lagging behind. Second, the shift from administration to governance is not happening fast enough. Third, the force of social innovation is still weak. We should not blame society for its lack of faith in the public welfare and philanthropic field. We need to change ourselves.

We need to establish a framework with Chinese characteristics in philanthropy, and promote the development of philanthropy guided by the Charity Law.

First of all, we should extensively praise those deserving. We have many philanthropists who made great contributions to the philanthropic industry and we should increase publicity for these figures. Second, we should implement a series of favorable policies, like the ones provided by the Charity Law. Third, we should promote the shift from simple administration to actual governance. Lastly, we must make changes in ourselves: improve our knowledge of philanthropy to keep pace with the Charity Law and the shifts in human society.

We need adopt the Chinese entrepreneurial spirit in China’s philanthropic industry and strive to make a contribution to the world philanthropy that is rooted in our own logic and with our own characteristics.