The law of a nation exists to protect the general rights and safety of its citizens, and lawyers are hired to advise and represent individuals in legal matters (American Bar Association, 2019[1]). But it is difficult for a country’s laws to protect all of the people, all of the time –– and lawyers themselves are not necessarily able to defend all social groups.

Although the legal profession has become more representative of the communities it serves over time, marginalized groups still lack adequate representation in the profession, meaning that they often struggle to access representation from people who truly understand their backgrounds and circumstances. The deaf community is one of those groups.

In the United States, for example, there are just 250 deaf or hard of hearing people practising law, according to an August 2016 estimate (Washington Post, 2016[2]). In China, until very recently, there were none. But in 2021, Tan Ting, from Sichuan Province, passed the national judicial examination and became the first deaf lawyer in the country, with the news quickly going viral on social media. Her story has helped to draw attention to the limited access to legal services deaf people currently enjoy.

In May, CDB invited her to share her story and elaborate on what being the country’s “first deaf lawyer” means to her and the wider deaf community. 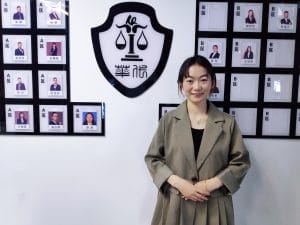 Like many who lose their hearing, Tan Ting was not born deaf. “I was just like everyone else before. I could hear people speaking,” she said, referring to the years prior to losing her hearing aged eight following a medical accident. Living in a mountain village in Southwestern China, Tan could not access special-needs education locally and quickly had to quit normal schooling, despite not having properly mastered standard Mandarin. “I still remember a sign telling us to speak Mandarin hanging in the village school.”

She stayed at home for five years until her parents were told that in Xichang, a city situated five hours’ drive from the family home, there was a primary school that accepted deaf children. There, for the first time, she was taught how to use sign language. While learning the language, Tan also tried to practise speaking as much as she could. Unable to hear how others pronounced words, she spoke according to the sound of every vowel and consonant in the pinyin system that she remembered from the school in her village. While Tan regularly practised speaking, talking and reading, it wasn’t until voice transcription apps became available that she was able to check her pronunciation.

Tan Ting has always been determined to live as close to an ordinary life as possible, despite the inevitable difficulties. She attended school, learned to dance, participated in dancing competitions, took the gaokao (China’s National College Entrance Exams) and was accepted into Chongqing Normal University. “Can deaf people go to university?” was a question asked by some of the teachers at the ordinary high school next to the “special school” that Tan attended. “We just can’t hear,” she would reply, “apart from that, we’re just like everybody else.”

First steps on a hard road

Tan Ting graduated in 2017 and quickly spotted a job advert from a local law firm that wanted to hire deaf staff to work as paralegals. She had read news reports about a lawyer at the firm named Tang Shuai, who used sign language to serve and represent the local deaf community. “I was very touched by what he was doing, so I was keen to get an interview,” said Tan. She was hired and was soon working with Tang.

Tang was the only hearing lawyer working at the firm and possibly in the whole country who could use sign language, allowing him to easily and accurately communicate with deaf clients. He was well-known among the local deaf community and each day deaf clients would visit, asking for legal aid. A lot more would also send him text messages and Tang was overwhelmed by his workload. “He needs help, that is why he wants to hire someone from the community,” thought Tan.

Yet as time passed, she realised that the deaf staff at the firm meant something more than that. “He wanted us, as deaf people, to get involved in the legal profession not only to help deaf people, but also to help close the gap between the demand for legal services from the deaf community cross the country and the lawyers who could actually provide them,” Tan reflected. 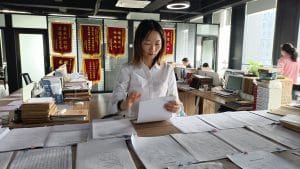 This realisation meant that joining the firm as a paralegal was only the first step on a challenging journey. The first part of Tan’s job was to help hearing lawyers and deaf clients communicate with each other. But this soon exposed a problem: the sign language Tang Shuai used to communicate with deaf clients was not the standard Chinese (Mandarin) Sign Language (CSL) that Tan had learnt at school. Instead, Tang used a Natural Sign Language (NSL). The two are not completely in conflict, yet each has features distinct from the other. CSL is consistent with the grammar of spoken Mandarin, while NSL is more than a spoken language. Users of NSL use their hand as well as facial expressions and their body language to express themselves. For Tan, this meant learning the “new language” from scratch so that she could communicate with her new clients.

Communicating using messaging apps could also be problematic. Not all of the firm’s clients knew Chinese characters or could write clearly. Messages would sometimes be a jumble of words and phrases, with several rounds of messaging required to piece together the required evidence and information.

When clients visited the office, they tended to be very emotional and agitated. They would repetitively describe their stories of being cheated, beaten, or mistreated, with Tan trying to follow their sign language as best she could –– experiences that have had a lasting impact on the Sichuan-born lawyer. “I wanted to do something for them,” she said.

But her difficulties did not stop there. The task of collecting evidence from deaf clients and conveying it to her hearing colleagues was equally time-consuming and at times, frustrating. Without the benefit of a legal background, she had to learn everything from scratch. At first, the translated information she provided to qualified lawyers was often likely to be incomplete, meaning she would need to go back to the client and continue to enquire. When sufficient information was gathered, communication would continue to be slow as Tan would need to rely on a voice transcription app to talk with her hearing colleagues. One of her colleagues later reflected that when Tan first joined the firm, she often had to repeat a sentence two or three times so that people could understand her –– something that used to regularly upset Tan. “I have all the information needed, but I cannot tell them straightaway… deafness creates such a gap between the deaf and the hearing.”

However, she never let anything get in her way and continued to move forward. The more she saw deaf clients coming and seeking legal help, the more she knew she was on the right path: serving the deaf community, a community that Tang Shuai said had seen its legal needs neglected.

Taking the next step

The longer Tan worked at the law firm, the stronger her enthusiasm for serving the deaf community became. However, as a paralegal without a legal background, she found it hard to deal with the most complicated cases –– the cases where deaf clients needed help the most. When these situations occurred, Tan had to ask for advice from qualified lawyers at the company, with replies occasionally taking days to come. Delays in providing advice could have serious consequences, with deaf clients sometimes becoming weary –– or even suicidal. Apart from providing comfort, there was little else Tan could do.

Her experience working as a paralegal helped her to realise that legal awareness among the deaf community is extremely poor, which sometimes led to deaf people breaking the law or falling victim to crime. Fraud and abuse are the most common types of crime that community members are involved in, either as victims or perpetrators. In one case, a deaf person told a group of deaf people that if they lent him money to invest in his company, he would offer them jobs and pay them dividends. Many fell victim to the scam and used their savings or borrowed money to invest. After the “businessman” ran off with their money, it was Tan and her colleagues that they came to for help. But the group did not even know they were victims of fraud and had not kept documents or records to use as evidence. They simply wanted their money back. 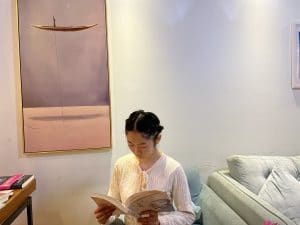 In another case, a deaf client asked the lawyers to help get her a divorce from her violent husband. After suffering years of abuse she had already hired a divorce lawyer and filed a case with the court. Yet according to the client, the court refused to grant the divorce. However, when Tan and her colleagues read the court’s decision, they were surprised to learn that it was the claimant who had withdrawn the case. It turned out that the woman knew nothing about the withdrawal and thought her divorce request had simply been rejected.

Why do deaf people become victims so easily? According to Tan, one of the main reasons is that they simply know too little about the law. “Some of them have no idea their actions have broken the law; others do not know how to protect their rights once they are violated.” Another reason, she said, is that the needs of the community are often not met. “They often need money because it is not easy for them to find work. They also have other desires, such as wanting intimate relationships. Some people may take advantage of that and pretend that they would like to have a relationship, but really they are after their money.”

Tan believes that education is the key and that outreach work is essential. “Deaf people need to learn about the law through sign language,” she said. To educate herself, she decided to train as a lawyer.