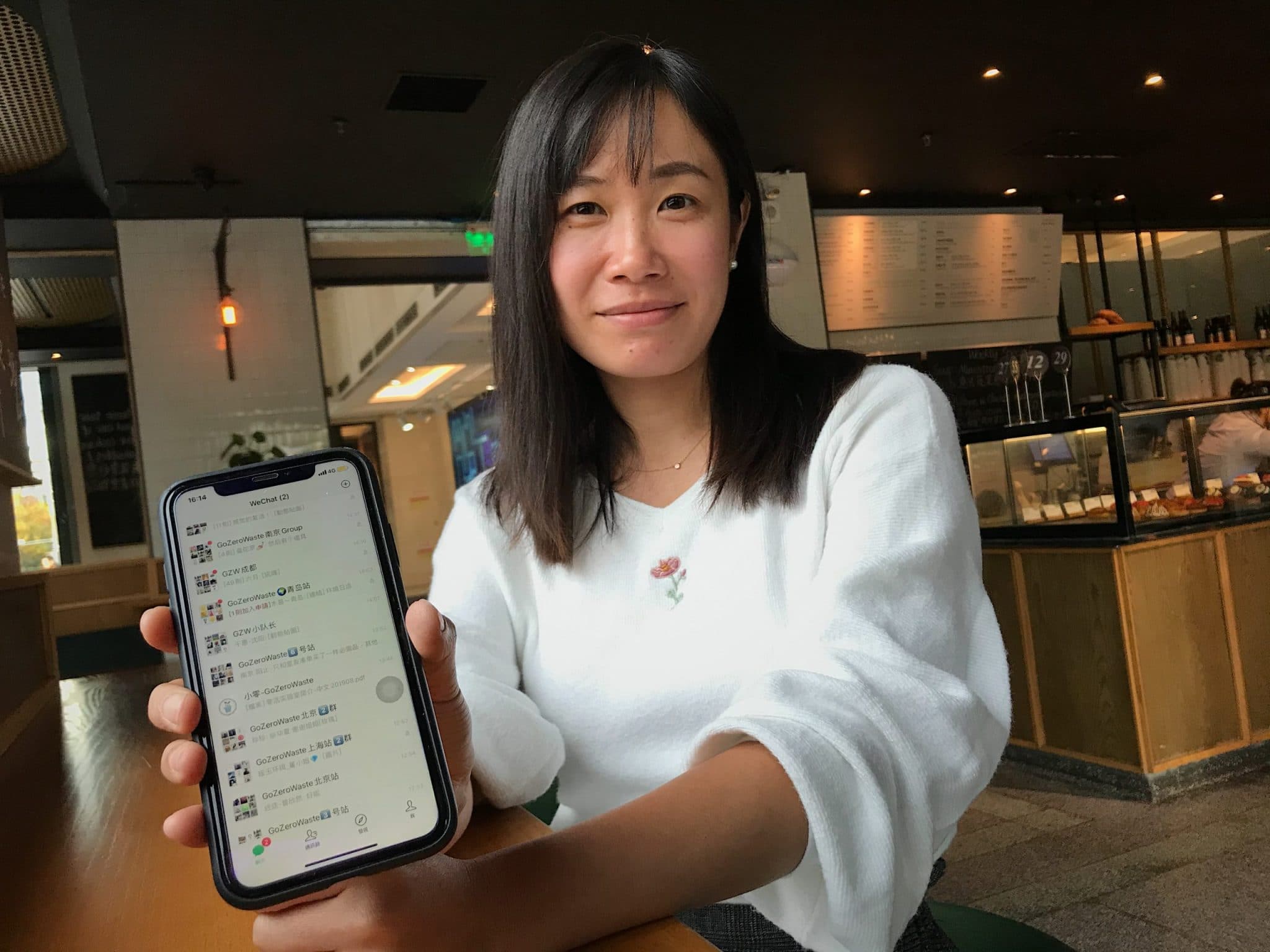 Elsa Tang, the Founder of GoZeroWaste, is building a wide Zero Waste network on WeChat to promote the Zero Waste movement in China. (Photo: CDB)

While recycling is currently one of the hottest topics in Beijing, there is a group of people who have set off on a journey that goes beyond recycling – Zero Waste.

According to Elsa Tang, the Founder of GoZeroWaste, a top-down approach can be the most effective way to bring systemic change to the society and attract public attention to environmental issues, however recycling is not the answer – it’s the last resort. “Instead of giving a false impression that we are doing good enough for the environment by recycling our waste, I prefer to educate people on how we can avoid producing waste in the first place.”

Zero Waste was originally a term used to describe manufacturing and municipal waste management practices. In 2008, Bea Johnson, a French-American woman living in California, decided to apply this concept to her life. Through trial and error, she successfully reduced the waste of her household of four people from a few kilograms a day to a small jar a year. Her story has been widely broadcast worldwide since then, and it has attracted countless people around the globe to go down the same road, including Elsa Tang.

In 2016, Tang read an article written by Lauren Singer, another zero waste advocate living in US, and was amazed by her lifestyle. “I used to think that being environmentally friendly is old-fashioned or disgraceful until I saw her video. Her life is so beautiful, it truly touched my heart.”

Instead of making people feel guilty about their behaviour, Tang shows them the bright side of living a Zero Waste life. “I started by living zero waste gracefully, in the hope that people will eventually come to believe that living a sustainable lifestyle won’t ruin their lives; on the contrary, their quality of life will be improved.”

While people are crazy about the Singles’ Day shopping festival, Tang avoids online shopping. Whenever she shops, she looks for package-free options and takes them home with reusable containers or cloth bags. She also follows a vegan diet to avoid the exploitation of animals and has rarely bought new clothing in the past few years.

“Life is an experiment in living; the focus of a Zero Waste lifestyle is not looking at the waste we reduced, it’s about gaining a new perspective on our lives.”

As the second largest polluter in the world, China has been in the spotlight on environmental issues in the past decades. Several important policies have been taken to reverse the damage being done, including the ban on plastic waste imports in the last year, and the strict waste-segregation rules issued in Shanghai this year.

“We are trying to catch up with the developed countries within such a short period, and people are facing drastic and overwhelming changes every day. Especially the elderly, they have gone through many hardships throughout their lives and are now being influenced by consumerism, so it’s difficult for them to make a change. From my point of view, the new generation is more open to new concepts and is now leading the change.”

Riding the social media wave, the Zero Waste community has expanded rapidly in the past few years and the trend has inspired the opening of countless zero waste-related businesses, including GoZeroWaste.

Founded by Tang in 2016, GoZeroWaste is a company based in Beijing, educating people about Zero Waste living through a wide social media network on WeChat. While managing 28 WeChat groups for netizens in cities including Beijing, Shanghai, Nanjing, Guangzhou, Wuhan, Chengdu and elsewhere, Tang also runs the official WeChat account of GoZeroWaste with more than 27,000 followers and provides free practical tips on waste reduction and sometimes free events for like-minded people.

Tang believes that people are aware of the environment issues but the question is: what can we do? “That’s what we are working on, we provide solutions.”

One of the notable events she organises is a swap party that happens once a month in Beijing. “People were skeptical about using second-hand items in the beginning, but now swapping unwanted clothing and household items has become a new culture in our community.” With the help of 39 volunteers, GoZeroWaste has successfully organised over 70 swap parties all over China in the last two years.

Besides, GoZeroWaste also helps companies to move towards Zero Waste through Corporate Social Responsibility programs. Supported by a foundation, a Zero Waste lesson plan was developed by GoZeroWaste and is now being taught in 20 primary schools in Beijing and Hebei.

“Many people find the ‘zero’ in Zero Waste intimidating, so ‘zero’ is never our focus. There’s no one-size-fits-all answer, our focus is to provide practical options and then it’s your decision how far you want to go.” 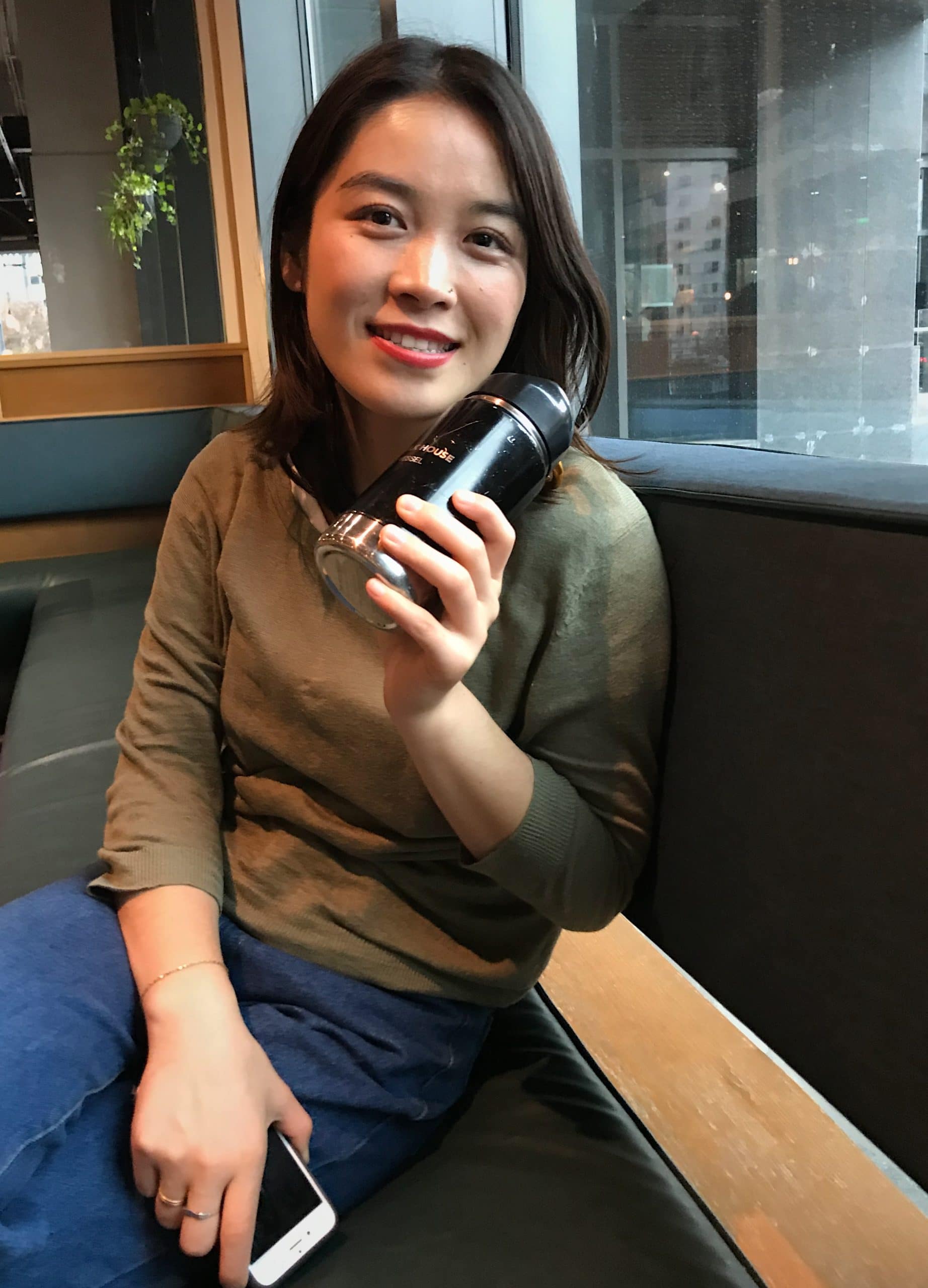 Carrie Yu, the Founder of THE BULK HOUSE, says both individual and political action are needed to tackle environmental problems. (Photo: CDB)

Although Zero Waste is still a concept that many people have never heard of, it is already becoming trendy on the Chinese internet.

In November 2018, a video produced by online media channel “Yitiao” went viral on social media. Within a short period of time, it hit 37 million views across the internet. The video was about a young couple living Zero Waste in Bejing and how they managed to fit six months-worth of trash into a small glass jar.

The opening of the store marked a milestone for the zero waste community in China, but while its future seemed bright, the Bulk House closed down unexpectedly in early 2019, just a year after its launch. It made people wonder: are the Chinese not receptive enough to the idea of Zero Waste?

“No, the shop closed down because the response was overwhelming, people came from all over China to THE BULK HOUSE to take pictures of our store, our products, and us.” Carrie Yu bursts out laughing. “We spent too much time talking to customers and ended up exhausted. We were stuck in the middle, whereby the store was doing quite well, but not quite well enough to hire new team members to take over from us.”

After closing down the physical store, Carrie Yu is continuing her Zero Waste mission through different online shopping platforms. Despite an initial drop in sales, Carrie Yu has no regrets regarding this decision. She says she is healthier, less stressed and has more time to work on the ‘bigger plan’.

“When I first started my Zero Waste journey in 2016, I realised that it was very difficult to get the information I needed to adopt this lifestyle. So I always had the plan to build a platform where we can put all the environmental information and services together.”

Despite all the complications, Carrie Yu is optimistic about the future of the Zero Waste community in China: she believes the key element of taking this movement to the next level is to make Zero Waste relevant to our lives.

“People tend to think that the complexity of the environmental problem is too large for them to worry about. It shouldn’t be thought about in that way, since every single choice we make each day affects us directly.” She explains: “imagine that the Earth is a big water tank. We get to enjoy clean drinking water if we all only fill the tank with clean water; but if just 100 or even 10 people fill the tank with dirty water, we all suffer. A small group of people living in a non-environmentally friendly way can pollute the entire tank and ruin the planet for themselves and the rest of us.”

Some critics argue that Zero Waste is idealistic, because in reality people are not ready to compromise their convenience, for example access to food delivery apps and online shopping, for the sake of the environment.

“I wasn’t doing this for the environment, I started living Zero Waste because I was confused and unhappy by the consumerist lifestyle. I realised that buying more stuff won’t make me happy. I had been living a life whereby marketing and big companies had tricked me into living the way they wanted me to live.”

Carrie Yu believes that human beings are in general quite selfish, thus instead of asking someone to save the environment, it’s now her focus to highlight how living Zero Waste could benefit us physically and financially.

Besides taking individual actions to save ourselves (and the environment) from destruction, Carrie Yu hopes the government could take bolder steps to reduce waste at the source, for example giving tax-exempt status to manufacturers that use less packaging or compostable packaging.

Aligning with fellow Zero Waste advocate Elsa Tang, Carrie Yu stresses that waste-sorting is a good start but not the answer. “The government is taking a detour but soon they will realise that there is actually a short cut to the real solution ahead of us.”

Recycling is hot topic in Beijing right now, but a group of people has departed on a journey that goes beyond recycling – Zero Waste. CDB interviewed two Zero Waste advocates to share their views on the new waste-sorting rules in China and the challenges that their community is facing.