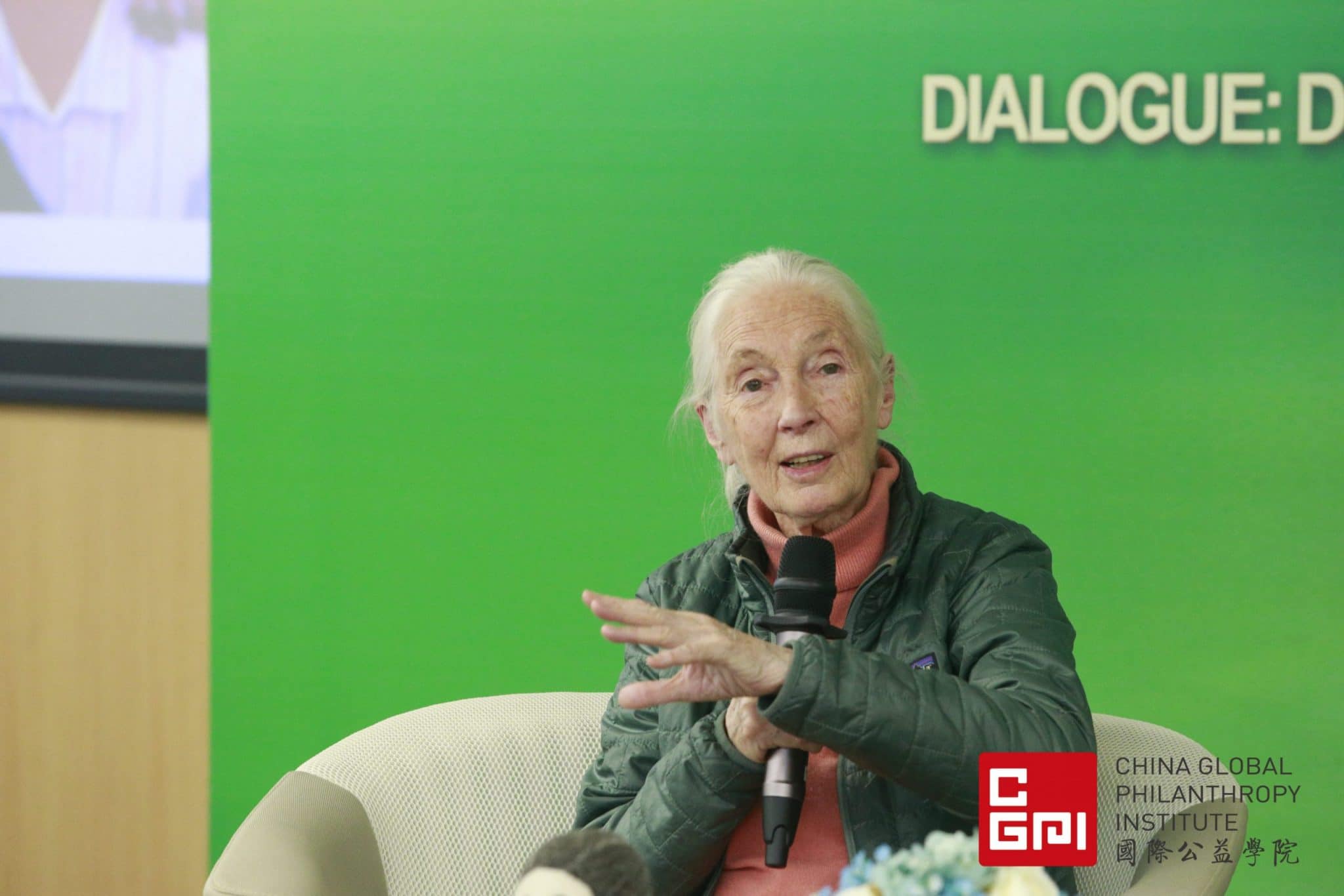 85-year-old Jane Goodall has been recognized as a living legend around the world. The English primatologist first set foot in Tanzania at the age of 26 and then spent decades studying chimpanzees, and finally redefined the relationship between human and animals through her revolutionary fieldwork.

To better protect what she truly loves – animals and nature – Jane Goodall shifted from science to conservationism and activism after attending a primatology conference in 1986, where she noticed that all the presenters spoke about deforestation going on at their study sites around the world. She decided to join forces with others to wake people up, and embarked on a journey that requires her to travel 360 days a year. The message she brings to the world after fighting for animals and nature for 60 years? There is still hope.

Last month Jane Goodall travelled to China, and her short trip was packed with a series of public events in different cities. This wasn’t the first time Jane Goodall visited China. Greg MacIsaac, a friend of hers who had helped to start off Roots & Shoots in Dar es Salaam in 1991, invited Jane to visit him after he left Tanzania in order to help start a new international school in China – the Western Academy of Beijing (WAB). “I said okay, if you get Roots & Shoots into a couple of Chinese schools, I will come! He did and I came to China in 1998.”

During the last trip, in a dialogue co-organized by the China Global Philanthropy Institute and Roots & Shoots Beijing, Jane shared with the audience that when she first came to China in 1998, people had little understanding of the environment and environmental protection was not popular. “It has changed so much and it has changed in a short time. Of course China could do better, every country could do better, but there has been a major change in attitudes.”

Environmental education for the youth has long been close to Jane Goodall’s heart. Roots & Shoots was originally a program of the Jane Goodall Institute, an organization that she founded in 1977 to support the research in Gombe and scale up the protection of chimpanzees in their habitat.

People can start their own Roots & Shoots groups in communities and schools, and that was how Roots & Shoots Beijing begun when Greg MacIsaac introduced this concept to China. Since Roots & Shoots began in 1991, the program has now developed into a global network with young people in 140 countries to foster the informed generation of conservation leaders our world urgently needs.

“It has been very rewarding to see Roots & Shoots spread through China, first in primary schools, and then in high schools, universities, now also in kindergartens. I think one of the reasons it has been very successful is because young people get the chance to choose what they feel is important to them. We listen to them and empower them to take action”

When Jane Goodall was asked for her opinion on what the Chinese youth can do to create a big impact of the sort Greta Thunberg is bringing to the world, she replied, “what Chinese youth can do and are doing is join Roots & Shoots.” She laughed and then added: “I am serious. One thing that is happening is that young people are changing the way their parents and grandparents think. A Chinese mother told me that what her daughter has learned in Roots & Shoots has changed the way she thinks about the environment. She’s now more careful about what she buys. Did it harm the environment? Or is it cruel to the animals? She and the other mothers have all changed the way they think because of Roots & Shoots.” 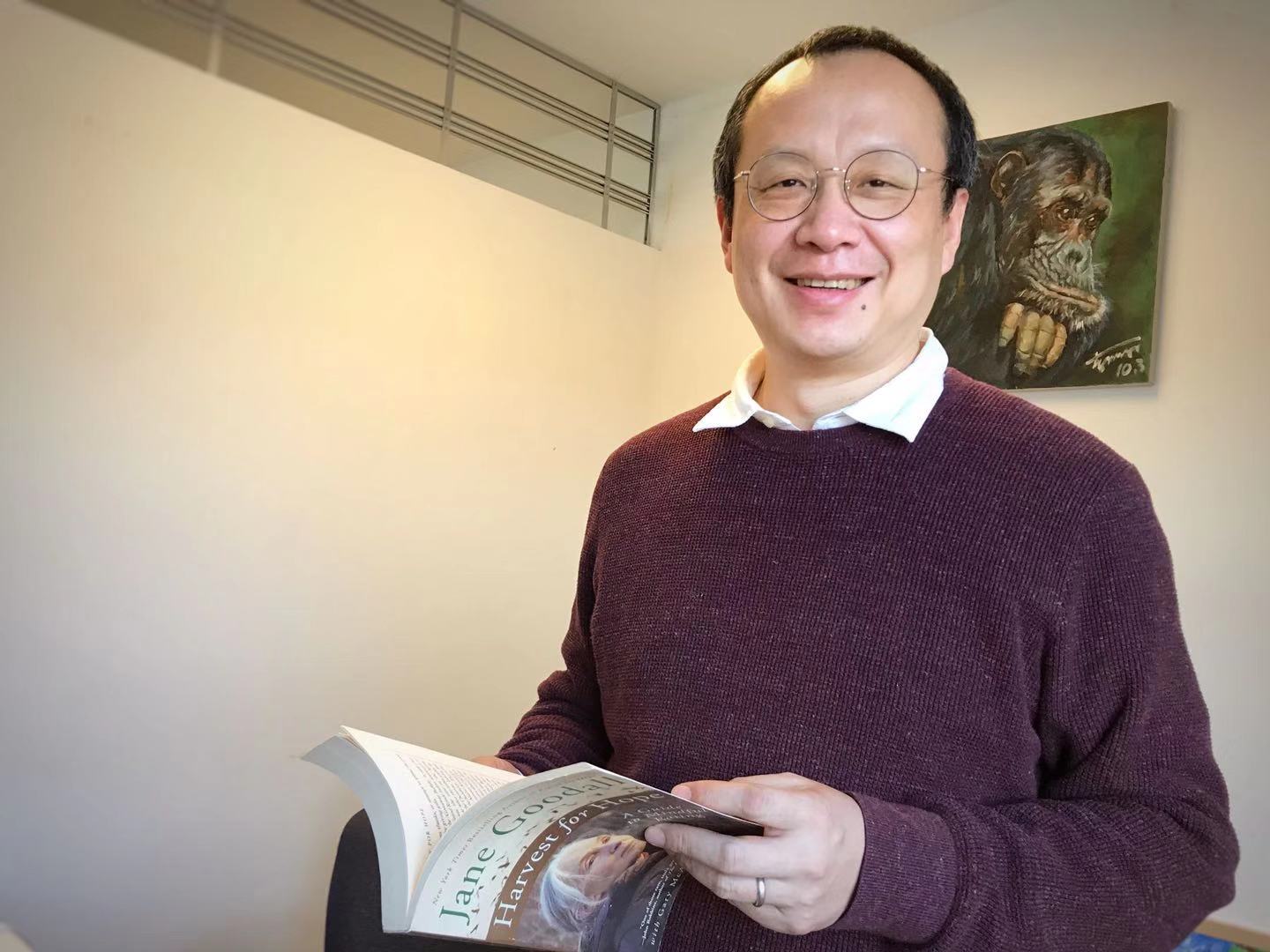 Zhang Xiaohai, the executive director of Roots & Shoots Beijing, says their role is to ‘help the youth save the environment’ (Photo: CDB)

Only if we understand, will we care, only if we care, will we help. Only if we help, shall all be saved – Jane Goodall

Jane Goodall’s visit definitely created a social media wave in China, however her trip is only for the short term, while the battle for the environment is not. After attending the dialogue, CDB visited Roots & Shoots Beijing’s office to take a closer look at how this organization of five carries on Jane Goodall’s mission in China, nurturing 20,000 young people each year to be the compassionate change-makers and leaders of the future.

Zhang Xiaohai, a former animal welfare expert and now the Executive Director of Roots & Shoots Beijing, greets me in the office with a picture of a chimpanzee hanging on the wall.

He first explains that Roots & Shoots Beijing is a Chinese NGO with no subsidiary relationship with either the Jane Goodall Institute or the other Roots & Shoots around the globe. “The first Roots & Shoots group in China started in the Western Academy of Beijing in 1994. The group carried out various activities in the international schools for many years before registering as a company under the name of the ‘Jane Goodall (Beijing) Environment Culture Exchange Centre’.”

“In 2017, we registered Roots & Shoots Beijing as a Chinese NGO” Zhang says, adding that although the Roots & Shoots around the globe are all independent from each of them, communication within the network is frequent and help is provided when needed.

According to Zhang, Roots & Shoots Beijing position themselves as a youth education organization instead of an environmental organization. Their role can be simply summed up as “helping the youth in saving the environment”.

“Environmental awareness was very low when Roots & Shoots was first introduced to China. Our work back then was mainly about providing environmental education lessons and introducing Chinese youth to the new environmental concept. But now it is different, such lessons are being taught in schools, and there is no point for us to repeat the work. So now our focus has shifted from teaching the courses, to providing the youth with the opportunities to participate in the environmental movement.”

Zhang says that teenagers nowadays are full of creative ideas, so providing them with a stage to contribute to conservation work could help train their skills, from campaign organizing to communication. Through youth empowerment programs, young people will then figure out their own way to conserve nature. 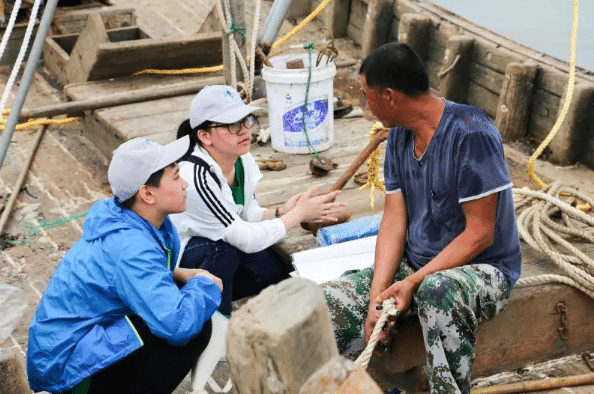 A successful Pangolin campaign which ended not long ago had groups from 88 universities respond. Over a period of two months, students visited 178 hospitals and called on 20,000 new mums to save the pangolins by refusing to use pangolin products, spreading the message that “baby pangolins need their mothers too” (in China there is a traditional belief that pangolin scales increase lactation for nursing mothers).

“We tried to make pangolin conservation relevant to our targeted audience. From this campaign, students helped create project impact and also learned how to design an environmental campaign with a unique marketing angle”, Zhang explained.

“For groups that are unable to organize such an exhibition, they can do smaller events in their schools, and we can help with printing the banners and providing the other materials required. Even if they only put up a poster in the school, that’s fine”, he says.

To further empower student groups to take their own initiatives, Small-Scale Funding for Creative Projects, a program that funds student projects at the scale of a few hundred to a few thousand yuan, was opened for applications.

According to Zhang, the selection of the grant winner is based on the creativity and uniqueness of the idea: “the topic can be repetitive, but the way they conduct the campaign must be unique because the more unique the idea is, the bigger the impact it could create.”

The Jane Goodall Institute is sometimes asked whether Jane Goodall is still alive. People love Jane Goodall and are concerned about her health. To Roots & Shoots groups worldwide this may not just be a sentimental question, but also critical to their survival.

“The global network is already discussing how we can prepare for Jane’s passing”, Zhang says. Jane Goodall is the face and spiritual leader of Roots & Shoots worldwide and her influence is critical to its development, thus some people are worried that her influence might get weaker after her passing and their work might be impacted.

“Jane’s visits to China have always greatly helped our fundraising as well as the implementation of our projects, although our work is quite independent when she is not around. I think what is more important is that she really inspires people and the Roots & Shoots team. We love her so much and don’t want to lose her. If this sad thing happens, it will be a big loss to us and to the world. However, I believe her legacy will be well passed on and keep inspiring the future generations.”

When asked about his vision for Roots & Shoots Beijing in the next 10 years, Zhang hesitates because, he explains, as an organization focusing on youth education, it’s hard to evaluate their impact. “How many people can a small organization like us influence? We have 5,000 new students joining us this year but the growth has a limit as we can only have one Roots & Shoots group in each school.”

So instead of measuring their impact based on numbers, he places his hopes on the future. “Our job is to discover and cultivate young environmental leaders. The kids who join our program today might become the social leaders of tomorrow. By then, I hope what they have learned from here will help them to make decisions that are more friendly towards our environment.”

What Zhang hopes is perfectly aligned with the message that Jane Goodall always bring to young people: “What you do makes a difference, and you have to decide what kind of difference you want to make.”

Jane Goodall has a plan for the next generation and the seeds of hope are now sprouting across the world through Roots & Shoots. With their continuous efforts in guiding the youth to make better decisions, a different world will soon be built.

Jane Goodall’s recent visit created a social media wave in China, however her trip is only for the short term, the battle for the environment is not. CDB visited Roots & Shoots Beijing to take a closer look at how this organization of five carries on Jane Goodall’s mission in China, nurturing 20,000 young people every year to be compassionate change-makers and leaders for our future.