Report: China has the potential to transform philanthropic sector

Philanthropic actors in China have the potential to transform the charity sector in the country while contributing to the Sustainable Development Goals (SDGs), according to a new report released on Monday.

The report titled “Philanthropy for the SDGs in China” was jointly released by the United Nations Development Program (UNDP) and China Foundation Center (CFC) during the ongoing Beijing Charity Week.

The report is the outcome of a joint program under the same name by the two organization launched in January 2017. It aims to mobilize Chinese philanthropic actors to achieve the SDGs by linking philanthropic actions to those goals and showing their contributions to the development agenda through a real-time knowledge sharing platform.

The report also highlights the imbalance in the sector. It suggests that poverty alleviation and education attract a larger chunk of philanthropic push compared to other development agendas such as gender equality; potable water and sanitation; affordable and clean energy; and climate change. These agendas need a more comprehensive and collective governance approach, according to the report.

The report reveals that about 60 percent of organizational philanthropic efforts in China are related to the goals of Quality Education, Poverty Eradication, Sustainable City and Community, Reduced Inequality and Good Health and Well Being.

Also, about 80 percent of all the Chinese philanthropic actors are working on the projects relating to SDGs. They are locating in the five charitably active clusters of Guangdong Province, Beijing, Shanghai, Zhejiang Province and Jiangsu Province, all the relatively wealthy regions in the country. 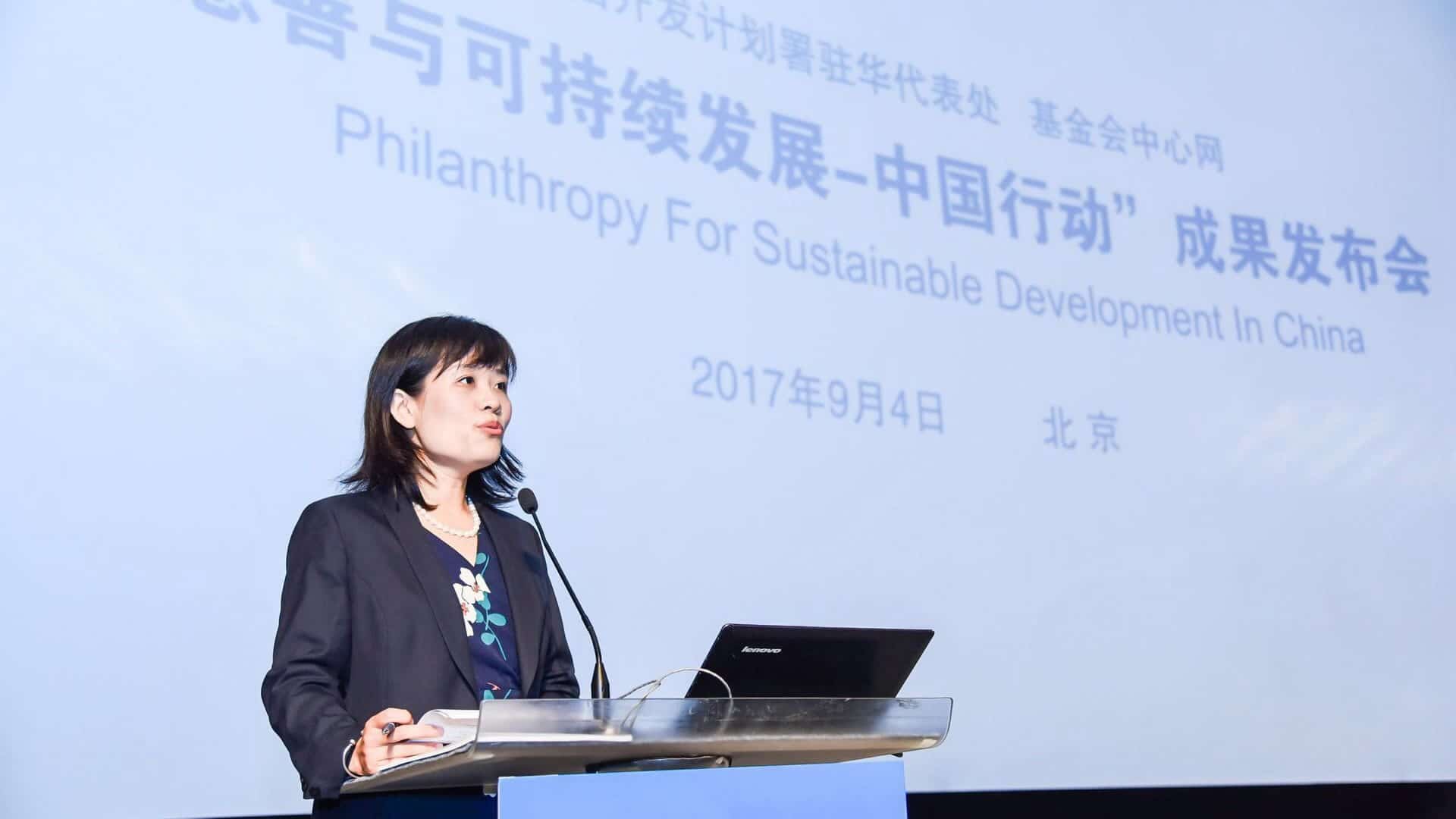 Gu Qing, who supervises UNDP’s Poverty, Equity and Governance (PEG) program in China, at the launch of the report titled “Philanthropy for the SDGs in China” in Beijing on September 4, 2017. /Photo provided by UNDP

“Development needs to be addressed through a multi-stakeholder approach. Not a single institution has the capability, funding, and ideas to achieve the SDGs individually” said Patrick Haverman, UNDP China Deputy Country Director at the report launch event.

Alongside the report, an SDG philanthropy platform was developed based on CFC’s core data from about 5,000 Chinese charitable foundations and adopted a method that combines manual classification and machine learning by using the 17 SDGs as the classification standard.

The platform presents the development of Chinese philanthropic sector and its contribution to SDGs comprehensively and provides support for decision-making regarding SDG-related projects by enabling foundations to search for relevant information and look for potential partners.

The platform also encourages increased transparency of the charitable foundations. According to CFC president Tao Ze, only 16 percent of the charitable organizations registered on the platform shared their information in 2010, while 90 percent publish their data online nowadays.

He said with the help of AI on the knowledge-sharing platform, China and US have emerged as the two players who keep track of the development in the charity sector by using big data.

Sustainable data-sharing and collaboration will help to normalize using the SDG agenda as a basis for communication amongst various stakeholders and will help encourage China’s philanthropic sector become more aligned with the SDG agenda, according to Wang Rui, national consultant of UNDP in China.

It is an objective tool to help address an information asymmetry and introduce the SDGs as a standardized international benchmark to evaluate and monitor the growth of the philanthropic sector both within China and abroad, said Gu Qing, assistant country director of UNDP in China.

“The joint effort of providing consistency and systemic understanding offers an opportunity to Chinese philanthropic actors to go global under the framework of SDGs along with One Belt, One Road initiatives that internationalize the country’s charitable effort,” said Elizabeth D. Knup, Ford Foundation’s country director in China.

“And it still needs time for Chinese public to understand and recognize the attempt of the domestic philanthropists to go global,” said Xu Yongguang, emeritus chairman of China Foundation Center.  “Chinese charitable practitioners also need to be more rational when faced with the practical issues abroad,” Xu added.

Hannah Ryder, CEO of Development Reimagined, agreed with Xu. “Like many other regions around the world, people often want money spent at home rather than abroad, even if it is in the poor countries. But it is possible,” she said.

“It’s good for them to commission studies, share experience, work with other charities and philanthropists who are already out there, to start off,” Ryder told CGTN. “Every journey starts with one step. And supporting poorer countries is the way forward.”