Philanthropy by Chinese entrepreneurs: the trends over the past decade

Since the Self-Strengthening Movement of the late Qing Dynasty, entrepreneurs giving donations to philanthropic activities and programmes have become an important source of funding for the charity sector. Early entrepreneurs such as Zhang Qian and Liu Hongsheng, who did great business in the textile and cement manufacturing industries, donated millions to help develop educational institutions, social welfare and the advancement of the arts and scientific subjects. Nowadays, as society and the business world have changed drastically, how has the behaviour of entrepreneur philanthropists changed accordingly? Based on the Hurun China Philanthropist List, and research and analysis conducted by the Hurun Research Institute, the Social Innovator magazine (社会创新家) published a comprehensive summary of the trends in entrepreneurs’ philanthropic behaviour between 2011 and 2020.

The chart below shows the total amount of money donated by the top 10 entrepreneurs in the Hurun China Philanthropist List between 2011 and 2020. As can be seen from the chart, between 2015 and 2017 there was an obvious increase in the total amount of money donated by entrepreneurs. Social Innovator magazine believes that the increase was related to the entrepreneur who gave the most on the list – Jack Ma. In both 2014 and 2015, Jack Ma was on top of the list and gave 14.5 billion RMB (2.204 billion USD) and 14.65 billion RMB (2.226 RMB) respectively, accounting for 80% of the total donations of the top ten entrepreneurs. In 2016, Ma Huateng became number one on the list, donating 13.95 billion RMB. 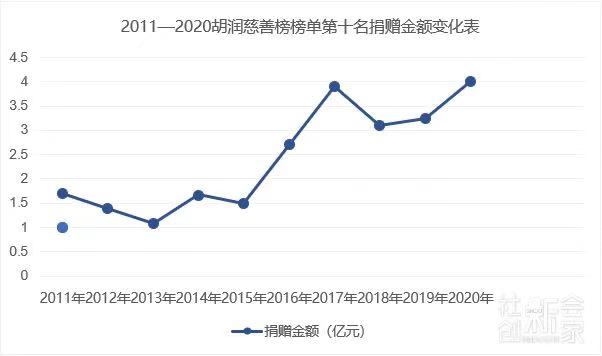 Since 2017, however, the total amount of donations by the top ten entrepreneurs has fallen significantly. There was a small increase in 2017, but since then the number has been steadily decreasing.

How much money would you need to donate to reach the top ten? According to the chart below, 2013 was the year when the tenth entrepreneur on the list gave the smallest amount of money: Yang Guoqiang, founder of Country Garden, a property development company based in Guangdong, and his daughter Yang Huiyan, donated a total of 109 million RMB.

The amount donated by the 10th entrepreneur in the Hurun China Philanthropy List, 2011-2020

Since 2013, the amount of money donated by the last entrepreneur on the list has been increasing, despite a small decrease in 2017. In 2020 Dang Yanbao, president of the Ningxia Baofeng Energy Group, Co., Ltd., and Huang Tao alongside his father Huang Rulun, founder of the Century Golden Resources Group, came joint in 9th place on the list by giving 400 million RMB each.

As Social Innovator gathered the names of the entrepreneurs on the Philanthropy List, they realised that quite a few entrepreneurs have made more than one appearance. For example the Huangs, Huang Rulun and his son Huang Tao, have been on the list every year either together or separately, and the total amount of money they donated stands at 4.27 billion RMB. In addition Xu Jiayin, Chairman of the Board of Directors of the Evergrande Group, appeared on the list every year apart from 2011 and 2015. This year Mr. Xu is at the top of the Philanthropy List. Other entrepreneurs, such as Wang Jianlin (seven times, donated 4.6 billion RMB in total), Chairman of Wanda Group, Lu Zhiqiang (six times, donated 3.789 billion RMB in total), Chairman of Oceanwide Holdings Group, and Yang Guoqiang and his daughter Yang Huiyan (five times, donated 2.739 billion in total) have continuously made appearances on the list.

Social Innovator also looked at the ages of the entrepreneurs on the list, and from the chart below it can be seen that their average age was between 55 and 60 years old. 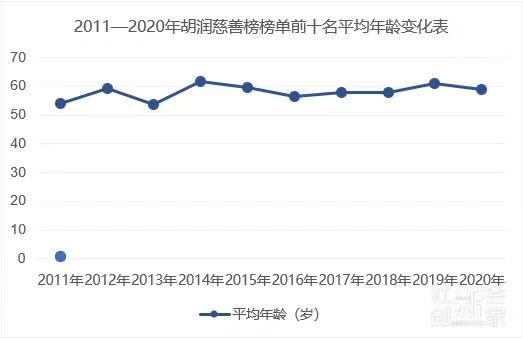 The average age of the top ten entrepreneurs on the Hurun China Philanthropy List, 2011-2020

Entrepreneurs from the IT industry are the black horse of the Hurun Philanthropy List. Although few in number, since 2014 IT magnates have appeared continuously, including Jack Ma, Ma Huateng (founder of Tencent), Chen Yidan (co-founder of Tencent) and Chen Tianqiao and his wife (founders of Shengda Games).

Poverty reduction is another area in which rich entrepreneurs choose to donate their money. For the past four years, at least half of the entrepreneurs in the top ten have donated to programmes aiming to alleviate poverty. Healthcare, culture, infrastructure building and environmental protection have also been strong areas of focus. Many entrepreneurs chose to first set up their own foundations, or establish foundations in the name of their businesses, and then donate through these foundations to the areas they aim to target.