CDB Forum 2020 focused on challenges, responses for overseas NGOs in China and Chinese NGOs operating their programmes overseas. While the morning sessions included international non-governmental organisations (INGOs) shared the value of their work in China, and local NGOs expressed their expections on INGOs continue to help them in the midst of a pandemic, the afternoon sessions were centred around experiencs and lessons from NGOs that originated from China but chose to organise part, or all of their programmes in a foreign country or several foreign countries and INGOs in China giving their advice on how Chinese NGOs increase their impacts overseas. 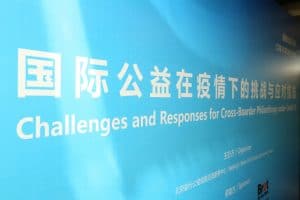 Two guest speakers, Farooq Tariq, General Secretary of the Pakistan Kissan Rabita Committee, and Hemantha Withanage, Executive Director at the Centre for Environmental Justice, sent their statements (in videos) on overseas programmes Chinese companies had finished as part of the Belt and Road Initiative in Pakistan and Sri Lanka respectively. Two roundtable discussions took place in the afternoon included not only new knowledge and perspectives on this topic, but also insightful dialogue between guest speakers. Between the roundtables, Kang Xiaoguang, President for China Institute for Philanthropy and Social Innovation at Remin University of China, expressed his concerns and suggestions related to the rising phenomenon of the increasing number of Chinese NGOs operating overseas.

Since the announcement of the Belt and Road Initiative in 2013, much investment has been made in countries in South Asia in the areas of infrastructure and energy. While money and resources from China have made positive changes in people’s lives and impacted local economies and politics, they have—without much acknowledgement—also caused harm to the environment, stressed both guest speakers in their videos. In their videos, both Tariq and Withanage shared their concerns over environmental deterioration and pleaded NGOs in China focusing on environmental protection to raise these concerns to both the government and the public. The Belt and Road Initiative aims to bring development and amity to the BRI countries,  and speakers emphasised development  of the economy, energy, infrastructure and service sector should not be achieved at the price of the environment and local communities’ welfare. 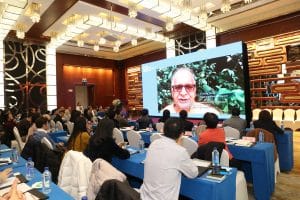 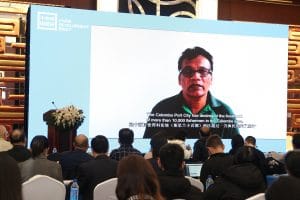 Tao Chuanjin, Professor in the School of Social Development and Public Administration, mediated the first roundtable discussion. Tao led the guest speakers to share their experiences and views on what challenges that Chinese NGOs working abroad have encountered and what their adaptive strategies are. Among the seven speakers, Li Haiying, an expert from China Council for International Cooperation on Environment and Development (CCICED), introduced a report she has been working on focusing on collaboration among Chinese NGOs working overseas, international NGOs and NGOs from the host countries, in the aim of facilitating the establishment of a more environmental-friendly Belt and Road Initiative. The report has a special focus on why and how non-governmental collaboration should be promoted along with the Belt and Road Initiative. Following Li, Wu Peng, Head of the International Department at China Foundation for Poverty Alleviation (CFPA), told the audience about the lessons they have learned and challenges faced from the work that CFPA has done overseas in the last decade. Wu pointed out that setting effective strategies, continue to develop organisation’s professionalism and applying best practices in domestic programmes to programmes overseas are key to help NGOs move beyond borders. In regards to challenges, Wu said the pandemic has indeed brought many difficulties for their programmes in regions such as Africa and Southeast Asia, and that barriers in communication, culture difference and languages have always been factors affecting Chinese NGOs’ work. Chinese NGOs have to continue their capacity building, Wu reiterated, in order to understand the international framework and reach a globally-acknowledged standard. 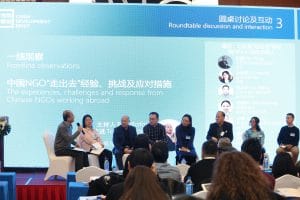 Kang Xiaoguang, President of China Institute for Philanthropy and Social Innovation at Remin University, gave a speech after the first roundtable discussion. Kang indicated that it is critical for NGOs to rethink the value of their work, programmes and services, and to identify and confirm the unique culture of the nonprofit sector in the wider society. Thus far, the impacts of Chinese NGOs are still little, both domestically and internationally. Kang stressed that NGOs should not be used as tools to achieve profits, and NGOs should not adopt commercial operating systems. The foundation of any charity work is the principle of human rights, and the core of NGOs is to serve human beings and defend people. 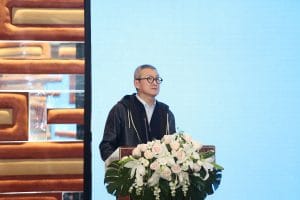 The theme of the second roundtable of the afternoon was how Chinese NGOs working abroad make sure they have growing local influence in host countries. Suggestions were given by representatives from international NGOs according to their experiences of operating in China, and objectives, diversity and localisation were three key words the guest speakers had repeatedly mentioned. All the guest speakers had acknowledged that in order to make programmes more impactful, Chinese NGOs should have clear objectives for each and every programme they operate in a foreign land. What they want to achieve and how these achievements can make a difference on people’s lives are foundational questions NGOs need to ask themselves. Emphasising “diversity,” the guest speakers had agreed that Chinese NGOs going overseas should focus on a wide range of topics instead of only a few ones, seek partnerships with different actors and try to find different sources of funding. Chinese NGOs have represented a different kind of voice from China; this would change the existing image of China and NGOs are also able to gain recognisation and respect internationally through their programmes. But more importantly, programmes have to consider the local needs as the primary drive for their programmes, and respect local culture, tradition and customs in their daily operation. 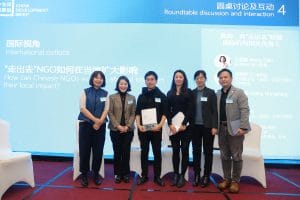 After the second roundtable, CDB had the opportunity to introduce our newly-launched “Chinese NGOs Going Out Map” to the audience. Having 61 programmes registered on our English and Chinese website, which were operated by 9 organisations in 29 countries in 33 different sectors, the map is programme-centred and able to fill the information gap in the current research on Chinese NGOs going overseas to launch their programmes. Facing still-existing issues with Chinese NGOs moving overseas, CDB also put forward responding plans to deal with them, including policy advocacy and public awareness-raising campaigns, and annual research report on a certain number of Chinese NGOs that operate abroad.

Peter Liu, Executive Director of Beijing E-Share Civil Society Information Center, concluded the forum with an appeal to face the pandemic and challenges following it with courage. He also stressed that the annual forum of CDB would continue to create a unique space for all kinds of NGOs in China to communicate, inspire and work together. 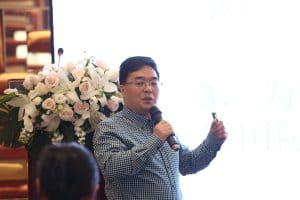 The recent two posts on CDB 2020 Forum are only summaries of this event. Details about each speech and roundtable discussion will be published in due course.