The philanthropy sector in the People’s Republic of China (PRC) has come a long way since the 1980s and 1990s, when it was dominated by government-backed foundations or government-organized NGOs (GONGOs). After the Regulations for Foundation Management were issued in 2004, the philanthropy sector saw the rapid growth of private foundations that are now beginning to rival their government counterparts in both numbers and visibility. Over the past few years, some important developments have taken place, stimulated by fundraising controversies in the wake of the 2008 Sichuan and 2010 Yushu earthquakes, and initiatives led by a small group of private foundations to strengthen philanthropy and civil society in China. What are the controversies and debates over fundraising and philanthropy that have emerged in recent years? What has been the government’s response to these debates? What steps have foundations been taking to strengthen trust and accountability in philanthropy? How is the independent, or grassroots, nonprofit or NGO sector being affected by these developments? Will the newly emerging private foundations evolve into supporters of grassroots NGOs and civil society in general?

This special issue, which represents the inaugural publication of China Development Brief (English), covers these important developments, the debates they have engendered in the philanthropy and civil society sector, and profiles some of the major figures and organizations involved. In the future, CDB (English) will continue to translate and publish other articles and special issues online and occasionally in print.

A word is in order about the origin of the articles and the translation/editorial process. All of these articles are translations of Chinese-language articles by China Development Brief (CDB) staff writers, and were published in previous issues of CDB.   They were selected by the editor of CDB (English) and translated and reviewed by CDB’s team of translators, edited and proofread.   Each article starts with an introduction that summarizes key points, and contains explanatory notes throughout for the reader.

We would like to thank CDB, the Ford Foundation, and our CDB (English) translators and interns for their support.   As a translation project of CDB, CDB (English) would not be possible without the support and hard work of CDB staff who invest long hours to report on the nonprofit sector in China.   We also appreciate the financial support of the Ford Foundation who believed in us from the very start. Finally, our translations and other resources would not be possible without the work of our volunteer translators, and interns.

You can download a PDF version of this special issue by going to the CDB (English) website, www.chinadevelopmentbrief.org. If you would like to order a hard copy, please email website@cdb.org.cn in English or Chinese.

While we are happy to provide a complimentary PDF copy of the special issue, we do need recover the cost of producing this issue, and encourage you to make a tax-deductible (for U.S. residents) donation to CDB. You can make a donation by going to Give2Asia at www.give2asia.org and typing in China Development Brief in the Search box.

What is the Nonprofit Sector in the PRC?

CDB writers tend to assume their Chinese readers (who come mainly from the nonprofit, academic and government sectors) have some understanding of the Chinese nonprofit sector. CDB (English) makes no such assumption and in this section, we explain some essential background information needed to make sense of these articles.

Perhaps the greatest challenge is to define what exactly constitutes the nonprofit sector in the PRC, and what term or terms are used to describe it.   Internationally, the nonprofit sector is also known as the voluntary sector, the charitable sector, the third sector and the civil society sector. It refers to organizations, groups, projects, networks that are voluntary, self-governing, not-for profit, and private in nature and that are established with a mission, whether it be to serve their members or to serve the underprivileged.

1. Social Organizations (SOs, shehui tuanti, 社会团体), which are similar to membership associations in the U.S.;

2. Civil Non-Enterprise Institutions (CNIs, minban feiqiye danwei, 民办非企业单位), which are similar to service providers such as schools for migrant children or the handicapped;

The 2004 “Regulations on Foundation Management” created a further distinction between “public fundraising foundations” (gongmu jijinhui, 公募基金会), which are allowed to raise funds publicly, and nonpublic fundraising foundations (feigongmu jijinhui, 非公募基金会), which are not allowed to raise funds publicly.   Throughout this issue, we use the term “Public Foundation” to refer to the former, and “Private Foundation” to refer to the latter. These terms are not ideal and can be misleading. Public Foundations are so-called because almost all of them are GONGOs, yet there are now a few independent nonprofits that have succeeded in registering as public foundations (e.g. the Amity Foundation and the One Foundation).   Most Private Foundations, in turn, are established by private individuals or entrepreneurs, yet some could be GONGOs.

The nonprofit sector in practice refers to a much larger universe of organizations that includes not only the above legally-registered social institutions, but also informal nonprofits and quasi-governmental organizations (see Figure 1). Informal nonprofits refers to the many independent nonprofits that are either registered as for-profit businesses, or unregistered. These nonprofits are businesses in name, but nonprofits in the operation of their organization. (Given that international definitions of nonprofits emphasize their not-for-profit, private, self-governing nature, the notion of GONGOs or for-profit nonprofits is a bit of an oxymoron. But again, this being China, most people tend not to make a fuss about these distinctions.) Finally, even quasi-governmental bodies, such as mass organizations (e.g. the Women’s Federation, Communist Youth League), and public institutions (which include the public universities and research institutes in China) have been known to refer to themselves as nonprofits or NGOs. 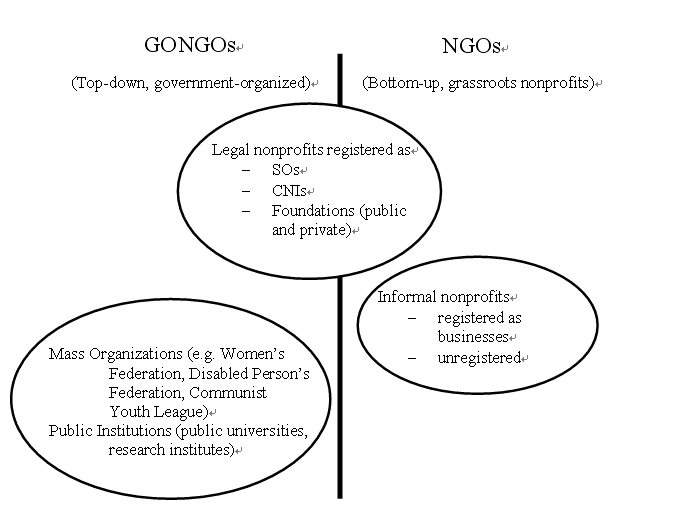 Figure 1 The Nonprofit, Philanthropic Sector in China (the size of the circles is meant to suggest the relative size of each group)

Terminology poses another challenge for the layperson.  The term “nonprofit”, NGO, and civil society organization, are not used much by the Chinese who prefer “popular organization” (minjian zuzhi, 民间组织), “social organization” (shehui zuzhi), and more recently, “public welfare organization” (gongyi zuzhi，公益组织). Independent nonprofits, however, do like to distinguish themselves from GONGOs by referring to themselves as “popular” (minjian, 民间) , “grassroots” (caogen, 草根), or “civil society” (gongmin shehui，公民社会). Because CDB is itself an independent NGO, it uses these terms liberally throughout its articles.

A Brief History of Nonprofits in the PRC

The 1995 World Women’s Conference in Beijing was another important event because many international women’s NGOs attended and it was at that conference that many Chinese first heard the term NGO. Afterwards, the term NGO began to be used more frequently, even though there were very few independent NGOs in the mid to late 1990s.

The Regulations for Social Organizations were revised and reissued in 1998, along with Provisional Regulations for the Registration and Management of Civil Non-Enterprise Institutions (CNIs). In the early 2000s, more independent nonprofits were able to register as CNIs, but many more were unable to register given the problem with finding a government sponsor. These nonprofits either registered as a business, or remained unregistered. In 2001, three years after the regulation for CNIs was issued, the number of CNIs rose to 82,000 nationwide, compared with 129,000 Social Organizations. By 2010, those numbers had risen to 198,000 and 246,000 respectively[1]. There are no official statistics for independent nonprofits registered as businesses or unregistered, but they have grown quickly during the 2000s, and some scholars estimate they number around 200,000[2].

From these statistics, it is clear that private foundations have spread like wildfire. Their emergence is one of the major stories in the Chinese nonprofit world over the last few years. Perhaps more importantly, a small group of foundations have begun to promote a new kind of philanthropy that seeks to move away from support for government charity projects toward sectors that have traditionally been neglected, such as support for independent nonprofits. It, thus, made a great deal of sense to focus our inaugural special issue on this newly emerging philanthropic sector and its impact on China’s civil society.

COMPARING CHINA AND THE U.S.: China’s nonprofit sector is still young. It may be growing quickly but is still small compared to the nonprofit sector in developed countries like the U.S.   Here are some statistics that provide some perspective:

Source: Articles in this special issue.

Key Findings: The Good, the Bad, and the Murky

Following is an attempt to summarize what the articles say about the main trends and issues. Those who want more details are encouraged to read the articles themselves. With apologies to Sergio Leone, we organize the major findings into positive trends (the good), negative trends (the bad), and trends that point in no particular direction (the murky).

•      There are a group of foundation leaders committed to increasing transparency, accountability and professionalism in the philanthropy sector, and encouraging foundations to support nonprofits. At the forefront are leaders from Narada Foundation, Vantone Foundation, YouChange Foundation, Tencent Foundation, and Bright China Foundation, among others.

•      There are a number of initiatives that have emerged in the last two years to promote the above goals: the China Private Foundation Forum which has held two sessions, one in July 2009 and another in October 2010; and the establishment of the China Foundation Center in July 2010.

•      The rapid rise of private foundations provides an alternative source of funding for NGOs. This is a positive trend in a climate in which international NGOs are reducing their funding commitments. Whether foundations actually fund these NGOs is another question.

•      Philanthropy in China is still dominated by GONGOs and public foundations with government ties. This sector is also plagued by bureaucratic norms of decision-making, and lack of transparency and accountability.

•      There are a number of vested interests in the current philanthropy system – GONGOs and public foundations that enjoy many privileges – that will make the philanthropy sector difficult to reform.

•      There are no major breakthroughs in the regulatory environment. Private foundations and NGOs still face major constraints in terms of fundraising, legal registration, capacity building, legitimacy. Most of the regulatory reforms have been minor and have made it somewhat easier for certain categories of nonprofits to register. Certain provinces and cities (e.g. Shenzhen, Yunnan, Beijing, Shanghai, Qingdao) are also experimenting with reforms to better regulate and promote the nonprofit sector.

•      The uncertain regulatory environment also pushes foundations to fund projects and organizations in less risky sectors such as education, poverty relief, and environmental protection, and to stay away from areas such as legal aid and advocacy. (The recent crackdown on legal rights and human rights activists has further reinforced this tendency.)

•      There is still a gap in philosophy, practice and communication between NGOs and the foundation world. NGOs cultivated close ties with international NGOs and are used to international practices and standards, but Chinese foundations have different ideas and approaches, and are new to grant-making. Private foundations are still trying to figure out their mission, their role, and their direction.

•      There are also differences among private foundations. Many foundations are strongly influenced by corporate values and culture and see philanthropy primarily as a way to promote public relations, and government relations.   Only a small minority of foundations are committed to social values and addressing social problems as their core mission.

•      There are debates over the direction in which NGOs and philanthropy should move. Should NGOs cooperate with the government and GONGOs, or seek the grassroots path relying more on international funding? Should foundations engage in grant-making, operate their own projects, or both? Should they do more to support NGOs not just providing project support, but also core support to cover administrative and personnel expenses?

•      Some foundations and NGOs are now thinking about internationalizing by contributing to international aid efforts, and addressing global issues such as climate change.

•      It is still early in the process and still unclear whether foundations are willing to become more transparent, accountable, and supportive of NGOs.

A. Recent Developments and Debates

B. People in the News

C.  Organizations in the News