Gender equality is about women and men, young and old: Zhang Jun (Part I)

Gender-related issues have rarely stayed out of the spotlight and they are addressed with varying characteristics in different countries. Globally, according to OCHA[1] and reports from the Guardian[2], the mindset towards gender-related issues has evolved from considering them as only a women’s issue with solutions coming from the leadership of men to viewing them as everyone’s issue with solutions demanding cooperation between women and men. Looking back at the history of gender equality development in China, progress can be evidently noticed despite gender-related issues still being dominantly regarded as only women’s issues and something that will dissolve once women and girls are given more resources. China Development Brief recently talked to Mr. Zhang Jun, director of Shaanxi Gender Development Solution (GDS), about existing gender-related issues facing China and his journey of promoting and contributing to gender equality as a man. This article summarises the first part of the interview CDB did with Zhang.

Zhang first encountered the concept of gender equality in the domain of children’s education. When he participated in a collaborative children’s education programme between China and the UK in Ningxia Hui Autonomous Region in 1999, he was surprised to realise there were gender specialists among all the foreign experts. But through this programme, he recognised much more young girls than boys dropped out of school from poor households in rural Ningxia.

This programme gave Zhang new insights into the equality of education opportunities. In 2000, Zhang joined Plan International (China), an international non-governmental organisation (INGO) operating in Shaanxi Province, to continue working on children’s education programmes. He realised that “gender equality” had become a norm in INGOs and had to be applied to all the programmes he supervised. “Beyond equal education opportunities for both boys and girls, one important lesson I learnt through these experiences is: the precondition of gender equality is respect. Whoever you are dealing with, either they are of the same sex or the opposite sex to you, you have to give them your respect.” In 2014, Zhang joined GDS, which used to be called Shaanxi Gender Development Training Centre. 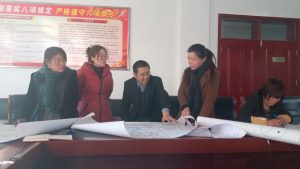 The Chinese women’s movement goes back to as early as the May Fourth Movement in 1919, more than a century ago. Gender equality had been promoted during the May Fourth Movement, although its most significant impact was mainly on urban elite women. Later in Yan’an, a city that served as one of the headquarters of the Communist Party of China (CPC), equality between men and women was also stressed through various approaches, such as CPC guidelines and artwork. Moving to 1949, the first law published in the newly established People’s Republic of China was the Marriage Law, in which gender equality was once again emphasised. Gender equality was later even enshrined as a basic state policy.

However, one commonality of these events, Zhang pointed out, is limited women’s involvement in the leadership. If gender equality focuses on uplifting women’s social status and ensuring they enjoy the same rights as their male counterparts, he argues both men and women need to participate and contribute to achieve gender equality. He said that in the contemporary moment, women have realised the importance of leadership in events affecting them and their rights. “Women should be leaders in their own movements rather than being led by men,” said Zhang. “And men should recognise women’s leadership in women’s movement and gender equality and facilitate them to pursue equality. Women need to speak for themselves on how their status in society, family and workplace needs to be raised and have their rights fully respected.”

In China, gender equality has always meant “equality between men and women”. In theory, this does not seem to have any problem. Yet, in practice, especially in different social settings, Zhang commented that “men” and “women” are terms that are too general, and they tend to neglect individual differences. “Men and women from different economic and educational backgrounds may not hold the same views on gender equality and social roles of men and women. For example, a woman from a rural village and a woman in urban areas, their opinions [on topics above] are likely to be different.”

Not just a women’s issue

One reason Zhang upholds women’s leadership in gender equality and men’s involvement through facilitating roles is the notion that pursuing gender equality must not be simply contextualised as “solving women’s problems.” As a matter of fact, men are part of the causes of gender inequality and still reinforce it. “I sometimes think men need to be at least 50 percent responsible for gender inequality. For example, when domestic violence happens, people always tend to blame women and find issues on them. But the fact is, men are mostly the perpetrators in domestic violence cases; do they not have any responsibility? Of course they do. If it is the case, then it is ‘men’s problems’ that need to be solved, rather than women’s problems.”

But one thing people may not notice is women are not the only victims of existing the gender inequality that penetrates into nearly every part of society. Men also face harms brought by gender-specific issues, for example, rigid gender norms[3]. Zhang mentioned a scandal of the Spring Buds Plan as an example. The Spring Buds Plan was an educational programme launched by the China Children and Teenagers’ Fund (CCTF) specifically set up to fund young girls in poor, rural areas to finish school and pursue their careers. In 2019, the Spring Buds Plan was revealed to be using their funds to support more than 400 boys in rural China without giving special notice in their funding plans. While this scandal led to online criticism and had detrimental impact on CCTF’s credibility, Zhang expressed a slightly different angle.“I fully agree that CCTF’s conduct has damaged its own reputation and its transparency has to be urgently improved. But I think this incident should also trigger us to ask, ‘is it only young girls who need help? How about young boys in poor places?’”

Zhang’s field work experience told him that young boys in rural China do need opportunities to receive education and develop their career, just as young girls do. In a recent educational programme also in Ningxia, Zhang and his colleagues realised that in areas of greater ethnic minority density, among children of junior high school between 12 to 16 years old, the number of boys who quit school was twice as many as the girls. What is noticeable is only eight percent of them quit school due to poverty; 48 percent of the causes of leaving school are not related to the family’s ability to afford tuition fees. One prominent cause Zhang referenced is the conventional ideas of being a man or a woman. “Parents nowadays do not want their high school-age daughters to quit school early, yet for boys, they hold an idea that men must be the sole breadwinners and always provide for the family. So, boys actually quit school at an early age to find jobs and earn money. This is an example of boys as the victims of gender stereotypes. That is why I think when talking about gender equality, one needs to consider equality of rights, responsibilities, opportunities, and freedoms of both men and women.” 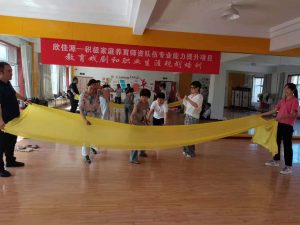 In addition to women’s lack of involvement in leading the gender equality movement, there are still too few leaders who are women in local governments and the business sector. In the Global Gender Gap Report, China’s ranking dropped from the 60th place in 2009 to the 107th place in 2021. From Zhang’s own experience of working with women in rural areas, he told CDB although requirements stipulating a certain number of women have leadership in village “two committees”[4] have helped women reach a certain percentage, in practice, this number does not represent women’s real ability to be involved in decision-making. “Many women are elected to the two committees as a token to fulfill the numbers, not because they are willing to run for office. A lot of men also doubt if women are ‘fit’ to make important decisions for the village, insisting that women do not know much about politics.”

Gender Equality in the 21st century

Zhang has worked hard to promote gender equality for more than two decades. His experience has shown him different facets of this sector. For example, moving from an INGO to a local NGO, Zhang discerned the difference between their working methods. According to Zhang, INGOs have a set of well-structured, well-reasoned analysis frameworks and tools. However, when Zhang moved to the local NGO, he realised INGOS’ methods did not work well there. Most of the frameworks, tools and discourses that are common in INGOs can merely be used by local NGOs to apply for foreign funding. There is an obvious mismatch between INGOs’ and local NGOs’ vocabularies, analysis methods and working styles despite them working on the same social issue.

But since the mid-2010s, international NGOs have slowly begun leaving China. Since then, Zhang found there are fewer operating programmes primarily focusing on gender equality. What also deserves more attention is analyses on social justice and equality from a gender perspective; most commentators still view social advancement from a pure economic or political angle. Zhang urges to explore new methods, tools and perspectives when understanding social development, especially gender equality in China. “As our society advances and contains richer diversity, people will view and analyse ‘gender’ quite differently. My hope is, different groups in society are able to redefine and reframe the concept and standard of ‘gender equality.’”

The COVID-19 pandemic is a turning point, as it revealed gender inequalities that are present but had been very much overlooked. For example, statistics show that women have made up 80 percent of the medical, healthcare, community and front line workers. This revelation has prompted GDS to prioritise women’s physical and mental health during the pandemic.

Since the Fourteenth Five-Year Plan was announced in March 2021, Zhang saw a clear signal from the government to help marginalised groups and the poorest among the poor through encouraging the work of NGOs. A large proportion of this population consists of women and young girls. In 2020, China declared victory in ending extreme poverty across the country. So to further help marginalised groups, Zhang stressed attention must now shift from offering financial aid to empowering people with opportunities to grow and advance. “Certainly, the government is offering help, but considering the sheer size of our country, at the current stage, the government can only cover the basic social protection and services to serve all population’s general needs. But organisations like GDS are able to visit each individual’s case and find out their unique needs.” Based on the latest five-year plan and new societal setting, GDS has also launched new programmes in 2021 that aim to mitigate and remove factors that prevent marginalised women and young girls from obtaining opportunities to achieve personal and vocational development.