The following piece was written by Dr. Dong Qiang, an assistant professor in the China Center for South-South Cooperation in Agriculture of the China Agricultural University. The original was published in Chinese by the International Development Times (国际发展时报) in December 2018. The article summarises the ten main events of the year in the field of Chinese NGOs working in other countries, as seen by the author. The following is CDB’s translation. The views expressed in the article are the author’s own. 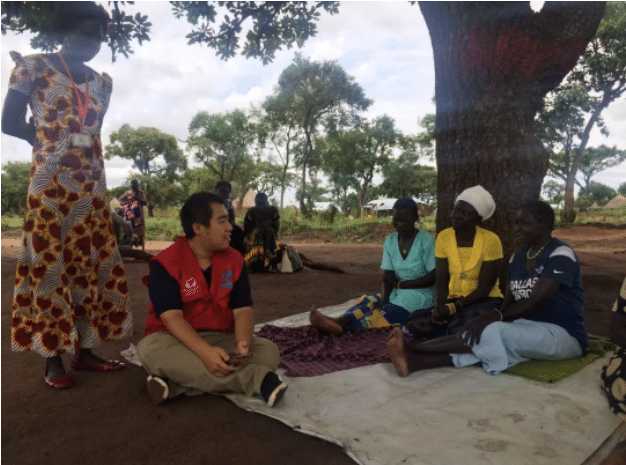 On the morning of April 10, the China Foundation for Poverty Alleviation launched the “Happy Homes – Refugee Self-reliance and Community Integration” refugee project in Uganda. This was the first Chinese civil society organization to carry out charity projects in Uganda. The project promotes food security for refugee families in the Palabek refugee settlements, enhances the resilience of refugees and local communities, and promotes better integration of refugees through cash distribution, agricultural production support and commercial promotions. 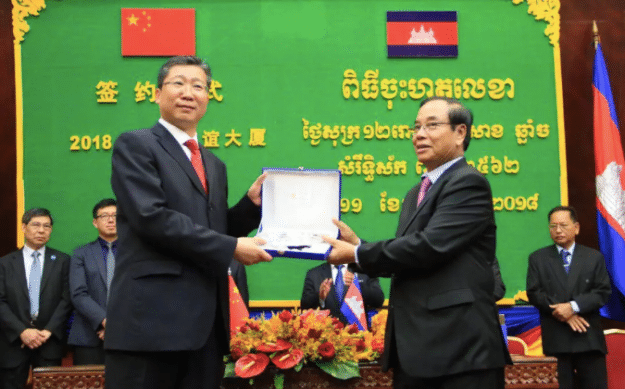 At the signing ceremony of the China-Cambodia People’s Livelihood Exchange and Cooperation Project held in Phnom Penh on the 11th, 10 Chinese social organizations signed 11 cooperation agreements or memorandums with the Cambodian Union Forum and the Cambodian Ministry of Education and Youth involving medicine, education, environmental protection, child protection, volunteer exchanges and other fields. 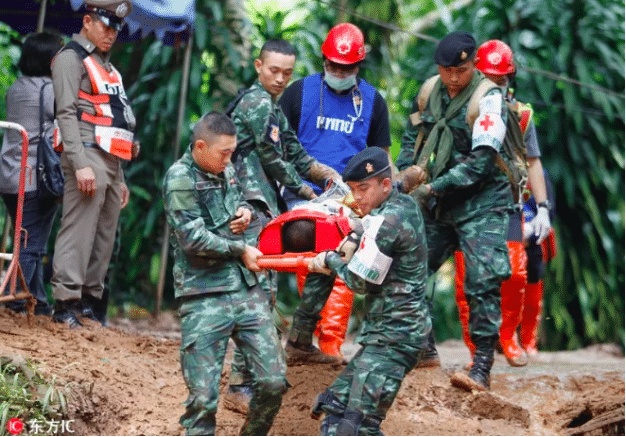 On June 23, during the World Cup in Russia, 13 members of a football youth team in Thailand fell into the cave. A number of international rescue teams, including Chinese ones, rushed to help in the largest search and rescue operation in Thailand in recent years. Two Chinese civilian rescue teams carried equipment to Thailand to participate in the rescue operation. The six cave rescue experts of the Beijing Pinglan Foundation and the five rescuers of the Beijing Green Boat Emergency Rescue Promotion Center worked closely with the Thai side to fully engage in search and rescue operations.

4. The 5th China-Africa People’s Forum is held in Chengdu

On July 23, the 5th China-Africa People’s Forum opened in Chengdu. The China-Africa People’s Forum is one of the activities within the China-Africa Cooperation Forum. The theme of the forum is “Consolidating Civil Society Forces and Promoting China-Africa Friendship and Mutual Trust”. More than 140 civil society organizations and think tank representatives from more than 30 countries were invited to participate. General Secretary of the CPC Central Committee and President Xi Jinping sent a congratulatory letter to the forum. Vice-President Wang Qishan attended the opening ceremony and delivered a keynote speech. 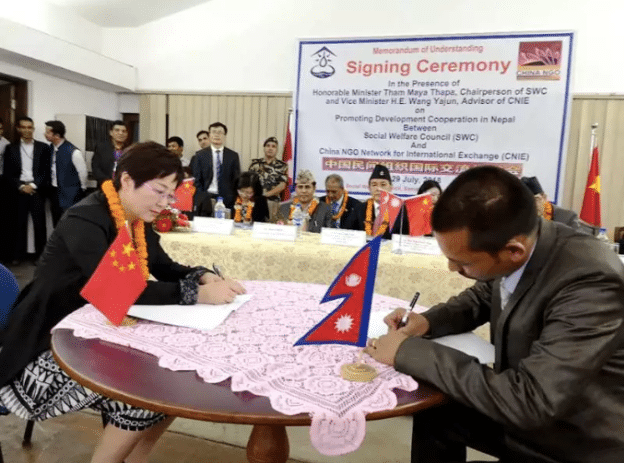 6. The “Self-Regulatory Codes for Chinese NGOs Participating in International Projects” and the “Operations Handbook for Nepal” are released

On October 11-12, the China Foundation for Poverty Alleviation and the China Association for NGO Cooperation jointly held a seminar on “Chinese NGOs Going Out” in Beijing. At the seminar, the “Self-Regulatory Codes for Chinese NGOs Participating in International Projects” and “Operations Guide for Nepal” were released. These two projects were funded by the Asia Foundation and jointly implemented by the China Association for NGO Cooperation and the China Foundation for Poverty Alleviation. It is hoped that the Codes and the Nepal operations guide will help NGOs to carry out activities more effectively when they go out.

On November 6, China participated in the third round of the national human rights review of the UN Human Rights Council in Geneva, Switzerland. On the eve of the review, some Chinese NGOs and organizations jointly held side-events entitled “China’s NGO Development and Human Rights Progress” and “China’s Ethnic Minority Development and Human Rights Progress” at the Palais des Nations in Geneva. Civil society organizations such as the China NGO Network for International Exchanges, the China Foundation for Poverty Alleviation, the China Disabled Persons’ Federation, the All-China Women’s Federation, the China Family Planning Association, and the Beijing Children’s Legal Aid and Research Center attended the event and gave talks about the positive role that Chinese NGOs play in advancing economic and social development and promoting human rights issues.

8. NGOs work together to promote sustainable social and economic development in the Lancang-Mekong region 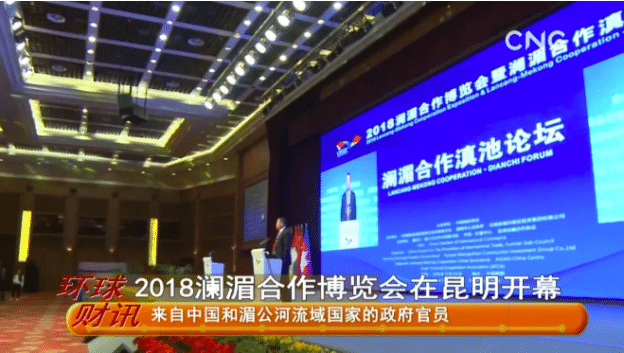 On November 23, the 2018 Lancang-Mekong NGOs Forum was held in Kunming, as one of a series of activities of the Lancang-Mekong Cooperation Expo Dianchi Forum. The forum was hosted by the China Association for NGO Cooperation and more than 100 people, including experts, scholars, and media representatives from government departments, NGOs, and corporations from six Lancang-Mekong countries attended. The aim was to build a cross-border exchange platform for promoting better collaboration within the region’s civil society.

9. Two projects from the China-Africa Business Council are selected as “Outstanding South-South Cooperation Projects” by the United Nations

From November 28th to 30th, the Global South-South Development Expo was held at the UN Headquarters in New York. The United Nations selected 100 outstanding South-South cooperation projects, and four projects from China were shortlisted. The “China-Africa Business Council’s Dubbing Technology Training Project in Tanzania” and the “China-Africa Business Council’s Rapid Building Technology Training Project in Liberia” were selected in the end.

10. Calls made for NGOs to be included in China’s foreign aid framework 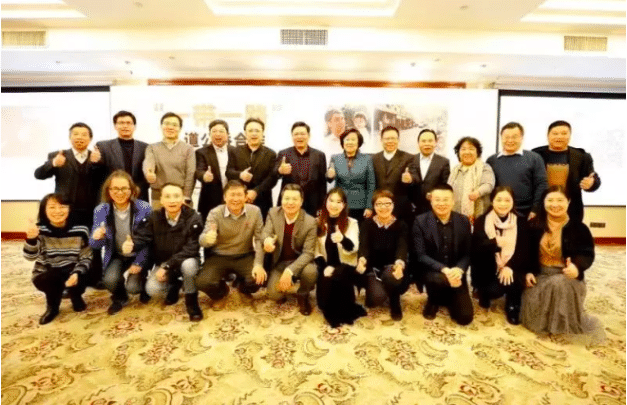 On December 7, the 28th Bimonthly Salon of Foundations was held in Beijing, organized by the Chinese Red Cross Foundation with sponsorship from the China Association for Non-profit Organizations. The participants discussed the recent draft of the “Foreign Aid Management Law” which was released for public feedback, and agreed that social organizations should be considered one of the key agencies for carrying out foreign aid activities, and there should be official arrangements for their involvement in terms of policy and financial support, staff being able to travel abroad, and the growth of international volunteering services.

Chinese NGOs are starting to expand their work internationally. This translated article presents some of the most interesting cases from the past year.