This year, CDB plans to launch an interactive map of all the overseas projects carried out by Chinese NGOs. As part of this project, we are conducting a series of interviews with local NGOs, discussing their overseas projects and the challenges they face. If you work for one and would like your projects to be included in the map, please do not hesitate to contact us at gabriel.corsetti@cdb.org.cn 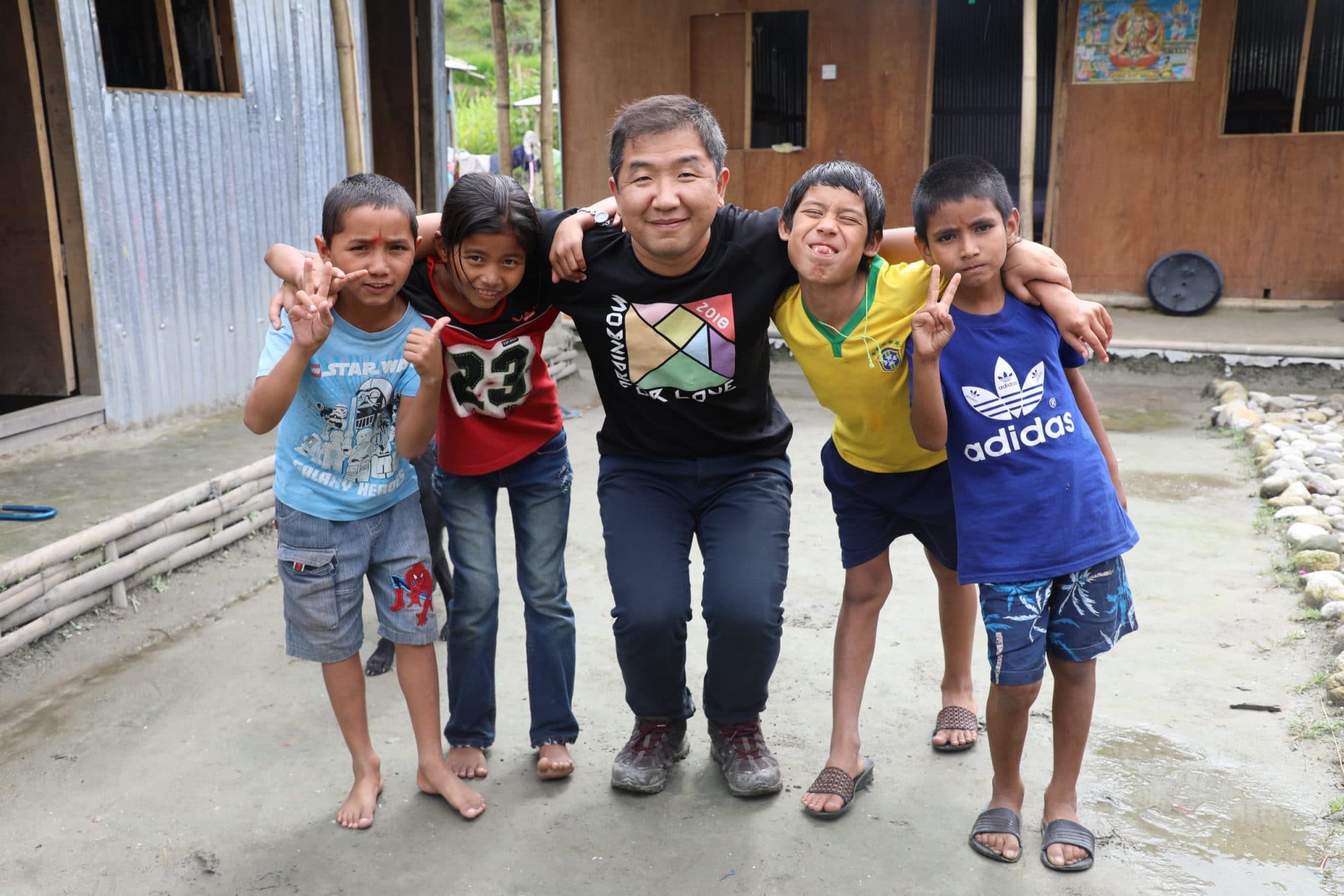 A Chinese NGO might have a thousand reasons to initiate a charity program overseas, but for Ren Zhihao, the founder of the Gansu Rainbow Community Service Center, the reason he first set foot in Nepal was very simple: to lend a helping hand to vulnerable people whenever they need it, wherever they are.

Ren was born in the 1980s, and as a young businessman he never expected to have such a drastic career change. However, in his early 20s, Ren travelled to places where people live in poor conditions. What he saw was to him shocking and unbelievable, and motivated him to join forces with others to help people who are struggling to survive.

Without any experience of charity work, Ren started the journey by contributing his time, skills, money and effort to various kinds of charity work, from participating in disaster relief to sponsoring poor kids to go to school.

Over the years, the pure intention of helping people to get out of poverty has led him to grow a team of volunteers that share the same aim. In order to provide effective services to target populations, the team was developed into an organization and then successfully registered as the Gansu Rainbow Community Service Center with the Civil Affairs Department of Gansu Province in 2014.

A few months later, the young businessman finally gave up his business and became a full-time manager for the charity organization. Looking back at this decision, Ren has no regrets: “doing business didn’t give me a sense of satisfaction. I can always make money any time, why don’t I give myself a chance to try something different when I am still young?”

A year later, Nepal was struck by a massive earthquake that killed nearly 9,000 people and injured nearly 22,000. On the same day, Ren flew to Nepal together with two colleagues from the Gansu Rainbow Community Service Center to provide disaster relief services to the survivors in Kathmandu.

The two-month service set the tone for their following work in Nepal. After that Ren and his team started to run a long-term community rebuilding program by setting up a BODE resettlement camp, and an IDP (Internally Displaced People) camp for 2,000 people displaced from Sindhupalchok district in northern Nepal.

The team provided not only shelter and clean water but also education for the villagers until the end of 2015, when the Nepalese government decided to rebuild the site where the BODE resettlement camp is located. But Ren and the team didn’t stop there. They followed the villagers back to Sindhupalchok and continue to serve them until today. 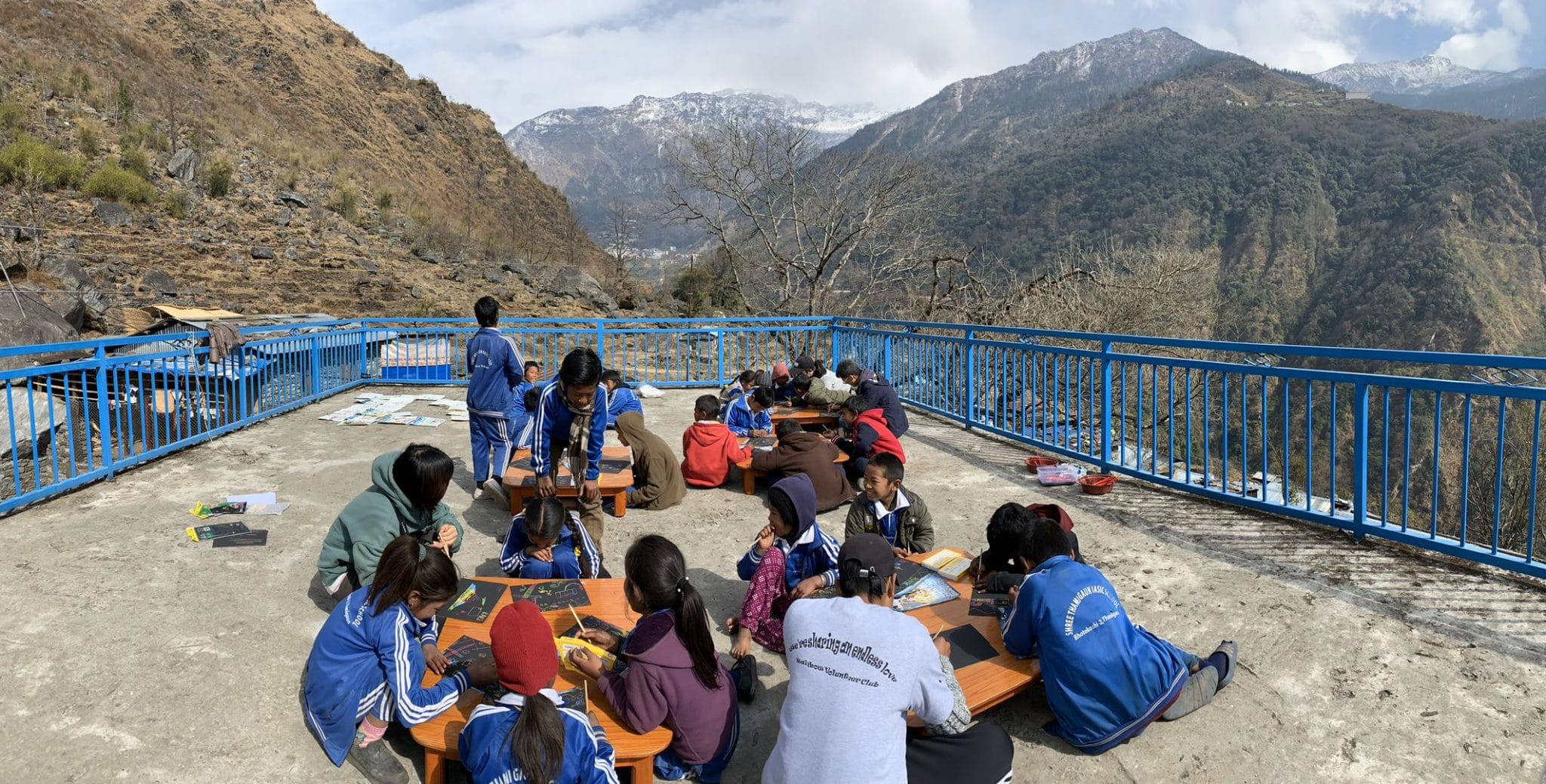 Ren and the team have continued to serve the villagers after they were relocated back to Sindhupalchok (Photo: Gansu Rainbow Community Service Center)

To facilitate the growing number of volunteers and projects in Nepal, Ren thought that it would be a good idea to register as an NGO with the government.

According to him the registration process took several months to complete, and that is considered easy compared with what it would take today. “In 2017 there were countless overseas NGOs that flew to Nepal to join the reconstruction in the aftermath, and the government was relatively relaxed on regulations and rules for NGOs.” He said, however, that the bar is still high for international NGO to get registered in Nepal.

“The classification of NGOs in Nepal is similar to China, with NGOs categorized as local or international. To register an international NGO in Nepal, you need to partner with a local NGO, and a minimum yearly fund is required to be invested into local community projects.”

After thorough consideration, Ren and the team decided to start a whole new local NGO in Nepal called the “Rainbow Volunteer Club”.

“I know the idea of starting an international NGO in Nepal sounds cool,” Ren laughs, “but looking at the long term development of the organization, going local was the best choice we had at that time.”

“We entered the sector at the right time and grabbed the window of opportunity. Now the Nepalese government has tightened the rules and that makes registration more difficult than before”, he says, adding that having experience of working with local staff also provides them with a more solid background to form a local NGO. “We had to adapt to the way they work there, which was not easy,” Ren recalls.

Legally speaking, Ren says, the Rainbow Volunteer Club and the Gansu Rainbow Community Service Center are two independent organizations, but they both share the same values and goals. Each week the members of staff from both organizations participate in the same morning meeting. Nepalese employees based in Kathmandu are required to understand their Chinese counterparts and provide suggestions and feedback when it is deemed necessary.

The Kathmandu office has the same focus as the Gansu office, which is to dedicate their resources to provide all-round development for Nepalese children through proper education and a positive environment.

Currently the Rainbow Volunteer Club has six members of staff and three project sites located in Kathmandu, Sindhupalchok and Pohkara. In 2019, the Rainbow Volunteer Club built and launched the Rainbow-school in Kathmandu, providing free extracurricular and language classes and vocational training for over 100 children in that area. Their aim is to increase the social competency of underprivileged children, helping them and their families to eventually walk out of poverty through education.

To ensure the sustainability of the Rainbow School, the school coordinates with colleges, universities and educational institutions to provide opportunities for volunteers to engage in social service. These volunteer teachers are trained and provided with allowances and scholarships, allowing them to contribute their skills to the school while at the same time being empowered by the program itself.

Besides the BODE camp and Rainbow School, over the years the Rainbow Volunteer Club has been carrying out numerous projects dedicated to children’s development. For example, the Rainbow-SENSE, a comprehensive education support program that helps more than 100 students from Sindhupalchok to complete their high school studies; Rainbow SMART Youth Project, an initiative that empowers Nepalese youth through personal development training, growth camps, networking opportunities with international students and voluntary experiences.

Since they began offering their services after the April 2015 Nepal Earthquake, Ren and the team together with over 5,000 volunteers from 44 countries have sponsored more than 1,000 students and helped 100,000 kids back to school.

Offering economic, material and educational support to people in need, Ren admitted that he is often criticized for his actions to help foreign kids while poverty in China has yet to be eradicated. But he says he never forgets the pure intention that led him on the journey to change people’s lives: “someone needs my help and at that moment I have the ability to help, so of course I will do it. It’s that simple.” 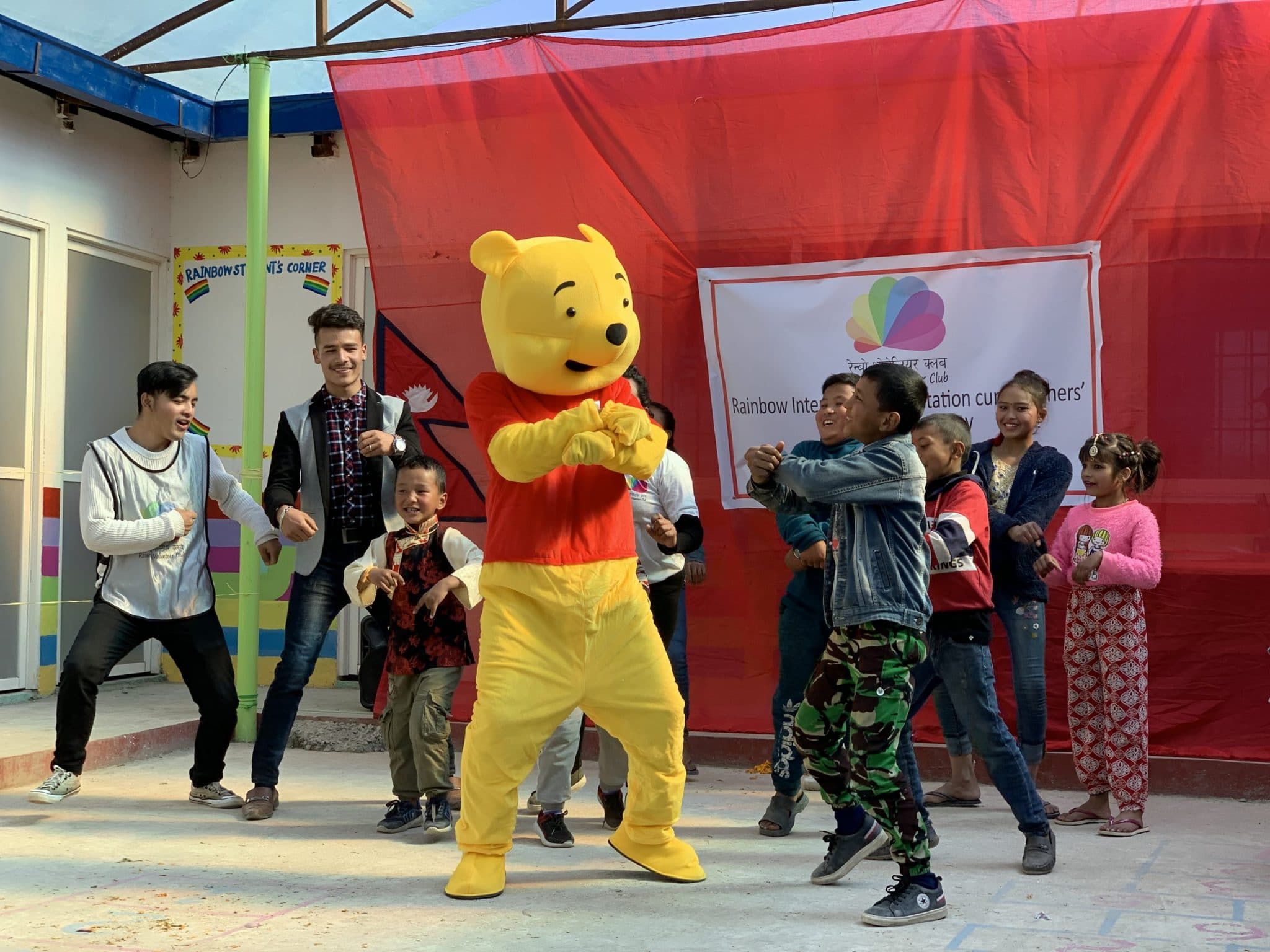 Talking about the advantage of working overseas as a Chinese NGO, the humble young man gives a surprising answer: “In Nepal, there are many international NGOs that have been serving the community for decades. Their experiences are what we could benefit from. So to me, as a Chinese NGO working in Nepal, our advantage lies in having the opportunity and ability to learn from the pioneers of this sector and to keep improving ourselves.”

Ren highlights that what inspired him the most is the dedication and patience of international NGOs in serving the Nepalese community. “Many of them have been here for twenty to thirty years, doing the same thing to help people professionally and efficiently. That’s what I hope to achieve one day. I never thought of making the organization big, the goal was always to get deeper into the community.”

Ren says: “Companionship is one of the most beautiful loves. The gap between local people and us will be narrowed down if we work long enough for them.” After working five years in Nepal, Ren says it’s satisfying when he bumps into kids that they have helped in the past. “They always call out our name excitedly, even on the street. Our Chinese colleagues always make fun on us, saying that we are raising a huge group of children in Nepal!”

A Chinese NGO might have a thousand reasons to implement overseas charity programs in line with their values and goals, but for Ren Zhihao, the founder of the Gansu Rainbow Community Service Center, the reason for setting foot in Nepal was very simple: to lend a helping hand to vulnerable people whenever they need it, wherever they are.