The Covid-19 pandemic has presented a whole new set of challenges for Chinese charities, particularly ones that depend upon outside funding. For many organisations, it is unclear how long financial sustainability can be maintained and projects can be kept running.

In order to provide a clearer picture of the situation, China Development Brief has completed a survey on the challenges and needs of Chinese charity organisations during the Covid-19 pandemic. The survey was carried out between the 23rd and the 30th of April through a questionnaire which was completed by 488 respondents.

A report presenting and analysing the results of the survey was officially released on the 27th of May, during an online press release which saw the participation of representatives of other organisations, including the Narada Foundation, the One Foundation, NPI, and CANGO. The report’s analysis is based on the data provided by 433 of the respondents to the questionnaire, including 363 who work in service-based charities, 50 from intermediary or “hub” charity organisations, and 20 from social enterprises. The remaining 55 respondents, most of whom work in grant-making foundations, international organisations or other kinds of bodies, were not considered relevant for the purposes of the report.

Respondents indicated that the pandemic’s biggest impact was on the normal operation of their projects, followed by the impact on funding and by changes to the external environment. Major complaints included an inability to enter communities to carry out projects (67.55%); a drop in the enthusiasm and participation of target groups (58.45%); a decrease in opportunities to receive funding (68%); operational costs going beyond the original budget due to the pandemic (44.6%); difficulties in recruiting volunteers (54%); and difficulties in ensuring the staff’s safety from infection (44.4%).

When asked what sort of external support they were hoping to receive in the face of these challenges, the most popular choices were “more support and convenience from local governments when carrying out projects in communities” (75.2%); “government departments providing more government procurement activities” (73.6%); “more flexibility from funders in the use of the funds” (62.8%); and “charities being included in the coverage of local governments’ pandemic relief funds” (49.3%).

You can fine the original report here (in Chinese). 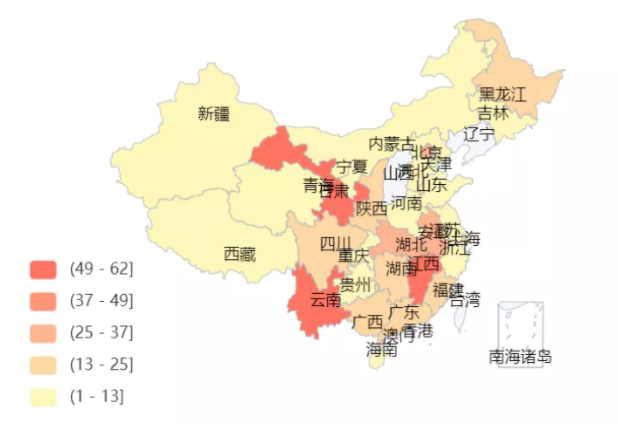 A map showing the geographical distribution of the respondents

PrevPreviousWhat changes does the 2020 Government Work Report portend for the charity sector?
NextReport released on the supportive policies for social organizations facing Covid-19Next