The China Development Brief (CDB) Forum 2020 was held in Beijing on December 9, 2020 and focused on “Challenges and Responses for Cross-Border Philanthropy under COVID-19.”  Leaders from NGOS and experts in relevant fields discussed how the COVID-19 pandemic has affected organisations’ survival and development, grassroots-level struggles faced by communities, and the pursuit of social wellbeing. Below is an excerpt from an abridged compilation of statements shared by guests participating in Roundtable Discussion 2. 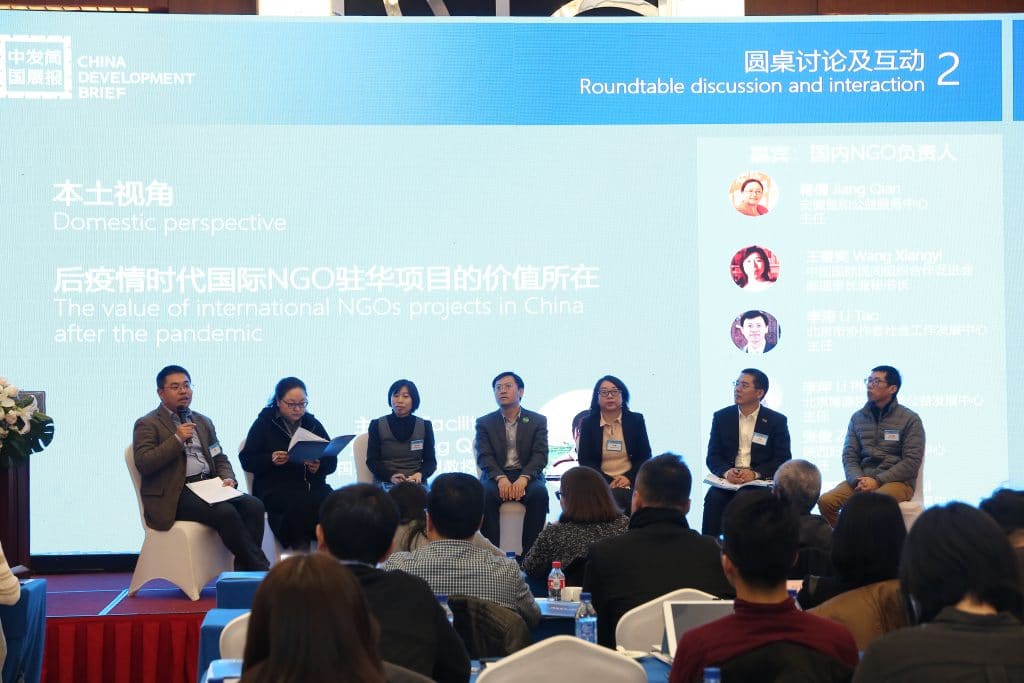 Dong Qiang: Firstly, I’d like to thank China Development Brief for inviting me to this forum. Before the dialogue begins, I would like to make a short speech. I was very fortunate to encounter CDB when I was a postgraduate student at China Agricultural University’s School of Humanities and Development Studies in 2002, and my internship at CDB gave me my first volunteer experience. I remember that CDB was compiling a book on international NGOs in China and I translated the introductions of more than 20 NGOs. Mr. Liu Zhongliang has just mentioned a recent survey with ten active international NGOs in China, but back in 2002, CDB could easily have reached more than 200 international NGOs. According to my personal experience and the messages conveyed by today’s report, it is evident how international NGOs have changed in the past decade or so.

In 2020, Professor Li Xiaoyun and I jointly published a book entitled Civil Society Organisations in International Development – Europe and China. Meanwhile, we registered Action Against Poverty, a grassroots NGO in Yunnan, through which we have taken on some projects sponsored by community partners and World Vision. According to my personal experience, the internal structures of NGOs have dramatically changed over the past decade, which is why, as Elizabeth Knup indicated, the philanthropic sector is not only growing in size, but more importantly, witnessing changes in structural dynamics.

I feel very fortunate today that all guests here are from local NGOs with long-standing partnerships with international NGOs. The first question we are exploring today is how we view the evolution of the value of international NGOs in China.

Wang Xiangyi: Founded in 1992 and registered with the Ministry of Civil Affairs in 1993, China Association for NGO Cooperation has transformed from a public institution into an organisation with branches throughout the country. Starting with UNDP projects in the 1980s, the association has now

established partnerships with more than 180 bilateral and multilateral international organisations. Many guests here are from our partner organisations, such as the European Commission and the Ford Foundation. The value of the association’s cooperation with international NGOs has evolved in terms of including not only financial support, but also insight for our values and vision such as how to identify local needs and respond to social gaps. Meanwhile, we have also learnt from international organisations with good knowledge of project management, financial management and other professional skills.

Following three decades of development, international organisations are now facing challenges of localisation and how to move from a patronage relationship to a partnership with domestic NGOs to equally discuss what the philanthropy sector should be doing in China.

Personally, I believe the value of international NGOs working in China is definitely evident, in at least two ways. 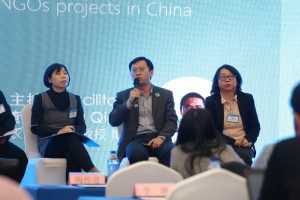 The first is the value of enlightenment. Contemporarily, local NGOs participating in social governance have benefited from the support of international NGOs regarding both systems and approaches. Many years ago, the first generation of Chinese NGOs used to debate on whether the board of directors was a decision-making body or a management body. Questions like this, which seem very naive today, troubled us for a long time back then. Fortunately, international NGOs in China have helped us expand and enhance our knowledge in this area through numerous capacity building and overseas study tour projects.

Another enlightenment is that most of the international NGOs working in China came from Western developed countries experienced in consequences, especially negative ones, brought by industrialisation, globalisation and the urbanisation of society, and they have a strong passion, as well as rich experience, about interventions on issues like environmental protection and gender equality. These issues used to be very novel to local NGOs, at a time when Chinese society generally believed that social development should come at such a cost (of environmental pollution or unequal gender relations), and the local NGOs failed to address the issues. It was international NGOs which, through project funding, directed local NGOs to focus on such issues and, through training, helped local NGOs to acquire the awareness of scientific management and participatory approaches in the contemporary era. Therefore, these critical early intellectual and ideological enlightenments played a landmark role in helping local NGOs build a modern NGO governance system.

The second is the value of service. The scope of services of international NGOs in China mainly covers public health, environmental protection, gender equality and anti-poverty efforts. These services are primarily targeting people in poor, underdeveloped and remote areas, and particularly disadvantaged groups. Meanwhile, local NGOs are facilitated to carry out similar work so that specific groups (reached by international NGOs) in society can be served accordingly. Such facilitation and services have to some extent filled the gaps in public services and the market.

Regarding the evolution of the values of international NGOs in China, I believe international NGOs have been consistently making efforts to keep up with the development and changes of Chinese society, and such efforts should be acknowledged. Another fact worthy of attention is that international NGOs in China are more interested in government-society collaboration than local NGOs are, and are more willing to cooperate with the government. Their timely response to the government’s call reflects a desire to integrate into the local development dynamics of China, which should also be encouraged and protected. 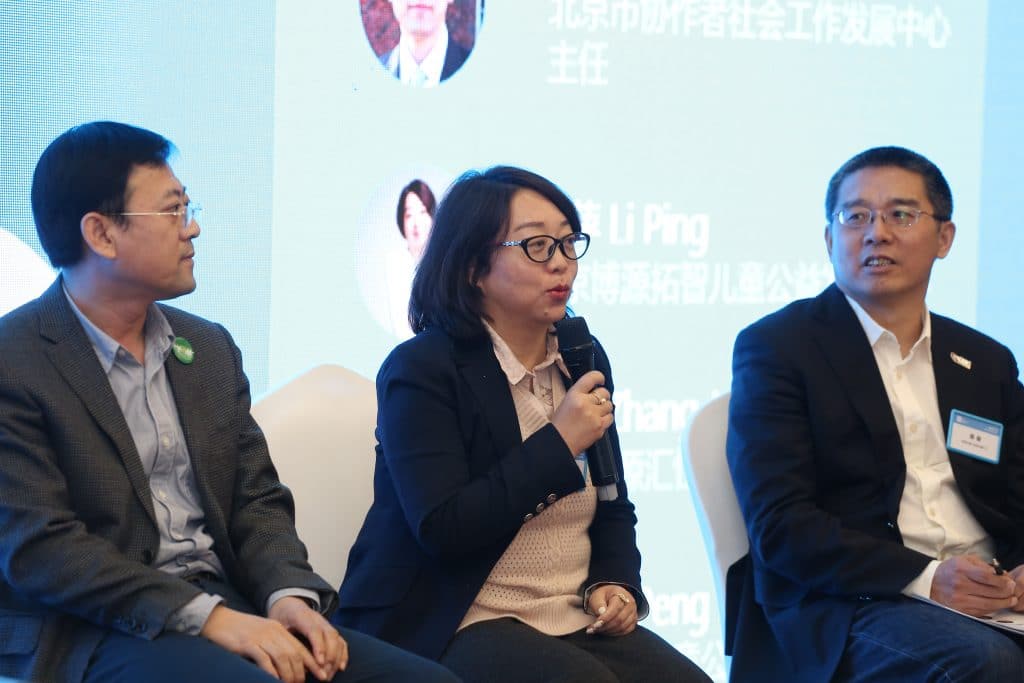 But as they evolved, local NGOs continued to mature and began to build up diversified teams, talents from multiple fields and across borders, mature technical support, and very explicit values and strategies. Meanwhile, international NGOs have also been changing their working models and prioritising specific areas when working with local NGOs. In terms of project proposals, for example, local NGOs will stick to their own experiences and values and act as co-applicants for projects, participating in the whole process as active participants, including writing up project proposals, project planning and design.

In the process of project implementation, local NGOs are usually involved in both macro-level policy advocacy and micro-level grassroots service provision. At the intermediate level, they are also involved establishing standards. Such a model of cooperation illustrates changes in partnerships between international NGOs and local NGOs. International organisations are also very supportive of local NGOs in terms of internal governance, financial system regulations and standards, and capacity building.

In 2003, the pre-school enrolment rate in a county of northern Shaanxi Province was only 11%, but in 2013 the rate had reached 89% because international NGOs invested RMB 500 million (USD 77.2917 million) in education projects in that province. At that time, the total fiscal revenue of a county in Shaanxi was only RMB 500 million, while the funds managed by the director of an international NGO county office were more than top county officials whose annual budget was only about RMB 7-8 million. Nevertheless, the fiscal investment of that county has reached RMB 5 billion, while investments of international NGOs are actually decreasing. I think this represents another milestone.

Events in 2008 signified another milestone, when domestic NGOs were in a state of rapid and furious growth, and international NGOs began to gradually subside. However, along with the growth of domestic NGOs, many principles changed significantly during this period, with NGOs desperately looking for resources and no longer discussing social issues like gender equality and empowerment.

In 2013, some of the concepts and approaches I learnt from international NGOs helped us again when I was working on a government-purchased project at a local NGO. The government viewed them as our magic bullet and believed we should put them into practice. For example, the government indicated the participatory working approach is very much in line with the CPC’s “mass line,” the principle of “from the people, to the people”; the difference is that we have more refined approaches and tools available. Therefore, international NGOs have played a strong role in shaping local NGOs’ values.

Peng Haihui: I have written before about three roles of international NGOs working in China have played.

The first role is to provide funding. There is an international NGO in Jiangxi Province that invested more money for disaster relief in 1996 than the total local fiscal revenue of that county. At that time China was still in the early stage of development – building roads, houses, schools, different infrastructure projects and focusing on rural development, to which international NGOs had provided substantial funding support and made considerable contributions.

The second role is to introduce new theories to local NGOs. International NGOs have brought forward-looking and advanced ideas and visions to China, driving local organisations to improve their concepts and working practices.

Jiang Qian: I am from Anhui Yihe Commonweal Service Center and have only seven to eight years of experience working with international NGOs. I’d like to share my personal experience in three aspects.

Secondly, international NGOs generally have done extensive research on certain social issues and have profoundly explored both development theories and practical approaches. In contrast, local NGOs in China still have much room for improvement in terms of exploration of research topics and practice on the ground.

Thirdly, international NGOs tend to make multi-dimensional, systematic explorations into problem-solving strategies. Perhaps international NGOs might have come to China with some arrogance at the beginning, but over the years they have become down to earth and more aware of local Chinese culture, and shown more respect to the experience of their partners in the process of cooperation and gradually reaching consensus.

Thirdly, care for disadvantaged groups: International NGOs have long been concerned about the disadvantaged groups in China’s development process, such as the homosexual community and patients with rare diseases, which were unheard of in China two or three decades ago. Fourthly, professional support. International NGOs provide professional training and HR capacity building for local NGOs. Fifthly, relationship shifts: The quality and nature of the cooperation between international NGOs and domestic NGOs is expanding and evolving, from being funder-driven in the past to being a relationship of co-designers and co-sponsors, and from being funder-led to being a partnership.