An analysis of Chinese charitable trusts in 2020: pandemic-driven development

What follows is CDB’s translation of an article originally published by the China Philanthropy Times (公益时报) on August 20th, 2020. You can find the original here.

Ever since the implementation of the “Charity Law of the People’s Republic of China”, the number of charity trusts has kept growing, and the size of their assets has kept on growing too. In the first half of 2020 alone 142 charity trusts were established, surpassing the usual figures for a whole year, with total assets reaching 260 million RMB. These trusts have played a very important role in epidemic prevention and control.

So, what were the main characteristics of China’s charitable trusts in the first half of 2020? What are the differences in comparison to last year? A journalist from the China Philanthropy Times looked deeper into this topic.

In half a year, charitable trusts’ assets surpass 260 million RMB

According to public data from the official website of Charity in China (慈善中国), a total of 415 charitable trusts had been established nationwide by June 30th, 2020. Out of those, 142 had been established in the first half of 2020, with total assets of 263 million RMB. The trusts worked in fields including poverty alleviation, epidemic prevention and control, education and other public charitable programs.

Looking at the geographical distribution of charitable trust in the first half of the year, they were distributed unevenly across the country. According to the statistics, charitable trusts were established in 23 provinces, municipalities and autonomous regions. Most filings of new trusts were recorded in Gansu province, with the Lanzhou Civil Affairs Department in strong lead with 59 filings. Zhejiang came in second with 17 trusts, while other provinces recorded under 10 filings each. The data shows that 50% and 56% of the filings were recorded in the central-western region and the eastern region respectively, while trusts in central provinces accounted for only 4% of the total. 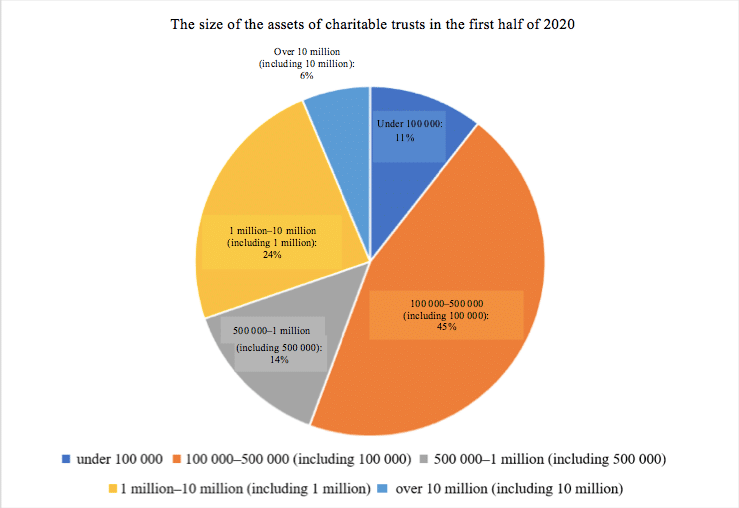 Regarding the duration of these charitable trusts, a majority were short-term. Almost half of them were set to last for five years or less. Perpetual trusts accounted for 14.08%, while there were only two cases set to last for more than 10 years, accounting for 1.41%. The effects of these short-term trusts are still visible, mainly because most charitable trusts from the first half of the year were used for the prevention and control of the Covid-19, which required immediate results.

Looking at the trustees of charitable trusts, the prevalent type was enterprises. According to the data, businesses accounted for 60% of charitable trustees in the first half of the year. Among them there were trust companies, but also financial and real-estate businesses. Social organizations, individuals and mixed entities accounted for 17.61%, 9.15% and 8.45% respectively, whereas the administrative departments were a trustee in only one case.

Additionally, trust companies accounted for more than 90% of trustees. The majority of charitable trusts (59 of them) were assigned to China Everbright Trust Co., Ltd. Joint trusteeships between trust companies and charitable organizations stood at 7.75%. In the first half of the year, there were no cases in which a charity organization acted as a single trustee.

Lastly, more than 60% of charity trusts in the first half of 2020 had no appointed supervisor. From the statistics, we can see that only 33.1% of trusts had an appointed supervisor; more than 80% appointed law firms as a supervisory body, while the remaining few were supervised by individuals, enterprises, or social organizations.

New characteristics during the pandemic

Second, the uneven geographical distribution of filings for charitable trusts continues to increase. Out of the filings for charitable trusts in 2019, 55% were in the east, 34% were in the west, and 11% were in the center of the country, while according to the statistics from the first half of 2020, the mid-western regions and the eastern regions accounted for 40% and 56% respectively, while the central provinces only accounted for 4%. From this comparison, it is evident that while the western region is working to catch up, the proportion of filings in the central region is decreasing.

How charitable trusts help to control the pandemic

Looking at the aim of the trusts, out of the 81 charitable trusts related to the prevention and control of the pandemic, 35 did not designate a specific use. However, the remaining 46 did specify a clear use of their assets and name beneficiaries. Of these, 18 are used for first-response medical care and safeguarding emergency support staff; 14 are used for the procurement of supplies; 6 are for targeted donations to medical teams; 5 are used for volunteers and public safety; 3 are used for the care of special groups, including support for transportation drivers, migrant workers, and poor families.

So, how are charitable trusts for pandemic prevention and control being implemented? According to the statistics, out of the 81 pandemic-related charitable trusts, more than 80% did not submit their transaction processing and financial disclosure on the Charity China website, and only 14 projects were completed and made public. Of these, one that particularly stands out is the “Guangxinshan” series of charitable trusts filed with the Lanzhou Bureau of Civil Affairs, with the Guangdaxinglong Trust Co., Ltd. as trustee. The funding and operations of all 12 of these trusts was made public, and a total of 3,166,800 yuan was donated. The China Construction Investment Trust announced two trusts with a total of 400,000 yuan. Currently, the funds that have been made public account for 2.46$ of all the pandemic-related charitable trusts. As for the other charitable trust projects that have not been made public, the China Philanthropy Times will stay on the look out!

The role of charitable trusts in the prevention and control of the pandemic is intimately linked to the inherent advantages of a trust, like the strong flexibility and the healthy supervision mechanisms, as well as to the future development of the philanthropy sector. However, in terms of tax incentives, it cannot be ignored that charitable trusts suffer from some obvious shortcomings.

On February 6, 2020, the Ministry of Finance and the State Administration of Taxation jointly published the “Announcement on the Tax Policies for Donations Supporting the Prevention and Control of the Novel Coronavirus,” which provides a number of tax incentives for donations related to pandemic prevention and control. And yet, even though they constitute an important way of doing philanthropy, charitable trusts have not yet received any concrete, preferential tax policies.

However, in the long run, their active role during the pandemic will greatly promote the public’s understanding of charitable trusts, demonstrating their advantages and raising enthusiasm for charitable trusts from companies and the public. At the same time, the constantly rising figures show that charitable trusts have broader development prospects with every passing year.

With the deepening of the public’s understanding and increasing enthusiasm from companies, the laws and regulations on charitable trusts will inevitably improve over time, and their organizational mechanisms will also continue to be optimized to best help the public, helping the development of the philanthropic sector.

142 new charitable trusts were established in China over the first half of 2020, with total assets of 263 million Yuan between them. A majority of them were created specifically for the fight against the Covid-19 pandemic. This piece offers an analysis of the situation concerning charitable trusts in China, replete with facts and figures.

PrevPreviousLiu Hung To: Chinese NGOs going out have a long but meaningful way ahead
NextThe Ministry of Civil Affairs releases important data on social organisations in 2019Next