This is an abridged translation of the article written and published by 大米和小米 which can be found here.

On the 18th July, a few families preparing to view their newly allocated public rental housing were sent alerts that due to poor weather conditions their viewings had been rearranged. It was a perfectly fine day, and after looking online the true reason for the change of plans emerged.

“17 mental patients are moving into our 75 thousand/m2 compound. What should we do?”, read one headline. What was disturbing about these articles was that the private personal details of the families moving into the public housing were plastered across each one, including their names, their partial ID numbers and the health statuses of their children. 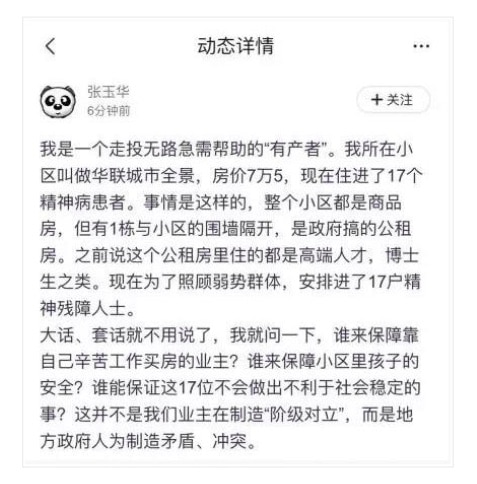 (Translation of the above screen shot from the original article: “I am a “property owner” with nowhere else to turn. The compound in which I reside, called Hua Lian City, Quan Jing, property price of 75 thousand, is now going to be home to 17 mental patients. The situation is as follows, the whole compound is commercial buildings apart from one building which is separated and is government public housing. Previously they said that this housing would be for high-level people like PhD students. Now, in order to look after weaker groups, they’ve arranged for 17 mentally disabled people to move in. There’s no use in engaging in big talk or cliches, but I just want to ask, who is going to protect the property owners who bought these apartments with their hard earned money? Who can secure the safety of the children in the compound? Who can guarantee these 17 people won’t do something harmful and disturb the social stability? This isn’t property owners creating “class antagonism”, it is the local government creating issues and conflicts.”)

The residents of the compound were protesting the arrival of the people moving into the public rental housing block of their compound, claiming “17 mental patients” were moving in and would disrupt the peace and jeopardise the safety of the other residents. These 17 so-called “mental patients” actually include 15 families with autistic children, the majority around the ages of 6-12 years old. For the parents of these children this was particularly unsettling, as their private information was spread across the internet, and extensive negotiations were required in order to get it taken down. And that is not to mention the labelling of their children as “mental patients”.

In June, to comply with national, provincial and city level regulations to provide increased social security to those with disabilities, preferential allocation was to be given to families with registered disabilities.

On the 16th of July the results of the final allocations of the public housing were released. Out of 24 successful applicants (from a total of 41), 17 apartments were allocated to those registered with mental disabilities. Once these allocations were made public, residents began spreading the news and protesting that mental patients would be moving into the public housing block of the compound. 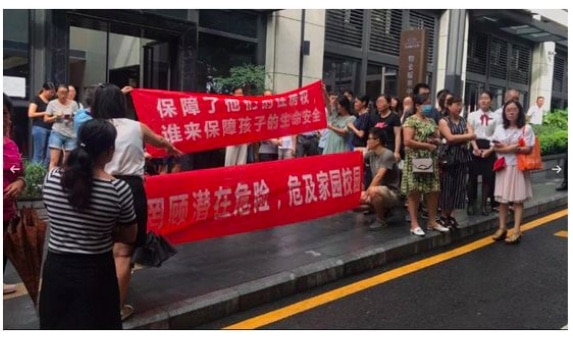 The Quan Jing Hua Yuan compound is located close to a metro station and amenities. It is a high quality compound.

Since the completion of the compound over 800 commercial (or privately occupied) apartments have been occupied, and out of the 374 public housing apartments 350 have been allocated, with a remaining 24 apartments, all of which are located in building 2.

Building 2 is separated from the rest of the commercial buildings by a high wall, has it’s own management system and does not share the same entrance as the rest of the compound. For residents of building 2 to enter the building they must either use an external road or go through the underground parking.

This is not the first time public and commercial housing has been segregated in Shenzhen, and in response the Shenzhen government published regulations prohibiting the building of walls and other such mechanisms for segregation. Other publications have condemned these practices as unfair, arguing that the compound is for public sharing and that building walls does not ensure the safety of the residents. 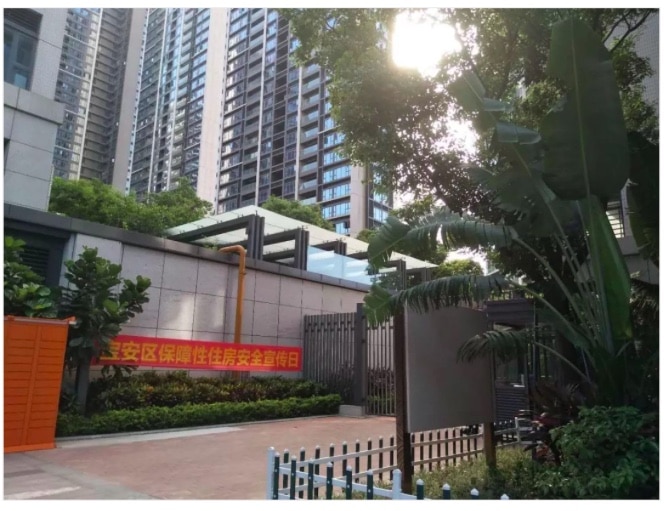 How did “mental disability” (精神类残疾) turn into “mental illness” (精神病)?

Out of the 17 households with mental disabilities, 15 are families with children aged around 6-12 with autism, some of whom go to normal schools and some who go to the local special-needs school.

The following are the remarks of some of the current residents of the Quan Jing Hua Yuan compound regarding the release of the new allocations of public housing:

The following are some of the remarks of the parents of the autist children labelled as “mental patients”:

How To Resolve The Issue

Some parents have decided to give up on this housing but hope that the government can prioritise them in future allocations and they will soon be given a new home. Other parents hope that in the future there will be a set limit for the proportion of housing allocated to those with mental disabilities so that there will be less disturbance among the other residents and they can feel more at ease.

The families affected by this issue hope that this creates a platform for those with similar experiences to come together, spread information and raise awareness, to reduce misunderstandings and misinformation about mental disabilities and special needs. They are hoping to let the wider community understand their difficulties in order to give better support.