This article was originally written by Prof. Tang Lixia, from the China Institute for South-South Cooperation in Agriculture of the China Agricultural University, and published by the WeChat account of the China Lingshan Council for the Promotion of Philanthropy (中国灵山公益慈善促进会) on the 27th of December. What follows is CDB’s translation. The article summarises the ten main events of the year in the field of China’s foreign aid, as seen by the author.

So we have got to the end of the year again. This year has proven to be an extremely important one for China’s foreign aid. Many events have happened that will shape the future development of China’s role in this space. Below we have selected the ten most consequential events of 2018 in this area.

1. The Addis Ababa–Djibouti railway is opened

On January 1, the 752.7 kilometre electrified railway connecting Ethiopia’s Addis Ababa with Djibouti was officially opened to traffic. This railway was regarded as an early harvest of the “Belt and Road Initiative” and of the “10 Major China-Africa Cooperation Plans” presented at the Johannesburg Summit of the Forum on China-Africa Cooperation. It is also a landmark project for the “three networks and one transformation” (三网一化) (a high-speed railway network, a highway network, a regional aviation network and industrialization) and cooperation on industrial capacity between China and Africa.

The railway adopts the Chinese railway standards, and after its opening the Chinese contractor will also provide a six-year operation and maintenance contract and a two-year technical service contract, bringing China’s railway operations and maintenance management experience to Africa. The opening of this railway marks a new stage in infrastructural cooperation between China and Africa. 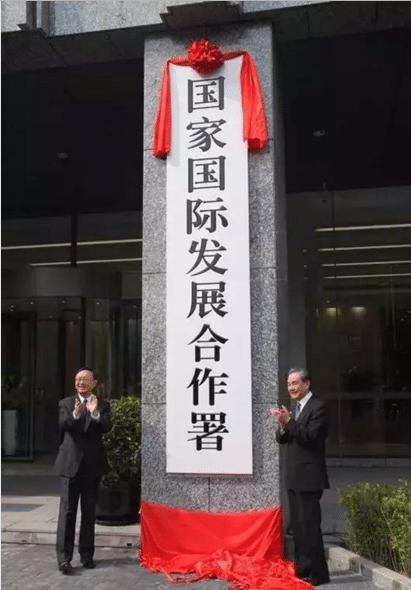 In March, the Chinese government promulgated the “Regulations on Deepening the Reform of Party and State Institutions”, and announced the establishment of the China International Development Cooperation Agency as an organ directly under the State Council. The government combined the responsibilities of the Ministry of Commerce for foreign aid work and of the Ministry of Foreign Affairs for foreign aid coordination into this new institution. The China International Development Cooperation Agency is supposed to formulate strategic guidelines, plans and policies for foreign aid, coordinate major foreign aid issues and provide advice, revise foreign aid approaches, prepare foreign aid programs and plans, identify foreign aid projects, and supervise and assess the implementation of these projects.

As of now, the establishment of the China International Development Cooperation Agency is progressing smoothly. By September the Chinese/English/French portal of the organization had been launched online, and its internal structure had been basically set.

On April 23, the closing ceremony of the South-South Cooperation Assistance Fund’s aid project to Pakistan was held in Islamabad, marking its successful completion. China’s South-South Cooperation Assistance Fund was announced by President Xi at the United Nations Development Summit in September 2015. China provided US$2 billion during the first phase and increased it by US$1 billion in 2017 to support sustainable development in developing countries.

The South-South Cooperation Assistance Fund started a project in November 2017 in cooperation with the World Food Programme and the United Nations Development Programme, in order to improve livelihoods in areas of Pakistan including Balochistan and tribal areas affected by war and natural disasters. The project lasted four months, helped some 8,100 families in the tribal areas of Pakistan to return to their homes, and provided teaching and learning facilities to 423 schools in Balochistan benefiting nearly 240,000 local people. The successful completion of the project marks the fact that the South-South Cooperation Assistance Fund, a new type of Chinese foreign aid, has entered its operational phase.

4. The seventh forum on China-Africa cooperation is held in Beijing

Making a blueprint for the future of China-Africa cooperation 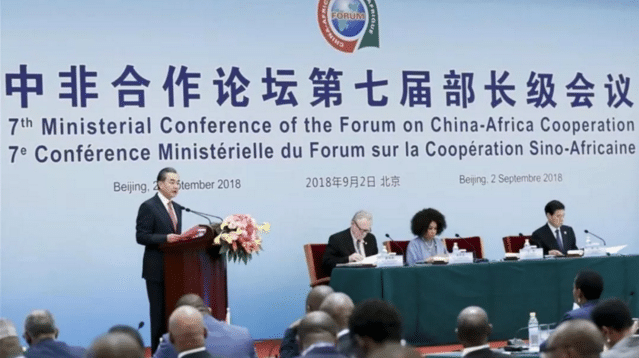 In September this year, the 7th Summit of the Forum on China-Africa Cooperation was held in Beijing. Compared with previous summits, this one had a larger scale. Heads of state, heads of government, heads of delegations, presidents of the African Union Commission, foreign ministers and ministers responsible for economic cooperation from China and 53 African countries attended the forum and ministers’ meetings respectively.

The summit issued the Beijing Action Plan (2019-2021), consolidating collaboration between China and Africa in politics, the economy, social development, the humanities, peace and security, and international cooperation over the next three years. China proposed to provide 60 billion US dollars in support of Africa through government assistance, financial institutions, and corporate investment and financing. The collaboration will manifest itself in eight major action plans, blueprinted as industrial promotion, infrastructure connectivity, trade facilitation, green development, capacity building, health care, people-to-people exchanges, and peace and security.

China’s improvement on its strategies toward Africa has had a positive impact on the international community’s policies regarding Africa. Western countries have been adjusting existing policies and introducing new ones in the hope of creating a more favourable environment for Africa’s development.

5. Japan announces it will cease providing aid to China

In October, on the eve of Japanese Prime Minister Shinzo Abe’s visit to China, the Japan Broadcasting Corporation published an article entitled “Japan ends aid to China, moves towards “reciprocal” development”. This move fits in to the broader trend which started in 2008, when Japan ceased to provide loan assistance, after which it has gradually cut down on the amount of aid and technical assistance to China, in the end announcing the cessation of all its official aid. The China-Japan relationship in international development is moving toward collaboration, especially through trilateral cooperation mechanism and other multilateral mechanisms.

In 2007, the National Bureau of Statistics of China announced that the country’s per capita gross national income reached $2010 in 2006, becoming a middle-income country by the World Bank’s standard. The World Bank actually regarded China as a middle-income country as early as 1997, and stopped providing soft loans to China in 2000. The World Food Program announced it would cease food aid to China in 2005, Germany decided to stop giving aid in 2005, and the United Kingdom announced it would stop providing aid in 2011. The great majority of traditional aid providers have gradually reduced or stopped providing development assistance to China, and interactions have shifted towards collaboration or tripartite cooperation. In the field of international development, China has moved from being a “recipient country” to being a “cooperation partner” and a new “provider country” of development material.

6. Press conference on Chinese agricultural aid projects in Africa is held with UNDP

On October 29, the China International Development Cooperation Agency and the United Nations Development Program (UNDP) jointly organized a case study report on China’s agricultural aid projects to Africa in the United Nations in New York. This was the first such cooperation between the Chinese government and the UNDP. The report contained an evaluation of two agricultural technology cooperation projects, one in Guinea-Bissau and the other one at the Agricultural Technology Demonstration Centre in Mozambique, serving as a reference for what can be achieved through South-South cooperation.

China has donated 80 million US dollars to FAO to establish a trust fund to promote South-South cooperation in global agriculture. So far, the China Trust Fund project has implemented 12 national projects in 11 countries, dispatched nearly 300 Chinese experts and technicians to carry out field demonstrations and trainings for local farmers and technicians, organized more than 50 capacity building training groups in China, and invited more than 500 senior officials and experts to visit China. The first assessment report of the China-FAO South-South Cooperation Project was also released during the forum.

8. The 26th APEC Forum is held in Papua New Guinea

The deepening of cooperation between China and the Pacific island countries began in 2014, when President Xi Jinping visited Fiji for the first time and held a collective meeting with the leaders of the eight countries to enhance the relationship between them and China and expand their collaboration. In particular, after the “Belt and Road Initiative” was put forward, in-depth cooperation began between China and the Pacific island countries in infrastructure and interconnectedness, marine development, environmental protection, development and utilization of fishery resources, and responses to climate change.

In November, the China International Development Cooperation Agency issued the draft of the “Foreign Aid Management Law” and publicly solicited feedback from all levels of society. The draft has a total of six chapters and 42 articles, clarifying the basic concepts of foreign aid and the key supervisory authorities, specifying the foreign aid policies and the main responsible institutions, laying out the use and management of three types of Chinese aid funds, announcing that project-based aid is the key approach of Chinese foreign aid, explaining the management functions of government departments at all levels, and clarifying the supervision and evaluation of foreign aid and the related legal responsibilities. The release of this draft also signifies that China’s foreign aid will move towards a more institutionalized and standardized development.

Healthcare assistance has become an important part of China-Africa cooperation 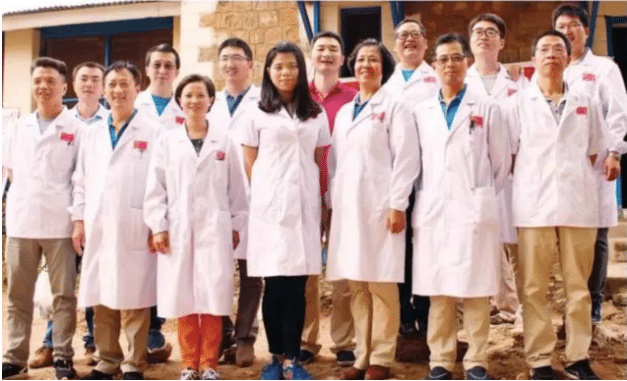 This year marks the 55th anniversary of the dispatch of China’s foreign aid medical team. In 1963, China dispatched the first non-medical team to Algeria. Since then more than 20,000 medical personnel members have participated in foreign aid medical work in Africa, treating 220 million African patients throughout 55 years. Currently, there are Chinese medical teams in 45 countries in Africa.

In addition to dispatching medical teams, China has done a lot in Africa in terms of health assistance. It has built hospitals in 32 countries, signed cooperation agreements with hospitals in 15 African countries including Ethiopia and Zanzibar (Tanzania), carried out demonstration projects on maternal and child health in Cape Verde, Ethiopia, Zimbabwe, Sierra Leone, Malawi, Ghana, and Madagascar, and held more than 30 “brightness trips” in which more than 200 ophthalmologists were sent to perform surgery on more than 9,000 African cataract patients. Healthcare assistance has thus become an important part of China-Africa cooperation.

The ten most important developments for Chinese foreign aid in 2018, as seen by Professor Tang Lixia from the China Agricultural University.