A recent case in Yunnan has provided an encouraging example of an institution being taken to task by bloggers over the use of sexist language in recruitment ads, and providing a quick and satisfying response to the controversy after the involvement of the provincial Women’s Federation.

On January 24th, a group of bloggers known as the “gender discrimination detective group” (就业性别歧视监察大队) denounced the sexism wording contained within a recruitment ad published on Weibo by the Qujing No.1 People’s Hospital (曲靖市第一人民医院), based in the city of Qujing, Yunnan province. Statements like “male graduates prioritised”, “men only” and “men preferred over women” can be seen in the ad.

Two days later, the Qujing No.1 People’s Hospital responded on Weibo, denying that they intended to discriminate against women. On the 30th, a member of staff from the human resources department told a journalist in an interview that the accusation is based on an inadequate understanding of the distribution of posts within the hospital.

This appears less than convincing however, considering that the 2018 “recruitment announcement” issued by the hospital on January 5th started with the phrase: “on condition that all other qualifications are met, male master graduates with certificates as medical practitioners and training certificates are preferred for all positions.” Specifically, the department of gynecology stated “men first”, and the requirements of the departments of nuclear medicine, magnetic resonance and radiology all contained the words “male only”.

Vice director of the Qujing No.1 People’s Hospital Ding Shaoping explained that when the recruitment drive started, most of the departments recruiting new staff did indeed prefer male workers. He added that currently there is a disproportion between the number of male and female workers in the hospital, with the men much fewer in number than the women. In Departments such as Obstetrics and Gynecology, all of the workers are women. Ding added that out of 80 female nurses in the emergency department 20 are currently on a maternity leave, and if more male nurses joined the situation would improve. As a result, the hospital aspires to balance the gender ratio of the staff.

Ding also claimed that the minimally invasive surgeries and the tumour surgeries newly added to the Gynecology department require a lot of physical work, and male workers will generally be at an advantage. He futher explained that the departments of nuclear medicine, magnetic resonance and radiology demand intensive work in a radioactive environment. Considering the exposure to hurt and danger and the fact that women may wish to give birth, these positions are thought to be more suitable for men.

Director of human resources Hou Cai’e also said that the hospital is a “special working environment” where there are a lot of exhausting tasks, hence it might be more appropriate to assign men to some of the positions. Alongside the posts mentioned before, departments including emergency, anesthesiology and ICU have also seen a big demand for male medics.

The Women’s Federation of Yunnan sent standing vice-director of the Yunnan Provincial Working Committee on Children and Women Wu Wanming to the hospital to deal with the dispute. After hearing Ding’s explanations, Wu told the hospital that it is state policy to treat men and women equally. It is understandable to encourage more men in industries ‘dominated’ by women and viceversa, but the necessity to balance the gender proportion does not provide justification for disciminating statements, and by no means can women’s interest be ignored.

The hospital was then advised to correct their recruitment announcements, provide a positive response to any criticism, and consult gender equality evaluation experts in Yunnan province about the wording of their job descriptions. Wu said that awareness of equal rights for both genders must be raised among medical workers in the future.

On the evening of the 31st the hospital gave a reply to the bloggers complaint on their official Weibo account, admitting the mistake and promising that they would replace the discriminatory content. 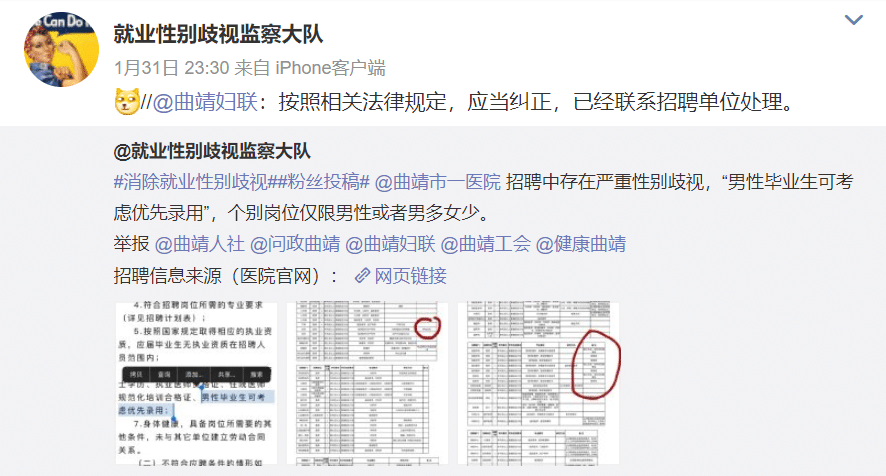 On February 1st Ding Shaoping apologized for not paying enough attention to gender equality and the related laws. On the following day, the hospital revised its recruitment announcement by removing the controversial wordings, and increasing the available positions from 203 to 231. As suggested by Zhao Qun, an expert in society and gender studies, the ‘male only’ parts were deleted and notifications added that the jobs in certain departments are ‘high-risk, exposed to radiation and intensive’.

In response, the bloggers of the “gender discrimination detective group” expressed their appreciation at the hospital’s timely and positive reaction. 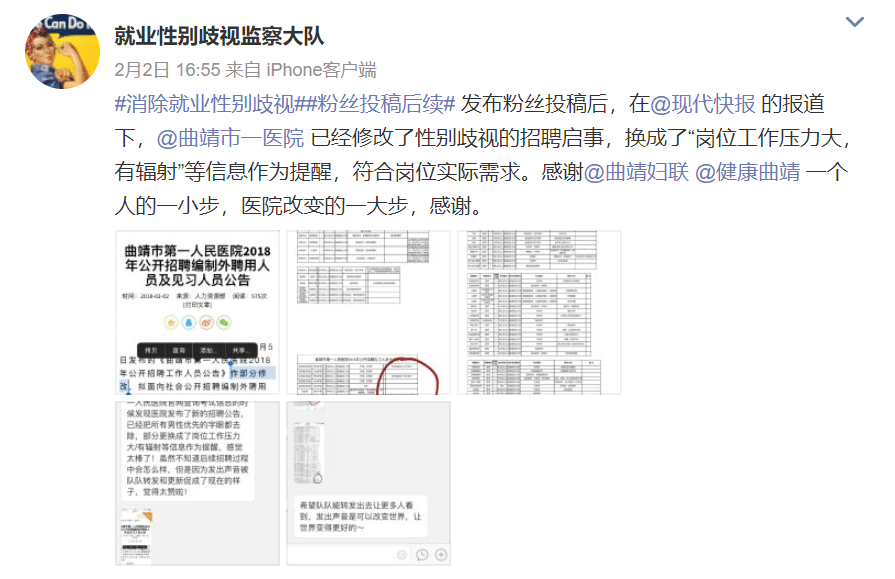