Workshop on the Overseas NGO Law held in Ningbo

A workshop on the Overseas NGO Law was held by the Amity Foundation on May 25 in Ningbo, with the purpose of studying the law and discussing the way forward for exchange and cooperation with international civil society under its framework. Over 70 people attended the workshop, including representatives from both overseas and Chinese NGOs, academic institutions and government departments. 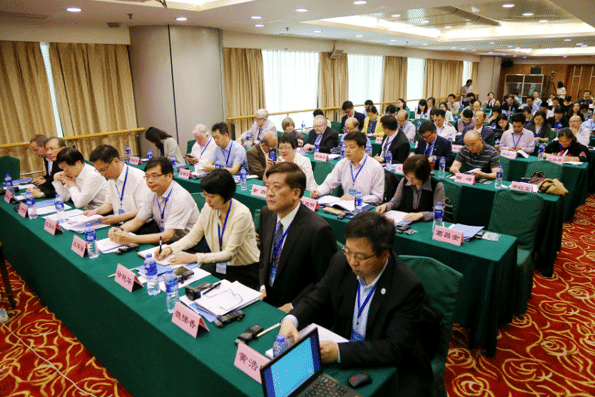 The opening speech was delivered by Li Guohua, the Deputy Head of the Provincial Department of the United Front Work and Director of the Bureau of Religious Affairs of Jiangsu Province. During his speech, he spoke highly about the positive role played by overseas NGOs during China’s 40 years of opening up and stressed that the Chinese government has welcomed overseas NGOs all along to engage in cooperation and exchange with an open and positive attitude. The workshop is very necessary and timely according to Li, for it serves as a bridge between the government and overseas NGOs in that it not only facilitates a better grasp of the law on the part of the NGOs but also engenders a better understanding of their needs from the government’s part, which will enable the government to provide better services in the future. 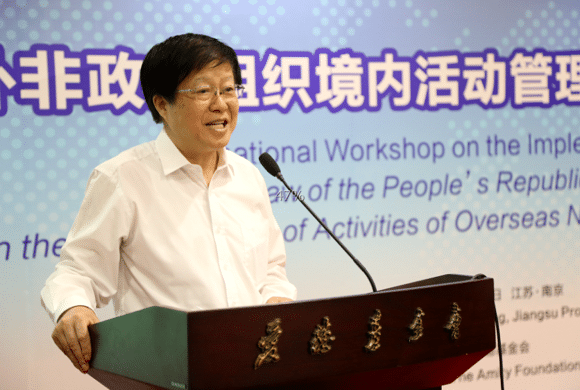 Qiu Zhonghui, the President of the Amity Foundation, stated that since the Overseas NGO Law came into effect, there is a great need for a better understanding of the law. Specifically, many overseas NGOs and international friends would like to find out how to legally register and file to record temporary activities and how to engage Chinese social organizations in activities related to exchange and cooperation. The workshop was conducted to meet such a need and bring stakeholders together for a meaningful exchange and discussion of the law and its implementation. Qiu stated his belief that China will become more proactive, open, confident, cooperative against the backdrop of “One Belt and One Road” initiatives promoted by the government, and as a result the future of cooperation with overseas NGOs will be more rule-based, extensive and active. 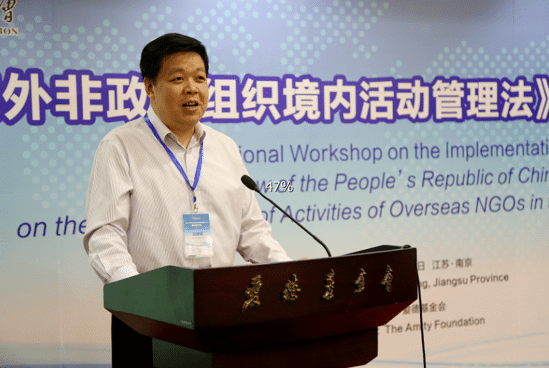 The deputy director of the Overseas NGO Management Office of the Public Security Bureau of Jiangsu Province, Zhao Jianming, also made a keynote speech. He stated that as the first comprehensive law governing all aspects of the activities and operations of overseas NGOs within mainland China, the law fills in the blanks in the government’s management of overseas NGOs’ activities. He went on to elaborate various key aspects of the law including the legislative background, the requirements for setting up representative offices, the application procedures and the requirements for documentation submission. In closing, he praised the positive impact overseas NGOs have had in areas such as cultural exchange, environmental protection, poverty alleviation, health and medical assistance and humanitarian relief, and the indispensable role NGOs played in both domestic and global governance. He expressed the government’s commitment to utilize innovative methods in service provision and the safeguarding of overseas NGOs’ interests in China. 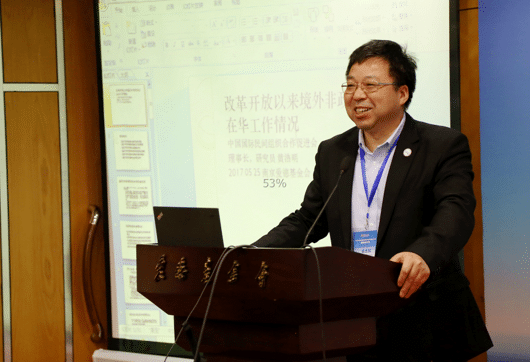 The President of the China Association for NGO Cooperation (CANGO), Huang Haoming, spoke at the workshop as a representative of the NGO sector. Huang gave participants an overall picture on the trajectory, motivation, channels, functions and constraints on the development of overseas NGOs in China. He is of the opinion that overseas NGOs are an important force in building a “harmonious society” and creating a modern China. A “harmonious society” should not only have an advanced economy, but more importantly there should be an equal distribution of wealth, creativity, a regulation of people’s behavior and protection of natural diversity, and overseas NGOs’ play critical roles in promoting these goals. Huang hopes that under the framework of the new law, overseas NGOs will be able to reserve their characteristics and strength and embark on a path of healthy development while remaining compliant with the law. 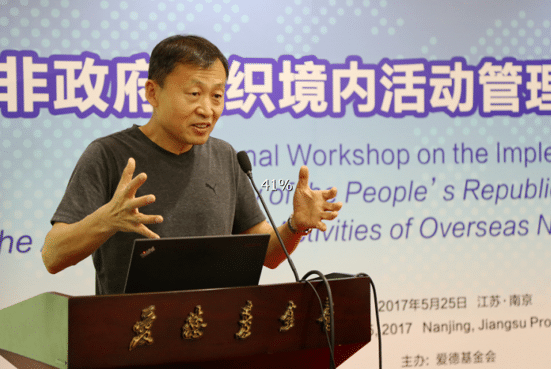 Wang Ming, the director of the Philanthropic Research Institute of Tsinghua University, spoke as a representative of academic institutions. Wang reflected upon the Charity Law, the Overseas NGO Law and the General Provisions of Civil Law from the perspective of the foundational regulatory structure for social organizations and nonprofits. The Overseas NGO Law in particular, as an independent and specialized law, is an important piece of legislation for the development of the rule of law in China, and is a landmark for China’s management of overseas NGOs. He suggested the government dedicate more efforts to areas including developing innovative mechanisms of implementation, specifying legal provisions, making policy more humane and user-friendly, adopting flexible and pragmatic mechanisms and engaging in more dialogue and communication with stakeholders. He advocates for more collaboration among government departments and more research in order to promote the rule of law in the management of overseas NGOs in China.