The following is an abridged and adapted translation of an article produced by the SEE Foundation (阿拉善) and published by the China Social Enterprise and Social Investment Forum (秘书处所在地 社会企业与影响力投资论坛). It describes various social responsibility projects undertaken by steel manufacturing company Delong Holdings. The article focuses particularly on Delong’s industrial zone, in Xingtai, Hebei Province, which has now been turned into a tourist attraction with 215 Transformers statues made out of scrap steel.

Delong Steel is one of China’s top 500 manufacturers. It has factories in Xingtai, Baoding, and other cities which are all among the most polluted in the country. Attention tends to focus on the steel industry every winter, as the air pollution intensifies. Some people have even directly approached Zhiguo Ding, the chairman of Delong Steel, in public and asked him “how much impact does your company have on environmental pollution?” or “do you feel guilty for creating pollution?”. Every time, Zhiguo Ding replies confidently “have a look at my factories and you’ll find it out.”

In 2004, a storm of environmental protection swept the country. Delong Steel faced compulsory relocation if it failed to upgrade or transform. At that point, Ding started his global tour of investigation to seek for the most suitable environmental protection technologies for Delong. Nowadays Delong Steel is fully committed to industrial transformation, with a daily investment of one million yuan.

Since 2012, Delong has invested over two billion yuan in total on environmental protection, and has implemented over 50 in-depth environmental protection projects. For example, the storehouses were turned into totally enclosed ones to prevent dust from scattering. The world’s largest PE film closed material field was built by Delong. In 2017, the company imported advanced equipment for steam discharge treatment in order to realize “zero emissions”. At first, they chose a relatively inexpensive producer with a high efficacy of 90%, but Ding still insisted to enhance the efficacy to 100%, even though the cost would increase from 7 million yuan to 30 million.

Furthermore, Delong started its sewage treatment project in 2005. After three phrases of upgrading, it has successfully achieved a complete recycling of wastewater. The treated wastewater is actually able to reach the national standards for drinking water. Moreover, the great amount of heat produced during manufacturing was transformed to supply the heating for over 2.7 million square meters for the city. The remaining steam and coal gas were used to generate electricity with an efficiency of 70%. All of the vehicles in the factory areas were also replaced by LNG new energy cars, almost eliminating exhaust emissions.

But Delong’s most remarkable environmental protection achievement must be the reconstruction of its industrial zone. Perfectly combined with the bamboo and willow forest, the factory is now more like a large park when looked at from a distant place. Modern steel mills, artistic buildings, widespread statues, and museums have all brought Delong’s old industrial zone vigour and vitality. Specifically, scrap steel and waste parts were reused to make 215 Transformers statues, which set a world record. These Transformers all have different sizes and appearances, and each one of them is endowed with a unique background story.

After many years’ of accumulated efforts, the dirty and messy factory has successfully become a 3A-grade scenic spot. Just from January to April 2019 Delong Steel attracted over 40,000 individual visits, with the Transformers park especially praised by the public. 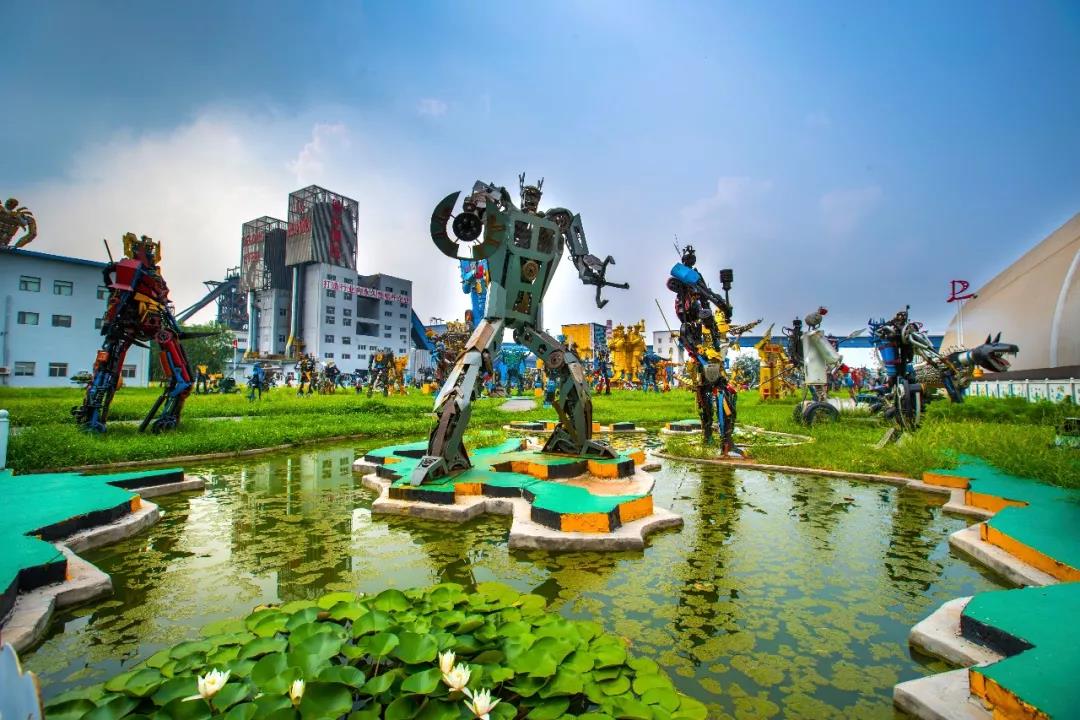 Some of the statues on display at the Delong Industrial Zone