Nonprofits show off programmes at Children and Women Industry Expo

The 2021 Children and Women Industry Expo took place in Beijing from July 9 to 11. Attracting women and children from across the country, the annual event aims to create a platform to bridge collaboration gaps between the government, private sector, social organisations and the public. 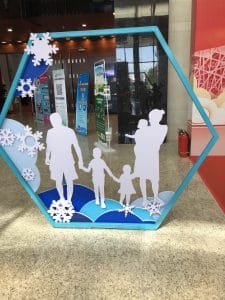 Just as in previous years, this edition featured a section specifically set up for nonprofit organisations dedicated to serving women and children. Through exhibitions, forums, performances and children’s activities, the section aimed to help participants learn about the range of social services on offer and how to access them. CDB visited the expo on its opening day and talked to three local organisations about programmes they were promoting at the event and asked each of them what impact they hoped to have on the participants.

Ren Ai She Gong (RASG), a social work centre located in Beijing’s Changping District, promoted its waste-sorting programme to school-aged children at the expo. Groups of children were invited to take part in a game which tasked them with classifying waste and rewarded them for correct answers. “Generally speaking, children from Beijing have a good awareness of waste recycling,” said an RASG staff member, “and many of them can select the right bin to put items of garbage in.” 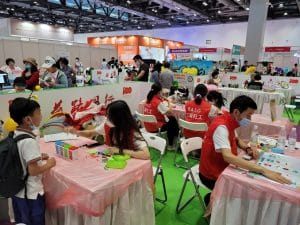 More than 300 children are thought to have taken part in the organisation’s programme on the first day of the event. But RASG’s initiatives don’t just target the young, the organisation has also introduced waste-sorting programmes to neighbourhoods in Beijing, inviting children, parents and the elderly to participate in DIY activities, such as designing shopping bags, and promoting a more eco-friendly lifestyle.

CDB also talked to the Burns and Scalds Care Foundation (BSCF) affiliated to the China Social Welfare Foundation. In 2016, BSCF in collaboration with Beijing Aiwuhen Burns and Scalds Rehabilitation Centre, initiated the Education Programme of Prevention of Burns and Scalds targeting all age groups. At this year’s expo, BSCF organised a series of activities guided by volunteers to help children and parents identify objects at home that could potentially cause burns and scalds, with participants also taught what to do when injuries occur. “We set up a maze of household cupboards in the venue so that children could walk through and see the pictures of household items we had stuck on the cupboards. It is designed to teach them about items that can be dangerous,” said one programme officer from BSCF. “After learning about burns and scalds, each child will then be invited to stand on a little stage and make a speech about what they have learnt today. We hope this can help children remember some of the dos and don’ts.” Staff members also told CDB that sometimes, they take the cupboard tube maze to schools and shopping centres so that more children can have a go at the game and learn how to protect themselves from injury. “Burns and scalds should not be overlooked,” one of the BSCF volunteers said. “Each year over 26 million people in China suffer burn injuries that require medical attention. Many of them are women and children. It is a shocking statistic and we are here to do something to help.” 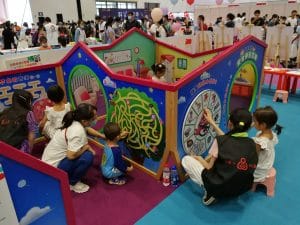 Beijing Women & Children Development Foundation (BWCDF) is another nonprofit organisation that attended the expo. One of the programmes that BWCDF promoted was their emergency response course, which is taught to children using virtual reality (VR) technology. BWCDF believes that in modern, densely populated cities like Beijing, fire, earthquakes and safety hazards at home are all potential threats to children’s health that demand the provision of emergency response training. Recognising that children are easily attracted to visual information, the organization believes that VR technology can help children cultivate their skills in safe and controlled visual settings, allowing them to explore various environments and scenarios. Parents are also able to join their children and identify safety hazards they might not have noticed before.

The Children and Women Industry Expo was first held in 2019 in line with the national policy of “stimulating domestic demand and improving people’s livelihood[1]”. Held annually, the expo reportedly attracts over 50,000 families every year[2].