A national quantitative survey of the Chinese transgender population, with the largest sample size to date, has been published by a Beijing LGBT organization. The National Survey of the Transgender and Gender Non-Conforming Population in China was released to the public on the Transgender Day of Remembrance, November 20, at the Embassy of the Netherlands in Beijing. The survey was initiated by the Beijing LGBT Center and the Department of Sociology of Peking University, with support from the Dutch embassy. The published report is not only a pioneering academic research but also a channel for Chinese trans people to make their voices heard. 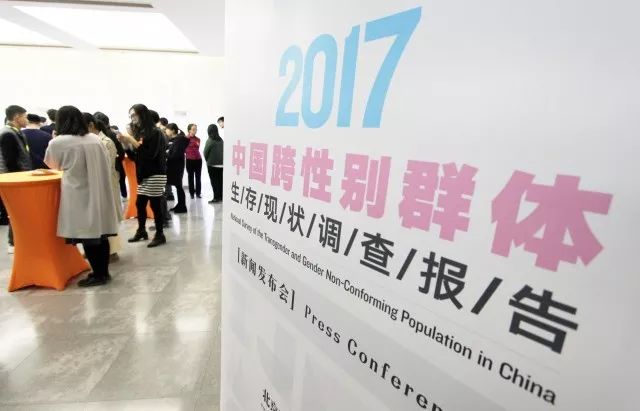 During the press conference, Dutch ambassador Ed Kronenburg and a representative of the United Nations Development Programme (UNDP), Yang Zhen, gave speeches and showed their attention and support to the trans population in China. Also, as the main sponsor of the program, the Beijing LGBT Center’s executive director Xin Ying and the supervisor of their transgender program Kelly both gave impromptu speeches. Many LGBT organizations, well-known media outlets, academic groups and others who care about LGBT issues were seen in attendance. Additionally, several transgender individuals performed some highlights of a play related to the trans population.

After the press conference, there was a panel discussion in which many people from the charity sector joined in and discussed trans issues from various perspectives. Several guests expressed their opinions on possible methods for improving the social visibility of trans people.

The national survey was conducted in the form of an online questionnaire, which included questions relevant to the trans population’s basic information, medical environment, school and work, psychological health and services, and policy needs. For a long time, the trans population has been seen as a somewhat mysterious group by society, and many people mistake being transgender as an issue of sexual orientation. In fact, the term transgender refers to people whose gender identity or expression is different from their biological sex. As defined in the report, there are three types of transgender: transgender men, transgender women and genderqueer (referring to people whose gender identity does not conform to the gender binary).

Trans people are often not accepted or even seen as perverted by the public, and many of them suffer from domestic violence, campus bullying and other kinds of social discrimination. The report reveals that 80% of transgender people experience gender dysphoria, and the overall transgender population bears tremendous stresses in life. Among the 2,060 valid respondents, 61.5% experience depression, 73.2% have anxiety, 46.2% have considered suicide as a result of being transgender, and 12.7% have attempted to commit it. Furthermore, the report shows that there are low levels of support and a low degree of acceptance for trans people by their families of birth. Almost 90% of families cannot completely accept their trans children, and 59.7% of trans people reported that they received no support from their families. It can be seen from these figures how the current living environment of the trans population is truly worrisome.

Pipi, a transgender woman who helped design the survey questionnaire, talked to the Shanghai-based news website Sixth Tone at the event and stated that the report will help raise the visibility of trans issues. Pipi noted that there are two urgent problems for the trans population: “the first is understanding from family, and the other is adequate medical services” (see here for the Sixth Tone article). Pipi said that these two problems are related, and that if there were more trans-friendly health professionals who could help clarify the situation to the families, it would be easier to gain support from relatives. Pipi also mentioned that it is quite a meaningful change that China’s medical guidelines no longer call transgender surgeries “sex changes”; instead, the guidelines now use the term “sex reassignment surgery”. However, the privacy protection and medical services offered to the trans population are still insufficient.