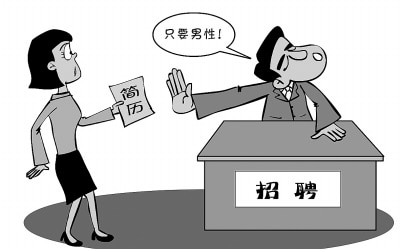 Zhang Yun, a fresh graduate from the Hunan University of Technology, is having trouble finding a job. She has decided to go to yet another Hunan Province job fair, in order to look for a job in Civil Engineering.

“When recruiting fresh graduates, many employers want male students rather than female ones. They think a woman’s work efficiency is more likely to be influenced by pregnancies and paternity leaves,” explains Zhang Yun. If she fails to find a job again, Zhang has decided she will go back to school and take part in the entrance examination for postgraduate studies.

Liu Xing, from Hunan University, faces the same dilemma. “Do you have a boyfriend? When are you ready to get married and have a baby? These are the two questions they ask me the most”. Although she knows it is unfair, Liu feels there is nothing she can do about it.

Unfortunately Zhang and Liu are not alone in their troubles. According to research conducted by the Women’s Studies Institute of China (WSIC) in 2015, 86.6% of female university students have experienced gender discrimination in employment, and over 80% of this group is made up of science and engineering majors. 80.2% of women think that preference is shown towards male employees.

Professor Luo thinks that employers also show a preference for men during interviews. Even when women excel in terms of education, work capability and eloquence, employers still tend to choose the men. Companies clearly stating “Men Only” or restricting the number of female staff means that female students need to devote more time and money than their male counterparts to achieve the same results. “Female university students also have to face workplaces offering equal work for less pay and little room for promotion”, remarked Professor Zhou Linan of Hunan Normal University.

In fact China has issued policies banning gender discrimination in employment and promoting equality. Male students still enjoy a certain privilege in practice, however. According to Hunan University professor and department of education startup consultant Shi Hexun, the main reasons for this include a traditional mindset, a lack of capability among female university students themselves, the improper setting of school curriculums and the imperfection of the relevant laws.