Hope on the streets: one man’s mission to help Shanghai’s homeless (part l)

The following is the first part of an interview conducted with the founder of an organization that helps the homeless in Shanghai. All names used in this article have been changed at the request of the organization.

The past couple of decades have seen increasing numbers of foreigners coming to China for work or study, enticed by the country’s booming economy and numerous opportunities. While some might find their life taking an unexpected path in the Middle Kingdom, it’s a fair bet that most won’t end up opening a pioneering center for the homeless.

It’s reasonably common to see homeless people on the streets of big cities in Europe and North America, but the problem is not so visible in China. For those without somewhere to stay at night, there are sometimes government-run shelters where they can go. However, some have good reasons not to seek help.

David, 47, initially came to China to study Chinese at Shanghai’s East China Normal University. There, the Dallas-born American became active in a local English corner where he spoke to other attendees about his experiences of volunteering at a youth shelter back in the United States. Curious about what services were available for homeless people locally — but lacking the Chinese to do the research himself, David asked some friends for help.

His curiosity and passion for helping people took him on a journey that eventually resulted in the founding of the New Start Center in 2008. With the support of a local chamber of commerce, David was able to offer homeless people somewhere to get a hot meal, have a shower, do some laundry, and even pick up new clothes if needed.

He says it was seeing the plight of young men living on the streets that really motivated him to start the center.

“Looking at these guys, I’d think they’re great and have so much life potential,” he says.

Currently, the center is open three times a week, with one day reserved solely for women – although most who visit are men. Over the years there has been the occasional unaccompanied minor. 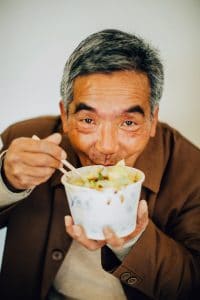 Homelessness is complex and the reasons for living on the streets vary enormously, but there are some clear trends among those who use the center.

“Generally they’ll be from a poor family; maybe mum or dad passed away, or perhaps both. Or maybe there was a difficult divorce. Children may have been passed around to different family members. Not feeling safe at home is definitely a common thread.”

Most of the center’s users are literate, although few have had anything more than an elementary education. Generally they were born in small towns and villages, although there are also users from big cities.

“For most, it is not simply an economic situation,” explains David. “And in China these days, it is perfectly possible to find a job.”

The reasons for living on the streets often run much deeper.

“There’s definitely some who have been jaded by bad experiences … abusive owners and managers of factories, noodle shops. Small businesses that were kind of taking advantage of them, and they’ve run away as a result.”

It might seem that there is little to stop a homeless person in Shanghai from simply using the services provided at the drop-in center, cleaning themselves up and finding a new job. But it is often not that simple.

“Typically, someone on the street doesn’t have the social or mental capacity to hold down a job,” says David.

Luckily, his organization can offer additional support: a unique residential training program designed to provide people with the skills they need to get back on their feet, and ultimately into employment. Situated a few kilometers from the drop-in center, the 400-square-meter facility serves as a home for those deemed suitable for the New Start Center’s training program and even boasts its own gym and garden.

“It’s invitation-only basically,” says David, explaining how people can join the program. “We want to make sure that if someone starts our training program we can get them through it and into a job. What we don’t want is to create a state of dependency on us because it just isn’t sustainable.”

Identifying those who may be suitable to join the program starts at the drop-in center.

“The first step might be getting them involved as a volunteer. We might ask them for assistance with cleaning the center or doing laundry. There’s always a lot of work to do. We might start to pay them a small stipend for their work,” he explains.

But helping out at the drop-in center does not automatically lead to an invitation to join the residential program.

“Next we evaluate their work and see how they respond to feedback. We try to learn more about their family situation and ask them about any previous employment. We really try to understand why they’re on the street.”

If a person seems appropriate, they might be invited to visit the residential center as a guest, perhaps to join the other residents for a meal to see how they get on.

“We try to take it really slowly when it comes to allowing people into the residential center because we want to be confident that we’re setting people up for success, not failure.”

Once someone is accepted onto the program, they are assigned a trainer who acts as a mentor while they complete various tasks in the drop-in center.

“We take a very hands-on, individualized approach to training,” says David. “And when someone’s scheduled to be working, they’re working six days a week from 8:30 am to 5:30 pm with a very clear set of responsibilities. Jobs might include helping prepare meals or even walking the center’s dog. As we observe them, we learn where they need help. Generally we find that the people we work with lack soft skills, particularly around handling conflict and feedback.”