“Home, Spring & Autumn” selected as one of the “Top Ten Chinese Documentary Promoters”

The Home,Spring & Autumn Oral History Project (the name is a reference to the famous “Torrents trilogy” by Ba Jin) was awarded as one of the “Top Ten Chinese Documentary Promoters” at the Guangzhou International Documentary Film Festival on December 15th, 2016. The Project was initiated by the Beijing Yongyuan Foundation, and supported by the Zhejiang Dunhe Foundation, the Cui Yongyuan Oral History Research Center at Communication University of China, and the China Social Assistance Foundation. The Publicity Department of the Communist Party of China Xue Xi Press, the CCTV Film Channel, the Companion Culture Foundation and Jiangsu TV were among the other winners of the awards. 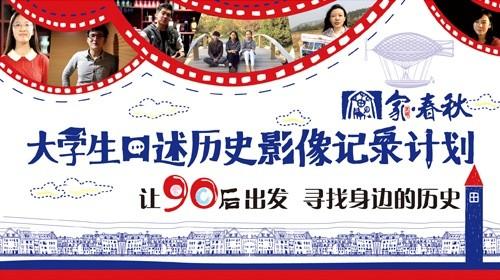 Cui Yongyuan, the initiator of the project, sent a video message to express his congratulations. As an enthusiast of oral history research and practice, Mr. Cui always encourages more people to participate in recording oral history.

Ms. Qu said he felt “surprised, although it was not completely unexpected”, that Home, Spring & Autumn oral history received this acknowledgement and praise from the judges. The documentary is not only an oral history project, but also a historical and cultural charity project, aimed at raising public awareness of oral history and inviting more people to contribute to it. By spreading the project, more young people will be encouraged to save their history.

The first two seasons of Home, Spring & Autumn covered 35 cities, 167 universities and 1,200 people, and produced more than 300 works, with the involvement of more than 50 oral history experts and documentary directors. Season three of the project is now in progress, and a campaign entitled “let’s record oral history together” will also be launched.