Editor’s note: This article was submitted to China Development Brief by China House.

Wang Shui has been married to Yi Bingjin, a pneumoconiosis patient, for decades. In 2009 she decided she had to leave the family home and find work in the nearby city of Dongguan. It was the only way to support her family, who were struggling to pay her husband’s medical expenses. However, with Wang out of the house there was nobody to take care of the couple’s two kids or take Yi to hospital if he suffered respiratory failure.

Faced with these concerns, Yi tried to convince his wife to stay, but she was determined to leave, arguing that they wouldn’t even be able to afford food if she didn’t.

Wang faced two conflicting obligations: taking care of her husband and struggling to support her family, putting her under tremendous pressure.

On-site interviews reveal that such dilemmas are common among the wives of pneumoconiosis patients. Their conflicting obligations cause tremendous stress, with many suffering in silence.

Pneumoconiosis is a lung disease caused by the inhalation of dust. In severe cases the disease can force people to give up work. Consequently, women often bear the burden of caregiving and supporting the family, causing enormous financial and emotional strain.

She who hides behind her husband’s name

In the village of Cangxia, Jiangxi Province, a modest ancestral temple can be found. It seems more suitable for casual activities than traditional rituals. The wives of pneumoconiosis patients regularly gather here, and through them, a group called Support for Pneumoconiosis Wives has formed. 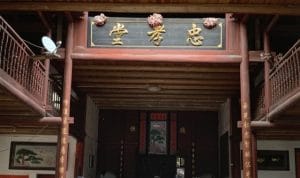 “Xie Baoliang!” says a voice inside the temple.

The coordinator of the group is checking the participants in one by one, but nobody responds to this name.

Finally, a middle-aged woman walks up hesitantly, carrying a child in her arms.

“Why did you write your husband’s name on the book? From now on, please write your own.”

The woman, who is Wang Shui, smiles without responding. Other women have also used their husbands’ names instead of their own.

In rural parts of China, traditional family roles are deeply imbedded, which creates lifelong constraints for women and puts a husband firmly in charge of his household. The incident in the temple may be explained by this societal norm.

Subconsciously, Xie Chunjuan believes that her husband ought to be the “captain of the ship”. That’s why she lets him make all the decisions and puts up with his negativity.

“Although my husband is very ill, I don’t even think of calling the shots at home. Challenging my husband’s power; that’s simply unthinkable! Around here, it’s always the husbands who are in charge. I’m a good-for-nothing just sitting around,” she says.

The volunteers discover that, like many other female carers, she doesn’t know much about the support group and only comes when aid packages are given out. When asked about her marital relationship, Xie says: “When he gets sick and takes it out on me, I have to put up with it. He’s the patient. If I can’t even deal with that, what sort of wife am I? Right?”

Is it really right that women should bear this burden?

Li Jianli is one of the few women out of a dozen who’ve filled out their own names. Boasting a youthful and vibrant character, she’s also rather fashionably dressed. Her features seem to outshine those of the other women. She has her own hobbies; playing cards in the ancestral temple is among her favorite pastimes. She makes her own schedule, which includes a daily morning run. She is well-respected by her husband, who never imposes himself on her, choosing to pay for carers instead. She values her two daughters deeply, so she supports both of them and encourages them to study and plan their own lives. Li says that she does what she can to take care of her husband but never forces herself to do something she can’t manage.

Either out of their own volition or because they simply have no choice, many wives of pneumoconiosis patients ignore the stigma of working outside the home and head for the big cities to find jobs in the service sector.

The changes are not all positive: as wives leave home, they embark on a solo struggle for survival in a cutthroat urban environment, receiving little support from their husbands while they do so, which can eventually fuel conflict.

When a female caregiver decides to work outside the home, she gets a new identity as a member of the workforce, one that conflicts with her role as a housewife. This can cause problems in the families of pneumoconiosis patients.

Xiao Li, the local manager of the NGO Xingjian Gongyi, believes that when wives work in the cities, their husbands get left at home without a caregiver. Husbands want their wives to stay home, but then the family loses its source of income and struggles to survive.

The central conflict between caring for sick relatives at home and working outside lies in the fact that in the current market system, the domestic labor that housewives do is not considered productive. Under a neoclassical framework for the market economy, domestic labor is not assigned any economic value whatsoever, hence the lack of income (Cui, 2008, pp. 26).

With the assistance of NGOs like Xingjian Gongyi and Love Save Pneumoconiosis, some female caregivers have started their own businesses at home, selling homemade snacks or craft products through Tik Tok. Xiao says that in the beginning, some women saw such work as being simply part of a mundane daily routine.

“We can’t sell them for much, and it disgraces the family to do so,” says one woman who makes products at home to sell online.

However, with the help of NGOs and internet platforms, some women have been able to earn a reasonable income through their work. One woman makes 3000-5000 yuan ($450-$800) per month just by selling her homemade snacks online, giving her enough to cover everyday expenses for her family.

When a woman is able to earn money from her own home, she is able to stay with her husband. Xiao argues that women who provide for their husbands while still living with them usually enjoy a higher status within the family. Although they both make money, stay-at-home entrepreneurs have a bigger say than those who work outside because they can be there for their husbands in addition to supporting the family.

However, there are still plenty of problems: caring for a relative still generates no income. However, income earned from selling snacks and other products serves as a partial remedy and provides the prospect of achieving a better balance.

In recent years, Rural Renaissance has become a government priority, encompassing the overall goal of eradicating poverty. A local official from the village of Guanshang believes that entrepreneurship is absolutely key to this: “The government can give you 100K or 200K in cash, but that’s not sustainable. Give or take a few years, and you’ll run out of it.” He points out that women are actively participating in Rural Renaissance: in his village, many exemplary entrepreneurs are female.

In conclusion, NGOs provide a unique remedy to the long-standing conflict between staying at home to care for sick relatives and working outside to earn a living. With ingenuity and diligence, women can transform the shackles of outdated societal norms into a source of income, achieving a balance between caregiving and financial support. Generating income from businesses based at home empowers female caregivers and serves as a potent boost to the economic resilience of pneumoconiosis families.