With the support of the Beijing Hongdao Charity Foundation’s “Don’t Let Go of the Hands” (爱不释手) project, a little girl named Shiyuan, who suffered from a congenital deformity of her right hand, underwent a successful operation in Beijing’s Jishuitan Hospital on September 19, 2016. When Shiyuan’s gauze was removed, seeing her rehabilitated right hand her family burst into tears. 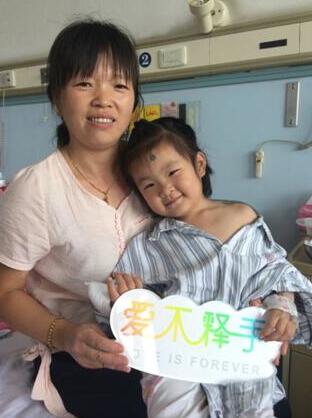 When Shiyuan was born, she was found to be suffering from hexadactylia on her right hand (in other words, she was born with six fingers). Shiyuan’s family decided to put off the operation to remove the additional finger until she was a little older.

When Shiyuan turned four, she became very self-conscious about her deformity. This was when she had her first surgery. However, the operation was not very successful: even though the additional finger was removed, the finger that was next to it could not function because the tendon had been removed. Shiyuan’s mother was very distressed as the family’s lifeline, crop harvesting, was also affected by severe flooding from a typhoon in 2016. Not only they couldn’t afford a second operation for Shiyuan, but the family’s whole livelihood was at risk.

Fortunately, the Beijing Hongdao Charity Foundation (“Hongdao”) found out about Shiyuan’s story. Realizing that helping children with congenital hand malformations is an area urgently in need of attention in China and seeing that no other organizations are targeting these children, Hongdao immediately launched the “Don’t Let Go of the Hands” project to support treatment for children up to 12 from low-income families who suffer from congenital hand malformations.

There are few reports on this kind of disease in China. According to a survey of the birth records of 350,000 newborn babies in Shanghai, the occurrence of hand or upper arm congenital malformations is 0.85%. Accordingly, the population suffering from congenital hand malformations is estimated to be around 100,000.

The “Don’t Let Go of the Hands” project has received attention and support from Beijing’s Jishuitan Hospital and the Hand Surgery Branch of the Beijing Medical Association as well as from many celebrities. Discussions on establishing a cooperative mechanism and building a comprehensive aid system are underway.