We are pleased to report that China Development Brief’s third forum for overseas NGOs was successfully held in Beijing on the 6th and 7th of November. Entitled “China’s Overseas NGO Law Two Years On”, the forum attracted an audience of over 100 people, mostly representatives of overseas NGOs that work or intend to work in China, as well as academics, embassy staff and journalists. The two-day event featured talks, panel discussions and Q&A sessions. The main focus was the administrative and operational challenges that overseas NGOs face while working under the new legal framework. CDB hosted two similar events in 2017, focusing more specifically on the registration procedures for overseas NGOs, but this year’s forum was the largest and most ambitious one yet hosted.

The forum was opened by Ray Zhang, CDB’s general director, who spoke about the event’s background and purpose. “The Law on the Management of the Activities of Overseas NGOs in Mainland China, first implemented on the 1st of January 2017, has been a milestone for China’s charity sector”, said Mr. Zhang. “This law has made up for the problem of overseas NGOs not having any legal cover”. 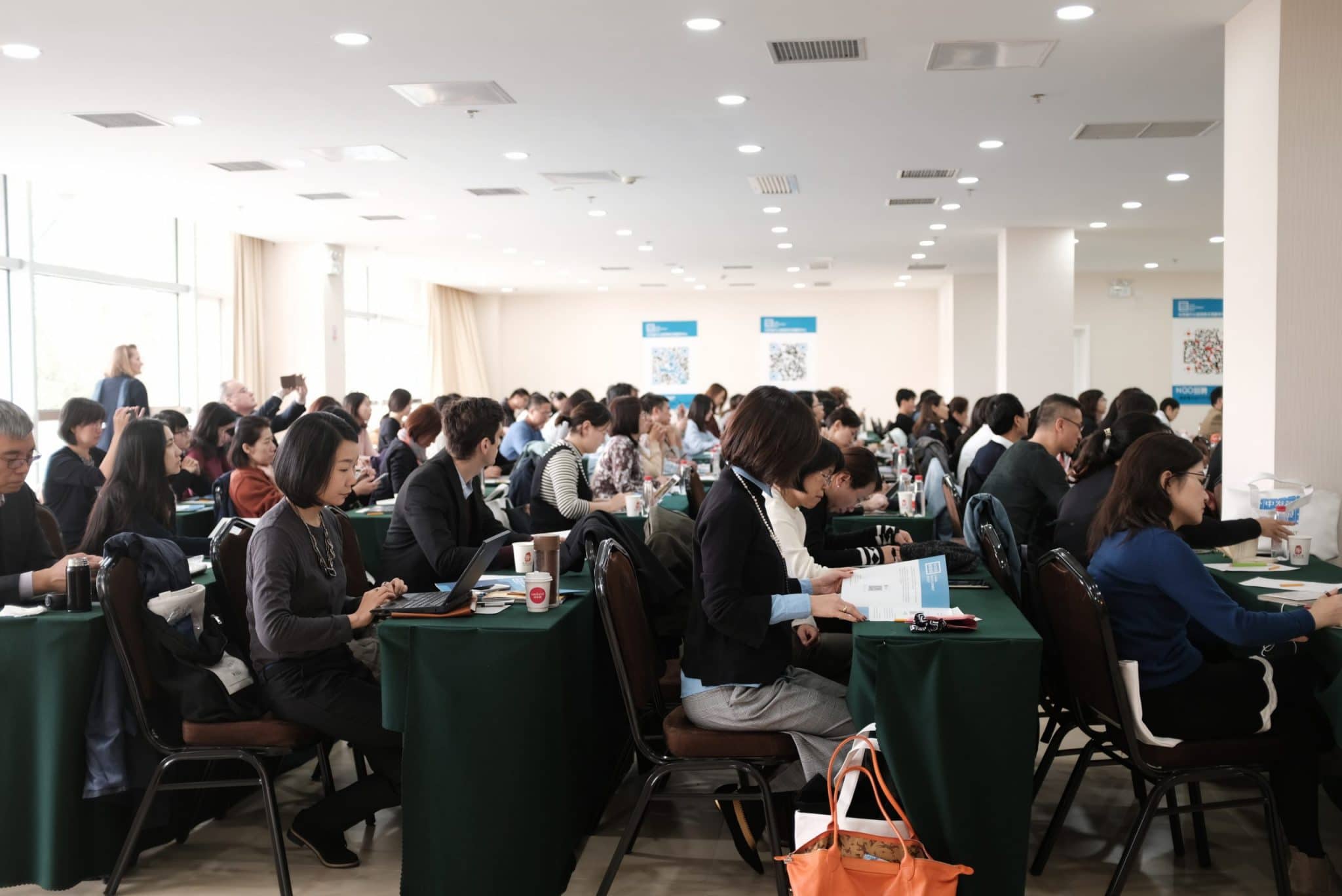 The first talk was by Prof. Jia Xijin, associate professor at the School of Public Administration of Tsinghua University and deputy director of the Tsinghua NGO Research Institute, who shared her thoughts on the current situation and future prospects of overseas organizations in China. In her talk, Prof. Jia gave an overview of the situation for overseas NGOs over the last two years since the new law was passed, and based on the existing data, presented a convincing analysis of the future registration trends, development direction and difficulties for overseas NGOs. As she explained, by November 4, 2018, 427 representative offices of overseas NGOs had been officially registered in China, and 1,179 temporary activities had been filed. Compared with 2017 there were far more temporary activities filed in 2018, while the growth in the number of registrations remained relatively flat.

Later on, the chief representatives of the Ford Foundation, Oxfam Hong Kong, Save the Children, and the World Resources Institute talked about their respective organizations’ current operations in China. Elizabeth Knup, the long-serving country director of the Ford Foundation, gave her talk directly in Chinese, attracting an enthusiastic response and many questions from the participants. As Ms. Knup said: “The Ford Foundation has been in China for 30 years, and we have been devoted to serving China’s opening up and reform, as well as China’s development. In the future, the foundation will help more Chinese companies and organizations to go out and engage in international affairs, following the increase in the efforts to open up.” When asked about how the Ford Foundation manages to maintain its work‘s flexibility while fulfilling the new law’s requirement to present an annual work plan, Ms. Knup replied “I think that with the new law, that’s what the current operating environment is like, it’s something that we cannot change. Therefore, all we can do is change the way that we work.” 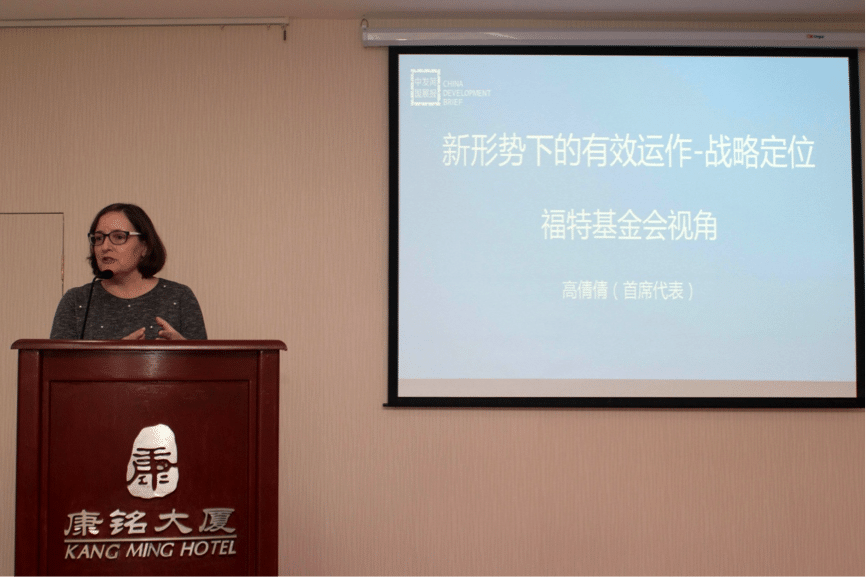 Elizabeth Knup, from the Ford Foundation, giving her talk

In the afternoon, the first panel discussion was hosted by Wu Peng, the director of the international development department of the China Foundation for Poverty Alleviation. The discussion was focused on “how overseas NGOs can help local NGOs work abroad”. Yang Hongping, the assistant to the secretary-general of CANGO, said that the problems for Chinese NGOs wanting to “go out” and work abroad are to be found in three aspects: capacity building, resource acquisition, especially human resources, and the construction of a cooperation network.

Fang Hui, the project officer of the Asia Foundation, shared her experience: “on the one hand, we should improve our own skills, and respond to more international disasters and humanitarian relief; on the other hand, we should host seminars on international development cooperation to exchange advanced experiences. Furthermore, in terms of tools, we should develop “going out” manuals with other foundations to offer assistance to Chinese NGOs.” Wang Yalin, from the UNDP, claimed that she believes that “going out” is a process of interaction. The difficulty Chinese NGOs feel in operating abroad can be tackled by conducting a capacity survey, understanding the demands, and setting up platforms to help local NGOs go out.

The second panel discussion was on the topic of “how international NGOs can maintain partnerships under the new law”. Guests from The Nature Conservancy, Oxfam Hong Kong and Partnerships for Community Development shared their experience regarding how to strengthen communication with the supervisory departments, the specific operations for cross-provincial and cross-sector cooperation projects, and the difficulties and challenges of cooperating with the relevant government departments. 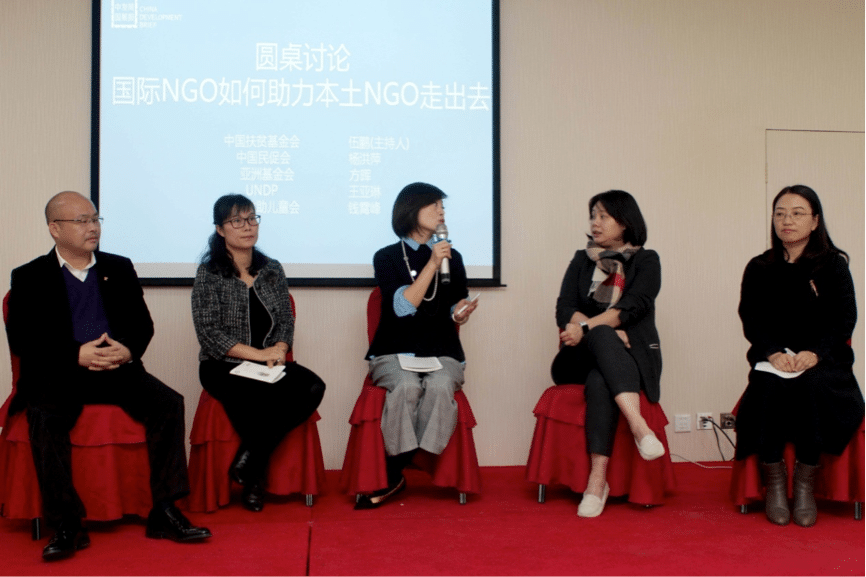 The panel discussion on Chinese NGOs “going out”

The second day of the forum opened with a talk by a guest speaker from the PSB. Zhang Penglin, an officer of the NGO administration office of the Beijing PSB, gave an extremely detailed rundown of the requirements for registering overseas NGOs, filing for temporary activities, and presenting the annual activity plan and work report, based on the practical problems that have been encountered over the last two years. After his talk, Mr. Zhang answered the questions raised by the audience and provided practical solutions where possible.

Later in the morning Zhao Daxing, the secretary-general of CANGO, shared his experience of filing temporary activities, and Li Yan, the chief representative of Greenpeace, spoke about her organization’s “operations during the registration transition period”. Ms. Li explained how the well-known environmental NGO is still in the process of trying to register a representative office, so in the meantime they are operating their projects in the form of “temporary activities”. She stressed the importance of cooperating with local partners to realize the different projects, while revealing that on occasion Greenpeace has unfortunately had to end their cooperation with organizations with whom they had cooperated for many years, because those organizations did not reach the legal requirements to serve as local partners.

In the afternoon, representatives from NRDC, the Asia Foundation, Project Hope and other organizations joined panel discussions concerning HR, finance issues and project management. During the Q&A sessions, participants exchanged ideas on issues like employee development planning, the employment of foreign staff, the donation of funds and so on. The heated atmosphere reflected the fact that, two years since the new law was implemented, overseas NGOs still face confusion and challenges over some of the requirements. 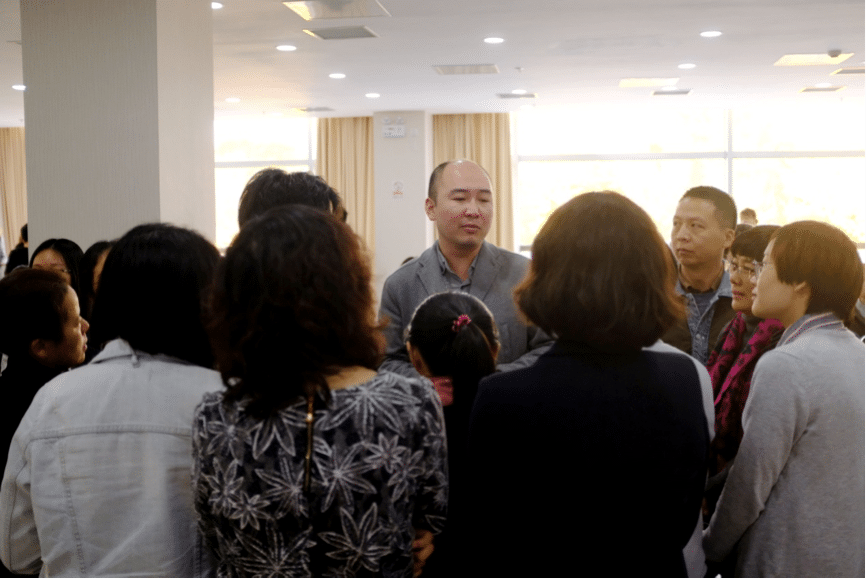 Mr. Zhang Penglin, from the Beijing PSB, is surrounded by attendants wishing to ask questions during the tea break

Liu Zhongliang (Peter Liu), CDB’s executive director, concluded by saying “I hope we can organize a CDB forum every year in the future. If everyone can communicate and share experiences, while at the same time seeing old friends and meeting new friends, this will have a positive impact on our work. Our organization will also do its best to continue hosting these forums”.

We will soon publish the translated transcripts of some of the forum’s most interesting talks on our website, for the benefit of those who could not attend but would still like to know more about what was said on the day.