CDB Forum 2020 | Kang Xiaoguang: NGOs Need to Figure out What They Can Do while Striving to Achieve Development in China or Abroad

Organized by China Development Brief (CDB), the CDB Forum 2020 was held in Beijing on the 9th of December focusing on “Challenges and Responses for Cross-Border Philanthropy under CoVID-19”.

In 2020, “quarantine” has undoubtedly become the No.1 buzzword, but the annual CDB Forum was fortunate enough to still be able to bring people in the nonprofit sector together. With enthusiasm and goodwill, the heads of INGOs, local NGOs and UN representative agencies in China, as well as experts from think tanks in the field of public interests met up, not only for organisations’ own survival and development, but also for the suffering of others, and for the well-being of the whole society. Altogether, they contemplated the challenges for and responses of the international philanthropy sector in the epidemic.

Throughout the forum, the participants spoke, listened to each other, asked questions, gave answers, reflected on the past year and thought of possible mutual actions in the foreseeable future. Experts and scholars from various sectors, and practitioners of philanthropy in China and abroad, brainstormed, exchanged ideas, and reflected on their own organisations’ development paths and the sector as a whole.

Kang Xiaoguang, President of China Institute for Philanthropy and Social Innovation, Renmin University of China, delivered a concluding speech for the forum. This article was compiled based on the speech and proofread by Kang for public release.

The full text is as follows: 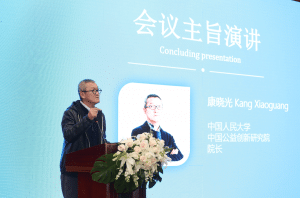 Many thanks to China Development Brief for inviting me to this forum. I was asked by the organizer to make a “concluding speech,, so I didn’t prepare my speech beforehand, and I dare not say that my speech will be “concluding.” Instead, I’d like to share with you what I have learned at today’s event and my thoughts on all the speeches the guest speakers delivered.

I think the topic of today’s forum, “Challenges and Responses for Cross-Border Philanthropy under COVID-19,” is a wonderful topic! When we talk about the COVID-19 epidemic nowadays, it is natural to think of the virus in the biological sense. But in reality, the “viruses” (serious problems in the sector and society) we are facing is in great number. The damage brought about by them may even be worse than COVID-19, both in China and around the world. In short, the “epidemic” in the broad sense is actually more damaging, and how to deal with it is a more serious issue for us.

NGOs should not only help others, but also help themselves

We always talk about how NGOs can do in disaster relief and generally helping others. The keynote presentation delivered by Elizabeth Knup has opened up another vision for us. She talked about a very important issue, namely that NGOs should not only help others in crisis, but also help themselves and the third sector as a whole go through the crisis, because NGOs are also victims of the pandemic. A previous study done by China Development Brief has fully revealed how badly the third sector itself has been hit. In such context, how to assist the third sector in the crisis has also become a very important task for the time being. In my opinion, the Ford Foundation has made numerous in-depth and valuable deliberations in this regard.

Ms. Knup mentioned the concept of “resilience” in her speech. “Resilience” refers to the ability of a person, an organization, or a sector to sustain itself and continue to function properly in the face of major external shocks. “Resilience” and its opposite, “vulnerability,” are the core concepts that help us think about strategies for disaster mitigation and prevention. During the pandemic, the Ford Foundation took many actions that helped reinforce the resilience of NGOs and the third sector. In the pandemic, the Ford Foundation offered that organizations receiving its grants could change their programme plans and that grant could be used to pay salaries, rent, etc., even if such payment was not in the original budget plan.

The Ford Foundation also creatively issued a billion-dollar public benefit bond to maximize public benefit spending in the most effective way at a time when it was most needed. Meanwhile, it has joined hundreds of organizations in concerted actions around the world. In this global fight against the pandemic, the Ford Foundation has demonstrated a sense of responsibility, a lofty vision, a high level of professionalism, and care and concern for its peers, that all of us – individuals and organisations in this sector should learn from them. Both practitioners and researchers should learn from not only the Ford Foundation’s professional practices, but also its stances and values. This is particularly significant. 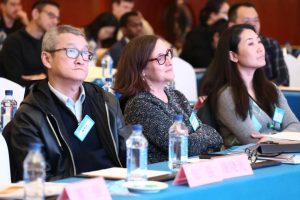 What exactly can we do, whether in China or abroad?

The theme of this forum today is about how international organizations can play a role in China on the one hand, and how Chinese NGOs can operate overseas on the other.

Whether in China or abroad, what we can do could be roughly divided into three categories: funding, service provision, and advocacy. Whether it is funding, service provision, or advocacy, whether it is international organization seeking to operate in China or Chinese organization going abroad, I believe that in the host areas, outsiders cannot become the “protagonists,” but the “supporting actors”.

In a huge country like China, it is impossible to effectively develop the philanthropy sector, whether through funding, service provision, or advocacy, by relying entirely on international NGOs. Chinese local NGOs should and will be take the leading role. In other words, it is impossible for overseas NGOs to play a major role in China through funding or providing specific services. For overseas NGOs to have meaningful impact in China, what they should do is primarily focus on promoting productive concepts, methods, and models. This may be the only entry point where overseas NGOs can have long-term, systemic impacts in China. Moreover, as China further develops, the share of overseas NGOs in the area of fund supply and service provision will continue to decline. In terms of concepts, theories, methods and models, however, there is still a great need for exchanges and complementarities between China and other countries.

If we take a brief review of the 20th century, particularly the history of NGOs’ transnational role in a global scale since World War I, we will realise that the NGOs that went overseas and made huge impacts were those that went abroad together with their nations’ global strategies. Only when a country’s economic, political and military power has become prominent and, more importantly, its values, lifestyles, and economic, social and political systems have become powerfully attractive to the outside world, can the country’s NGOs “truly” go abroad and “truly” make substantial impacts. The influence of NGOs in the outside world is not built up by money and labour, rather, it is by extending the soft power of their nations.

When a nation’s soft power is little, it will not be widely recognised in other countries and regions. When you are not recognised, everything you do seems of little significance to others, and you just “do a thankless job”. Therefore, for China, it is possible for certain NGOs to do some jobs overseas, such as sending a rescue team during an earthquake or sending relief parcels to poor children. However, it is impossible for them to go abroad in a large scale and make a huge difference in the rest of the world. This is a dream; a dream will not be realised within the coming ten or twenty years, because our soft power is not yet well-developed.

Besides, I am very much against using NGOs’ going abroad as a political tool. After going overseas, some Chinese companies did many inappropriate things and caused a lot of problems in the local areas, leading to dissatisfaction and opposition from the local communities, and then they wanted NGOs to help address their troubles. NGOs have neither the obligation nor the strength to clean up the mess caused by such companies. Instead, they should do well that what they are supposed to do. As long as they can focus on their responsibilities, that is already a great place to be in. 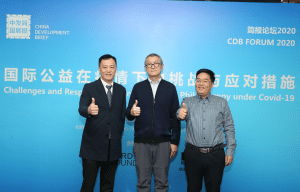 I believe that to achieve development, Chinese NGOs must have their own source of values and identify their own cultural roots. In the last decade or so, I have been stressing the need to build China’s third sector on the foundation of Chinese history and culture, and especially to integrate it with the Confucian culture, so that the most ancient core of Chinese culture can be truly revitalised and new cultures introduced from various countries can take root in China. Here, “returning to the origin” and “opening up the new” are complementary to each other.

I’d like to briefly introduce one of my reflections. The current theories of the third sector and civil society are based on the most basic value of “human rights”. Many people hold that traditional Chinese culture, particularly the Confucian culture, is incompatible with the concept of human rights. Many people accuse Confucian culture of failing to embody the concept of “rights.” That is a fact! To address this issue, we need to adjust our mindset and stop dwelling on whether the word “rights” is embodied in the works of Confucius 2,500 years ago. Rather, we should consider if he were alive today, whether Confucius would hold that modern Chinese people should enjoy human rights, based on his basic values and consistent ideas of governance.

The Confucian classic “The Great Learning” points out that the highest ideal for life  “consists in manifesting one’s bright virtue, consists in loving the people, and consists in striving for perfection”. How to realise these three principles? The answer is “studying deep into the root of matter, digging into the heart of fact to find the correct answer and knowledge, establishing sincerity, maintaining a true heart and getting away with evil thinking, developing our own self, thinking and behavior, keeping the family in a harmonious environment with proper respect to individuals, governing the country peacefully with education and good governmental policies, and ruling the whole world in a peaceful manner with good ruling policies.” For Confucianism, a qualified gentleman is not just a man who has done well for himself or his own family, but has a greater ambition to appropriately govern the country and the world. A gentleman must love and care for his family and country, and have a sense of responsibility for the world. A true gentleman should not only care for himself and his family, but also contribute to the country and the world.

Nowadays, if a person does not possess the basic civil and political rights, how can he govern and promote peace? How can he become a qualified gentleman? How can he give full play to his innate potential? Therefore, based on the consistent values and governance strategies of Confucianism, it can be inferred that if Confucius were alive today, he would certainly believe that in contemporary China, people should have full rights, otherwise people would not be able to reach the ideal human beings he had in mind. Therefore, our traditional culture is fully capable of holding the vision for rights, and can be effectively integrated with modern civilization, thus providing substantial cultural support for modern China and laying a solid foundation for China to be integrated with the rest of the world.