10 Years on from the Ban on Free Plastic Bags

On the 31st of May 2018, the Zero Waste Alliance(零废弃联盟), a civil society organization that has long concerned itself with waste issues in China, held a conference in Beijing to publish their newest research results on the effect of the “restriction on plastic bags” that was implemented in China 10 years ago. 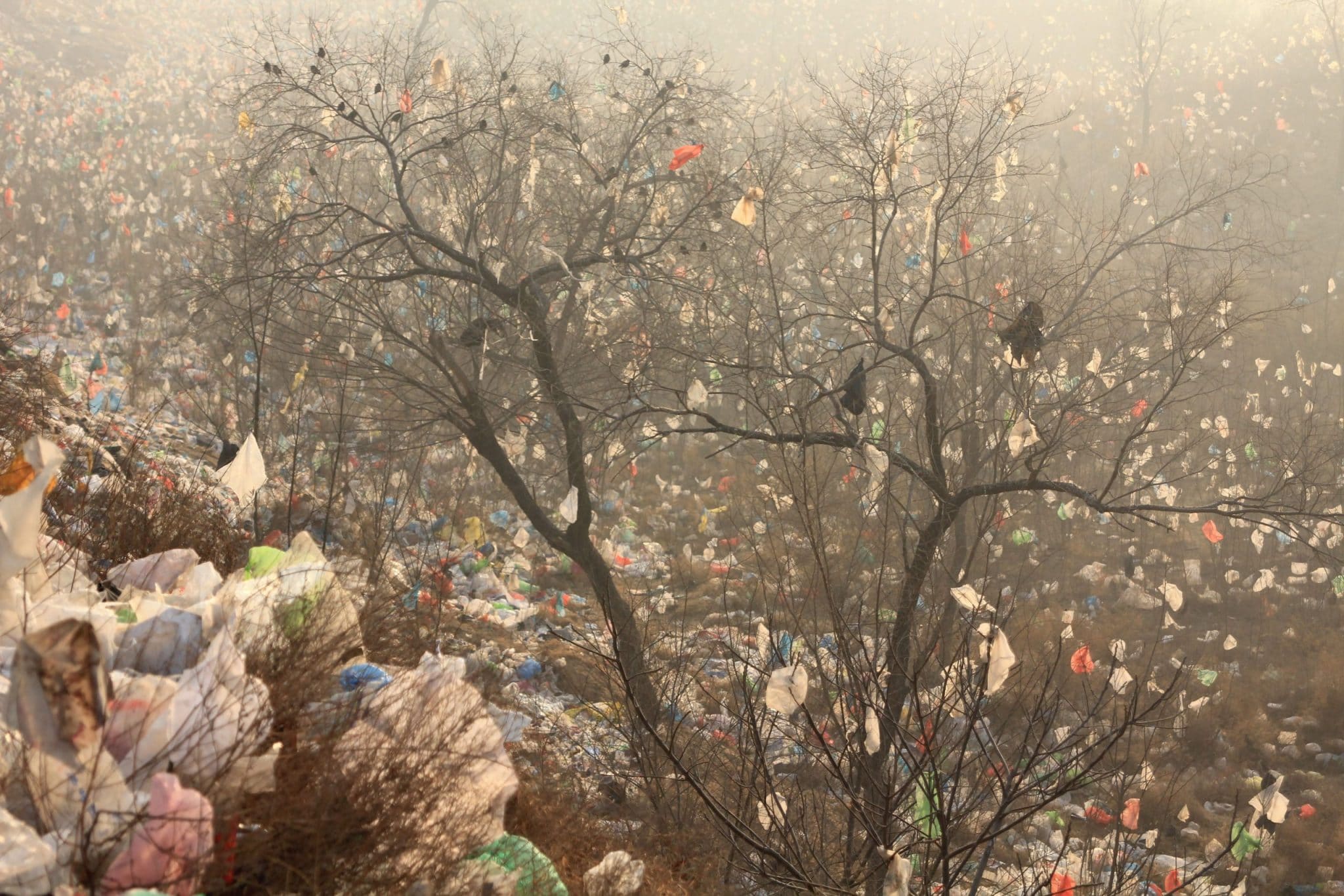 Photo by Wen Tianping. Taken in January 2011 at a dumping site in Xingtai.

On the 31st of December 2007, after considering the harm that disposable plastic bags do to the environment, on top of the fact that “super-thin plastic bags” create white pollution and are not easy to reuse due to how thin they are, the General Office of the State Council released the “General Office of the State Council’s declaration on limiting the production, sale and use of plastic shopping bags for retail purposes” (国务院办公厅关于限制生产销售使用塑料购物袋的通知), to be implemented from the 1st of June 2008. This declaration, and the laws and regulations that followed, introduced the following restrictions on the production and sale of disposable plastic bags: a ban on the production, retail and use of any plastic bag under the thickness of 0.025mm; a requirement that the bags have to carry a notice on them stating nine items, including the material the bag is made of, an environmental notice and the production unit; and a requirement to set up a system of payment for the provision of plastic bags in retail establishments.

In order to truly understand how the restrictions are being implemented on the ground in different areas, the Zero Waste Alliance teamed up with civil society organisations and volunteers in nine different cities to assess the situation in Beijing, Shenzhen, Shenyang, Hefei, Luoyang, Ningbo, Leping in Jiangxi, Rongxia in Sichuan and Fuyang in Anhui. They surveyed 1101 retailers, 979 of which provide plastic bags. 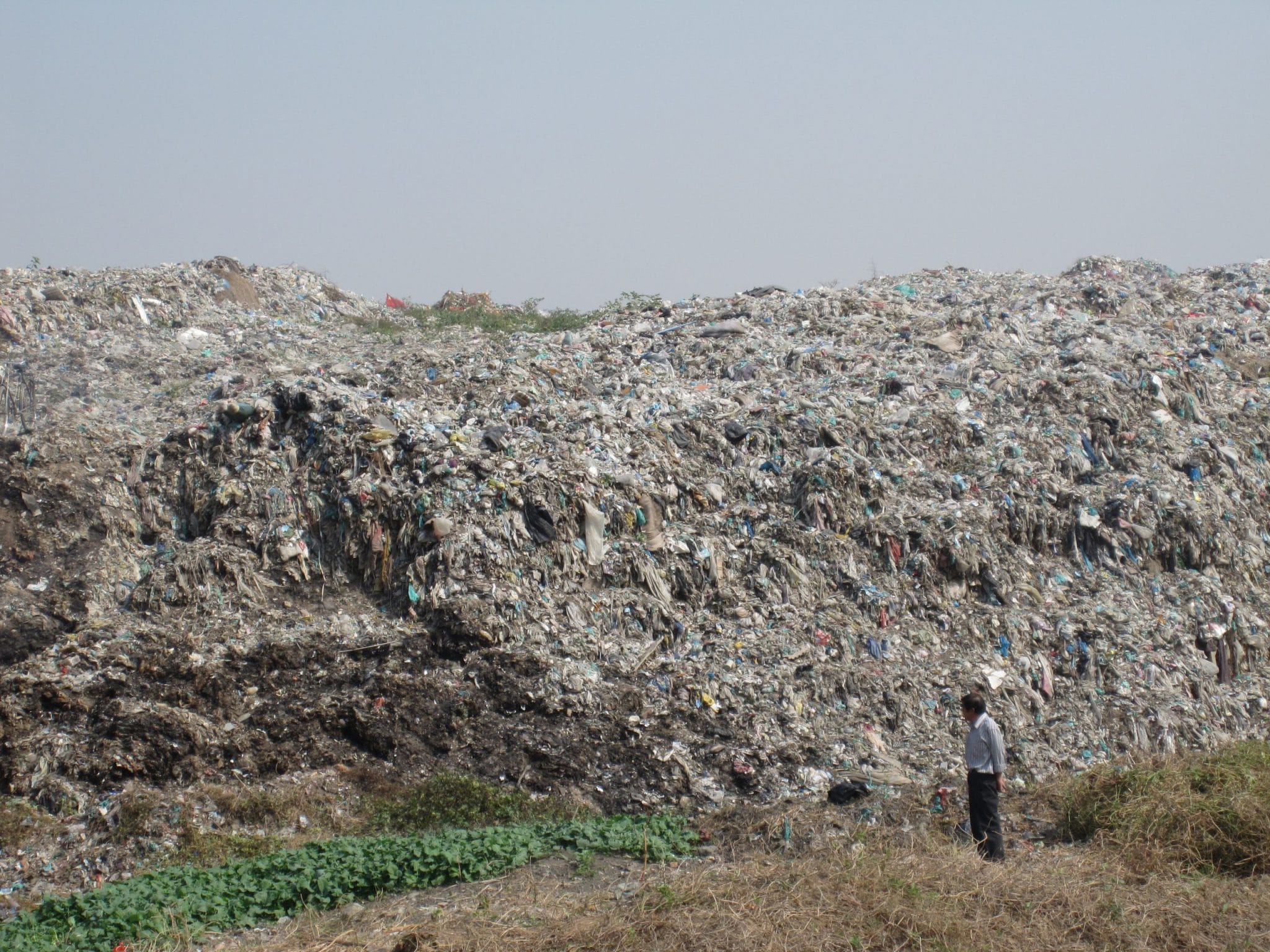 Photo by Zhang Huiying. A dumping site in Anhui in 2010, in which plastic has taken up a large proportion of the waste.

Out of the retailers that provide plastic bags, it was found that most violate the regulations and provide them without charge. The rate of charging for plastic bags was only 17%, and most of it was concentrated within large-scale supermarkets or nation-wide convenience store franchises; the rate for smaller shops was only around 10%. Furthermore, the proportion of retailers using plastic bags which do not conform to regulations stood at 78%. These include those that do not have notices on the bags or only have incomplete ones, and those whose bags are of a thickness that does not meet the standards. Only 89 shops, around 9.1% of the retailers surveyed, fulfilled all the requirements and charged for the plastic bags. On top of this only 36 retailers, 3.7% of the total, were able to achieve all three requirements for correct notices, correct thickness and charging for plastic bags, and also clearly state the charge for the plastic bag on the customers’ receipts, something which is also required to comply with the national restriction.

Further analysis of the research found that even though the rate of large supermarkets and convenience store franchises charging for plastic bags is comparatively high, these two types of store provide over 16% more disposable packaging, such as plastic films and bags for fruit and vegetables, than average. The Zero Waste Alliance policy director, Xie Xinyuan, says: “Large scale supermarkets and national convenience store franchises use a lot of other plastic wrapping to substitute for the restricted use of plastic bags, which is not in line with the original intention of the national restriction to reduce white pollution.”

Internet shopping and food delivery platforms gained momentum only after the release of the restrictions, and can be considered a grey area. Whether they should be subjected to the regulations is unclear. The report also looked at food delivery retailers and platforms, and taking 23 businesses that use plastic bags it was found that up to 96% of the bags they use do not comply with regulations. The main problem is that the notices on the bags were incomplete; furthermore, there was not one business that charged for plastic bags and added it to the customer’s receipt. If it is supposed to fall within the scope of the national restrictions, then the status of the food delivery industry is very worrying, not to mention the amount of plastic packaging they are also using everyday.

When it comes to notices on plastic bags not being in line with regulations, consumer knowledge is comparatively low and the fact that 78% of retailers do not comply is also worrying. Research has found that plastic bags without notices are often of low quality, posing safety risks and environmental hazards. The report also looks into online retailers of plastic bags, and it finds that nearly 80% of plastic bag retailers openly sell plastic bags without notices or plastic bags that do not comply with the standards; violations of the regulations by non-online plastic bag retailers are also common. “Even though these retailers obviously violate the national restrictions, the ‘product quality law’, the ‘requirements for disposable plastic bags for environment, safety and notices’ and other such laws and regulations, when volunteers report them to the online platforms, they will receive a reply simply stating that ‘this report of a violation of national standards is unfounded'”, explains the Zero Waste Alliance’s general secretary Tian Qian. “In this case, we will take further action”. 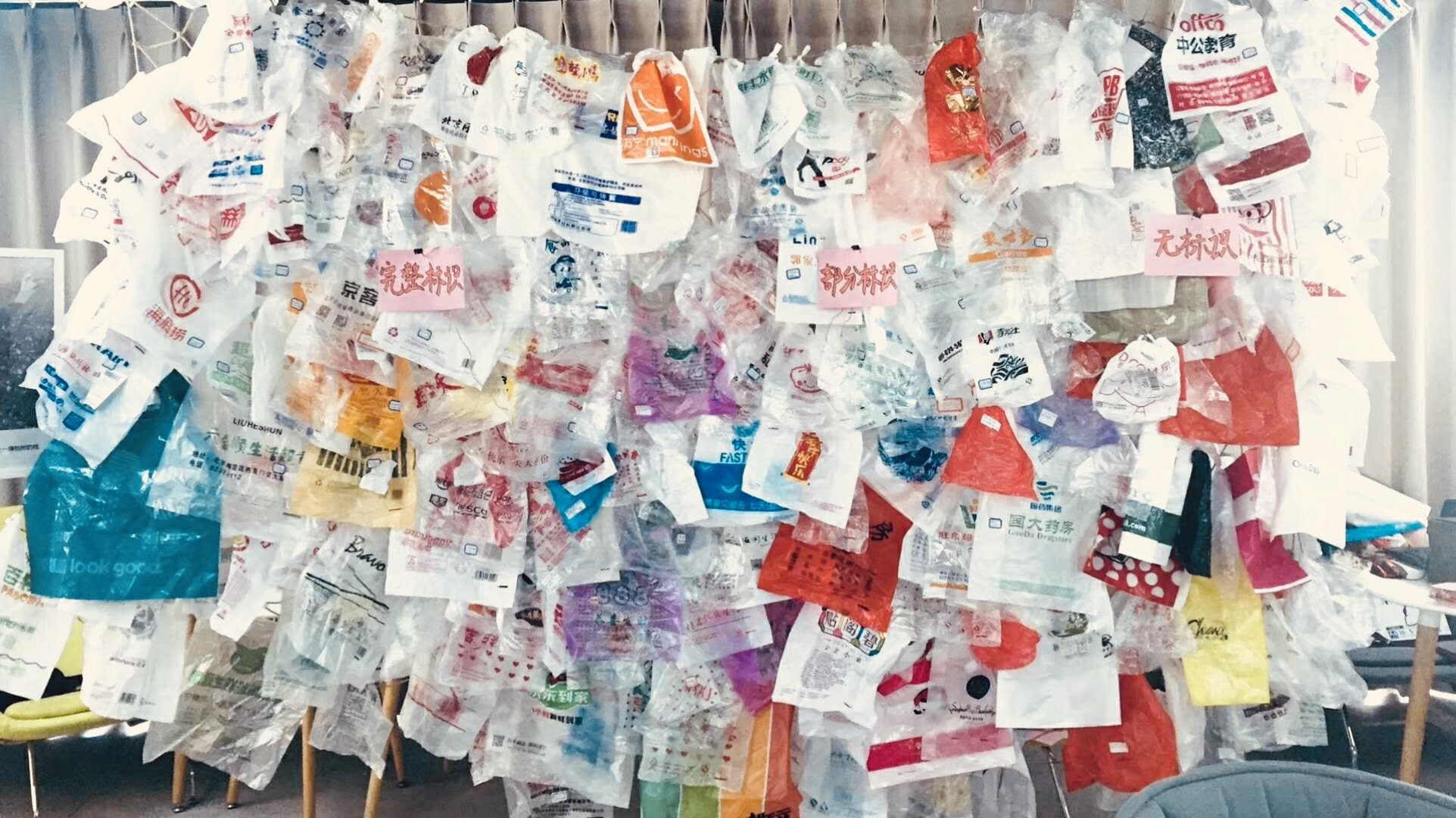 During the conference over 300 plastic bags collected during the research, including those with complete, incomplete or missing notices, were displayed.

At the end of the conference, the Zero Waste Alliance made the following recommendations for the future regarding the restrictions on plastic bags:

– Elevate the “restriction on plastic bags” to administrative law, amend penalties with corresponding punishments, increase fines, and require retailers to clearly state the reporting hotline for the violation of the plastic limits declaration to facilitate public supervision.

– Clarify the aims of the “restriction on plastic bags”, fully consider limitations on other plastic packaging, encourage the use of reusable carriers. The take-out industry should be brought under the scope of the limitations, take-out platforms should take responsibility for plastic bags used by the restaurants on their platforms to comply with regulations and the appropriate departments should increase their vigilance. 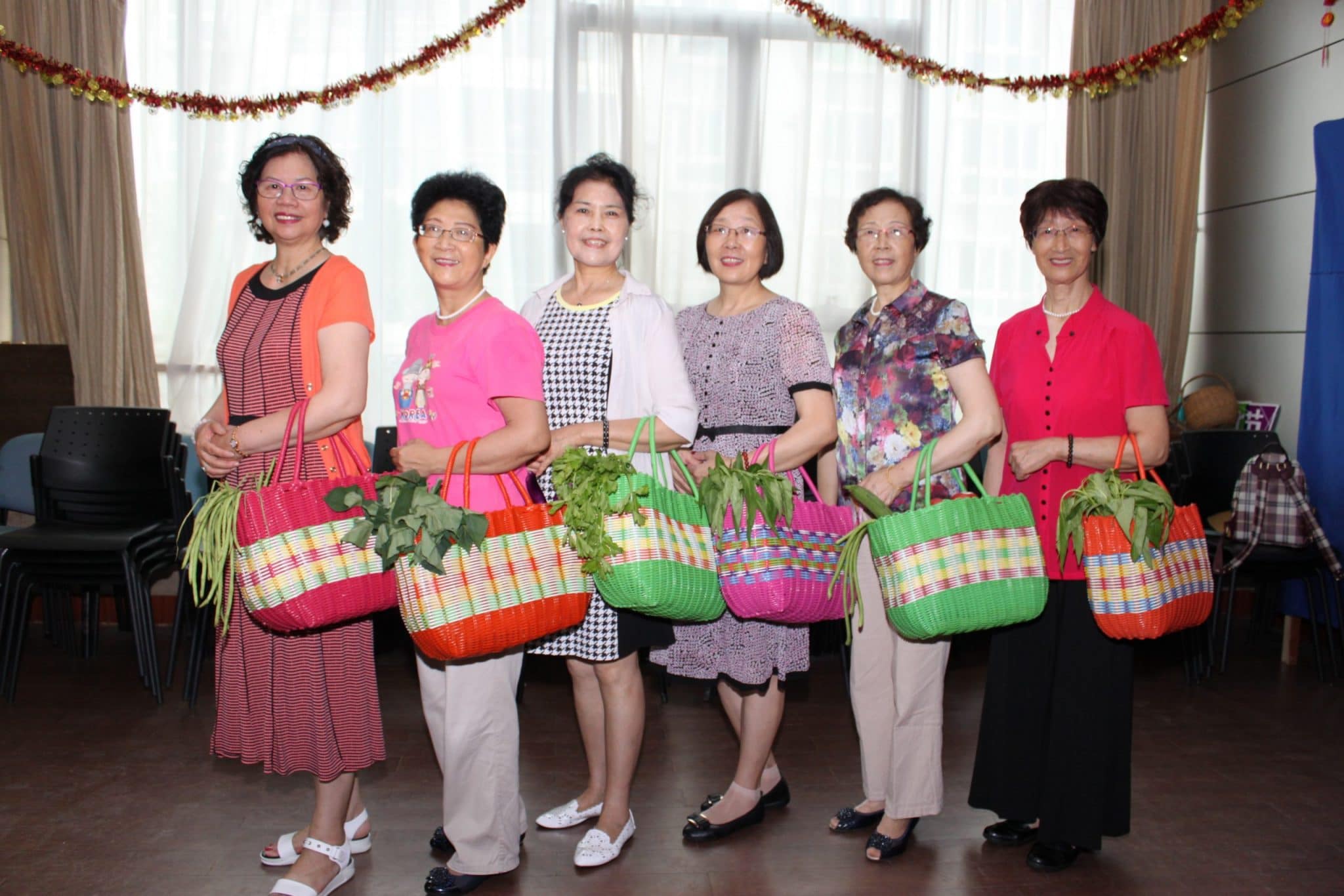 Photo courtesy of Aifen (爱芬环保). Residents at the Jinyang Community pose for the camera with their vegetable baskets.

Other than this, at the conference the Zero Waste Alliance and the Shanghai Ai Fen Environmental Protection jointly introduced the “Hello, food basket – 2018 one million plastic bag reduction” initiative, targeting the problem of use of plastic bags at vegetable markets and supermarkets, calling for 10.000 people or households to take on the challenge and reduce the use of plastic bags by a million, using fruit and vegetable baskets, cloth bags and other suitable alternatives to reduce dependency on plastic bags and develop better environmental habits. Through the promotion of large scale practices and extensive publicity and dissemination to promote larger social awareness and participation, this initiative will bring a more practical solution to China’s plastic waste issue. The initiative has also support from the One Foundation and the Yiqifen Community Plan.

This is how Xie Xinyuan, policy director of the Zero Waste Alliance, summarizes things: “This year happens to be the tenth anniversary of the national restrictions on plastic bags. Ten years ago the introduction of the restrictions carried some significance: on the one hand it educated the general public on the impact of the problem of plastic waste, and on the other hand it increased public awareness of environmental issues, elevating it to a national commitment. But our research has found that with the passage of time, apart from the dedicated commitment of large supermarkets and convenience store franchises to the restrictions, a large proportion of retailers have not been implementing the regulations.”

“When facing the next ten years, the plastic pollutant problem will be even more prominent and the challenge even bigger. Other than the suggestions made above, we hope that in the next ten years the restrictions don’t solely focus on plastic bags but turn into an even larger policy including disposable plastic packaging. At the same time, so-called “degradable plastics” should not be turned into a solution. The government and general public can also find ways, like the food basket initiative, to reuse carrier items in order to achieve the target of reducing plastic waste.”

You may also want to read:

A decade after the Chinese government took the step of banning free plastic shopping bags, a report by the Zero Waste Alliance looks at what has changed on the ground.