Special Report: The Roles and Challenges of International NGOs in China’s Development

This report was written by Dr. Shawn Shieh (谢世宏), Director and Editor of China Development Brief (English), and Signe Knutson (柯思林) who was a Visiting Research Fellow at CDB (English) during the Spring of 2011.  An earlier version of this report appeared in the 2012 Blue Book of Philanthropy (Social Sciences Academic Press (China), 2012). We would like to thank Sabine Mokry for her invaluable research assistance.

International NGOs such as the Ford Foundation, China Medical Board, and World Wildlife Fund, have been coming to China since the start of the reform and opening period in the1980s.  Yet only a few are legally registered, and the remainder carry out their work using creative arrangements with Chinese characteristics. This report argues that, despite working in a tenuous political and legal environment, international NGOs have managed to play a significant role in promoting development in China through partnerships with government, business and civil society actors.

The report provides a detailed discussion of the following areas: (1) the policy environment for international NGOs working in China and how it has changed over the past 30 years; (2) the roles international NGOs play in shaping policy preferences and promoting participatory approaches in China; and (3) the limits and challenges facing international NGOs and their future in a rapidly globalizing country that seeks a greater voice on international issues.

NGOs and INGOs are a subset of a very broad and diverse group of organizations that are part of what is called the third sector, the voluntary sector, the civil society sector, or the charitable or philanthropic sector.  This sector consists of informal and formal groups, organizations and networks that are share several common qualities.  They are largely voluntary, nonprofit, private (e.g. nongovernmental)  and self-governing ((Lester Salamon and S. Sokolowski, Global Civil Society: Dimensions of the Nonprofit Sector, vol.2 (Kumarian Press, 2004).)). They are also mission-driven although their missions vary widely from assisting their members (what are sometimes called mutual-aid or self-help organizations) to providing services to those in need to advocating on behalf of certain communities.  Together these qualities distinguish this sector from government (the first sector) and business (the second sector), although the distinctions are not absolute and there is overlap between these sectors.  For example, there is that species of NGO known as government-organized NGOs (GONGOs) that are either established by the government or have close connections with the government.  There are also NGOs that look like consulting companies or adopt business models to achieve a social mission.  Examples of the latter can be seen in the emergence of social enterprises, social investing and philanthropy venture groups.

In China, NGOs are commonly referred to as “civil organizations” (民间组织)，”social organizations” (社会组织) or “public welfare organizations” (公益组织)。NGOs registered with Civil Affairs departments (民政局) are generally referred to as “social organizations” and separated into three categories: “social groups” (社会团体) which are similar to membership associations，civil non-enterprise units（民办非企业）which are similar to service providers, and foundations (基金会).  In addition, there are also many NGOs that are registered as businesses or are unregistered.   These unregistered NGOs are often quite small and informal, and based in urban and rural communities.  Many scholars estimate there are more unregistered NGOs than registered NGOs in China ((See for example Wang Ming, “The Development and Present Situation of NGOs in China”, Social Sciences in China, vol. 28, no.2 (Summer 2008), 99-100; Yu Keping, “Civil Society in China: Concepts, Classification and Institutional Environment” in Deng Zhenglai, ed., State and Civil Society: the Chinese Perspective (World Scientific, 2011), 88-89.)).

We use NGO and INGO as a loose shorthand for all these third sector organizations, even though as Nick Young and others point out, the acronym NGO only became popularized in the post-World War II era when the UN, which is made up of governmental organizations (GOs), wanted to invite other organizations as observers to UN meetings and events and referred to them as NGOs to distinguish them from the GOs.  Over time, organizations such as foundations, relief organizations and networks and mutual-aid associations that had existed long before the UN began to call themselves NGOs.   During the 19th century, these private organizations and networks engaged in highly publicized campaigns to bring about the end of slavery in the U.S., to fight for women’s suffrage, and to end foot binding in China ((Margaret E. Keck and Kathryn Sikkink, Activists Beyond Borders: Advocacy Networks in International Politics (Ithaca: Cornell University Press, 1998), 39.)).  From 1874 to 1914, the number of registered international NGOs rose from 32 to 1083, among them the International Red Cross and the International Olympic Committee.  During the 20th century, and particularly after World War II, the number of INGOs grew rapidly and they came to play a significant role in international affairs.  Today there are over 13,000 INGOs, with roughly a quarter of these emerging after 1990.  In 1948, the UN Charter granted Consultative Status with the Economic and Social Council (ECOSOC) to qualified INGOs.  These INGOs play a significant role in shaping negotiations at major global conferences on issues ranging from climate change to international trade ((Helmut Anheier, Marlies Glasius and Mary Kaldar, “Introducing Global Civil Society,” in Global Civil Society (London: SAGE Publications, 2007), 4.)) .

The INGOs we are concerned with in this chapter are generally formal organizations with staff and offices that are registered in developed countries and have programs and/or offices in China as well as other countries.  They come from different traditions, hold different values, and realize their mission in different ways.  Some such as World Vision, Catholic Relief Services, Tzu Chi (the Taiwanese Buddhist organization), EED and Misereor were motivated by a religious impulse although many of these ultimately work to alleviate broader humanitarian and social problems.  Others such as the Red Cross, Oxfam, Save the Children, Mercy Corps, and Plan emerged from a response to humanitarian crises and problems arising out of war, natural and man-made disasters.  More recently, with rapid industrialization and the depletion of the earth’s natural resources, the list of humanitarian problems have been broadened to include environmental crises that have spawned environmental NGOs such as The Nature Conservancy, the World Wildlife Fund, Greenpeace, Natural Resources Defense Fund, Conservation International.    Finally, there is the philanthropic tradition that found powerful expression in the U.S. where wealthy industrialists such as Rockefeller, Carnegie and Ford established foundations for charitable purposes.

These traditions should not be thought of as mutually exclusive.  There is now a great deal of overlap between these three traditions.  Organizations from all three traditions address humanitarian and social problems, seeking to find ways to alleviate the social and environmental problems created by modernization, industrialization and globalization.

The INGOs covered in this chapter include all of these traditions.  To keep the chapter manageable, we focus on INGOs involved in the development field because these are the organizations that are more likely to have an interest in carrying out programs and projects in China.  This focus includes faith-based, humanitarian relief and development, specialist nonprofit consulting and implementing, and campaigning/advocacy organizations but leaves out a large part of the NGO community (see Table 1).  Those not covered here include self-help or mutual-aid groups such as professional or trade associations or chambers of commerce that exist to share skills, techniques, information and set standards in their profession or trade.  We also do not look at campaigning INGOs whose work touches on China but do not have China-specific programs, nor do we devote much attention to a category of “NGOs” associated with universities and think-tanks such as the Carnegie Foundation for International Peace and the Brookings Institution which have only begun to enter China very recently. 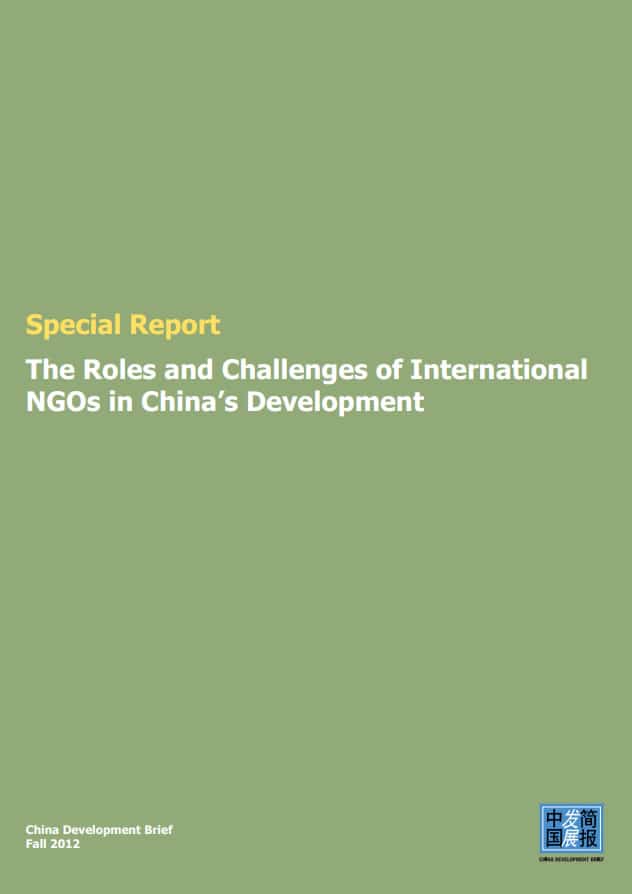