This Special Report was written to accompany the Chinese NGO Directory: A Civil Society in the Making  (A China Development Brief publication, 2013), and provides an analysis of the data gathered for the Directory. It was co-authored by Shawn Shieh, Editor of CDB (English) and Amanda Brown-Inz, CDB (English)’s Associate Director, with Fiorinda Di Fabio providing invaluable research assistance.

Click here to order a copy of the Chinese NGO Directory

In spite of imposing political, economic and social barriers, grassroots, public interest NGOs have come a long way in China. The term “grassroots” is used here to refer to private, independent organizations started by individual citizens with few or no ties to the government. The term “public interest” refers to NGOs working on social and environmental issues that extend beyond the narrow interests of the organization or its members. During the early 1980s, in the early days of “reform and opening”, there was no independent NGO sector to speak of. Even by the early 1990s, there were only a handful of truly independent NGOs working on public interest issues. The sector was small enough that everyone working in it knew everyone else. It was truly a “small circle” of like-minded colleagues. But it was also a vulnerable group that subsisted on the margins of society. Much has changed over the last decade. These NGOs have grown rapidly, and become increasingly diverse in terms of their missions, their organizational form, their development strategies, their partners and their funders. They are no longer only a “small circle” and are slowly joining the mainstream of society. But one thing has not changed: these NGOs are still not clearly visible to, or well understood by, the Chinese and international communities. This Directory and Special Report was produced in an effort to bring some of the more established and recognized NGOs into the public spotlight.

The purpose of this Special Report is to provide an overview and analysis of the grassroots, public interest NGOs covered in this Directory, and recommendations on how to support these NGOs.  The Introduction discusses the Directory’s making in the context of previous NGO Directories published in China, and our reasons for creating this Directory, which is to highlight and focus attention on this group of NGOs.

The Scope and Methodology section defines the scope of the NGOs we include in the Directory and lays out our reasons for focusing on what is actually a very small subset of China’s NGO community. Those reasons include wanting to highlight and advocate for a group of NGOs that are dedicated to addressing many of China’s social and environmental problems, yet remains marginalized, vulnerable and poorly understood by both Chinese and foreigners. It also discusses the methodology we used to select the NGOs included in this Directory. To be included in the Directory, NGOs had to meet several criteria. They had to be established for at least two years, active in running programs or projects, and relatively influential. To identify these NGOs, we looked to NGOs that had been reported on by CDB in the past, as well as NGOs recommended by nine reputable partners that serve as regional platforms for NGOs in their area.

The third section – the Landscape of Chinese NGOs – maps the NGO landscape by drawing on data provided by the NGOs in this Directory.  It looks at the geographic and sectoral distribution of these NGOs, their years in existence, registration status, and their budget and staff size. This analysis shows that NGOs tend to be concentrated in certain regions, mostly in major cities and along the coast, and focused more on social service sectors such as education, child welfare, disabilities and elder care. The exception to this emphasis on services was the environmental sector, which is known for its advocacy work, and was the largest sector among this group of NGOs. The data also show China’s grassroots, public interest NGOs to be quite young, with 82 percent of those in the Directory established after 2000. In addition, they tend to be small and lacking in legal status and financial and human resources. About 56 percent of the NGOs in the Directory had a staff under 10 people, and 72 percent had budgets under RMB 3 million (about US$476,000). In addition, a large number – about 39 percent – were not registered as NGOs, but as businesses or were unregistered.

Finally, this section also examines those who fund these NGOs. It looks at the distribution of funding coming from international organizations, Chinese foundations, the government, Chinese GONGOs and businesses. While the data we have on funding is fairly general, it suggests that funding patterns for NGOs have diversified. Whereas in the past, many NGOs relied heavily on international donors, now NGOs appear to draw from a wider range of Chinese donors. This finding is yet another indication of the gradual mainstreaming of China’s NGOs.

Patience, persistence, and understanding are critical.

Many Chinese NGOs lack the staffing and capacity to deal promptly with requests from non-Chinese speakers. Aside from the profiles in this Directory, some NGOs have a fair amount of information on the internet about them. These are the NGOs that generally have someone on their staff who speaks English, and should be the first point of contact for those with no Chinese language skills.

Approach the NGO with respect and humility, as an equal partner.

Working with a Chinese NGO requires being flexible and adapting to sudden personnel or regulatory changes. Chinese NGOs understand the need to have their programs monitored and evaluated but they also appreciate being given the responsibility and autonomy to implement their programs without undue interference and excessive reporting requirements.

Consider changing or being more flexible with your funding, and monitoring and evaluation, guidelines when working with Chinese NGOs.

As our report shows, many NGOs are still quite small in scale and lack the staff and expertise needed to implement large-scale projects. Consider offering smaller grants, around $20,000-$50,000, which can go a long way in China.

Capacity building has always been and continues to be a high priority for many Chinese NGOs.

Aside from funding, consider providing other forms of pro-bono support such as mentoring, advice and coaching, particularly to new grantees who would benefit from getting help mastering international reporting and financial management standards.

Consider partnering with another organization such as a Chinese or international foundation, GONGO or business that already works with local grassroots NGOs.

At the end of this Directory, we have compiled a list of Supporting Organizations that have a record of supporting and working with grassroots NGOs.

The purpose of this report is to provide an overview and analysis of the grassroots, public interest NGOs covered in this Directory, and recommendations on how to support these NGOs. 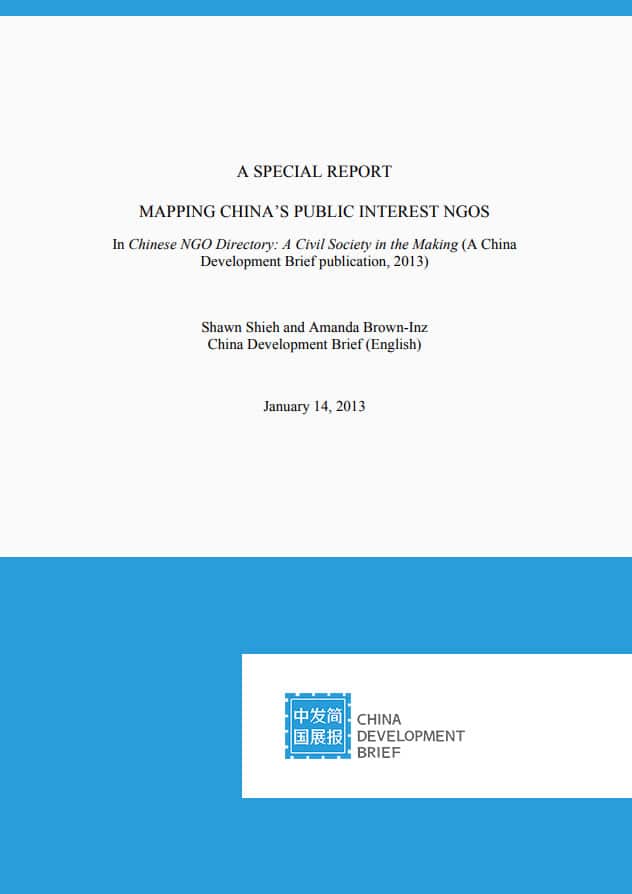