The China Biodiversity Conservation and Green Development Foundation (CBCGDF), one of China’s most important environmental organizations, has recently kicked up a storm by announcing the “functional extinction” of the Chinese pangolin. At the recent forum of the C-SDG Global Sustainable Development Youth Leadership Program, held in Beijing on June 8, a young woman from the CBCGDF who works in pangolin conservation made the eye-catching claim.

The main reason for the Chinese pangolin’s extinction in mainland China is people killing it for its scales, considered to be valuable ingredients in Chinese medicine. According to the CBCGDF’s calculation, about 170,000 to 180,000 pangolins were caught annually around the 1960s. In the 1980s the number of pangolins started to decline, dropping by at least 80% in ten years. By the end of the 1990s they were hard to find in most areas of China.

The young environmentalist also indicated that pangolins reproduce very slowly. In general, females only produce one litter a year with one cub. Once their population declines, recovery through natural reproduction will be very difficult. They are also vulnerable to human disturbance, which could easily lead to their complete extinction. What’s even more worrying is that current human research on Chinese pangolins is limited, with no effective artificial breeding achieved. Therefore it will be extremely difficult and challenging to alter their functional extinction.

The CBCGDF’s announcement of the Chinese pangolin’s functional extinction soon provoked a furious debate on social media. Many netizens questioned the scientific basis of this conclusion, and some of them even directly denounced the CBCGDF, a civil society organization, as unqualified to announce the extinction of a species. The debate also drew many experts’ attention. In a report by the Guangming Daily, released on June 17, an expert from the Endangered Species’ Scientific Commission of the PRC argued that although wild Chinese pangolins are infrequent, they are still far from functionally extinct. We can still see great opportunities in their repopulation, said the expert, and we should never give up on our hope and efforts.

As the controversy grew, some netizens on Weibo started to look for further reasons behind the CBCGDF’s announcement, and suggested that the organization’s real aim was to promote their own program to introduce the Malayan pangolin, another species found in South-East Asia, into China. This program’s feasibility was also widely discussed on social media. Many people wondered whether the Malayan pangolin could become an external invasive species, further threatening the existence of the Chinese pangolin, and whether it could adapt to the different living conditions of China. 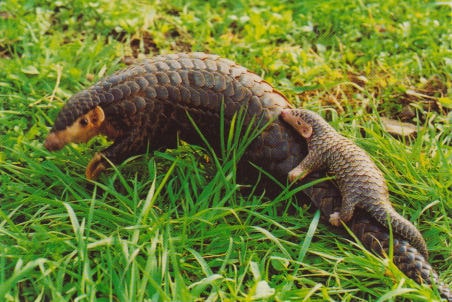 A mother pangolin carrying its baby on its back

In the face of all these criticisms, the CBCGDF soon responded with five articles on different aspects of the Malayan pangolins’ current situation in China. In the most recent article released on June 16, they explained why the Malayan pangolin should not be classified as an external species. It is illustrated that the CBCGDF’s volunteers, with the support of the Kunming Institute of Zoology of the Chinese Academy of Sciences, found evidence to prove that the Malayan pangolin already lives in South-Western China. Several authoritative documentary evidences corroborating their existence in Yunnan province from 2005 to 2015 were also found.

In the other four articles, the CBCGDF also defended its program by answering the questions raised by skeptics. They claimed that as living Malayan pangolins can be still found in wild areas, their capability to live healthily in China should not be doubted. As the wild population of pangolins is too scarce, the introduction of Malayan pangolins won’t threaten the local species in the short term. Moreover, mass deaths of pangolins have frequently happened in recent years due to local governments’ rejection of their introduction. The government detained groups of Malayan pangolins that had been imported (possibly illegally) and postponed sending them back, finally leading to their deaths. Without the ability to look after them in a safe way, releasing them into the wild would have been a better choice.