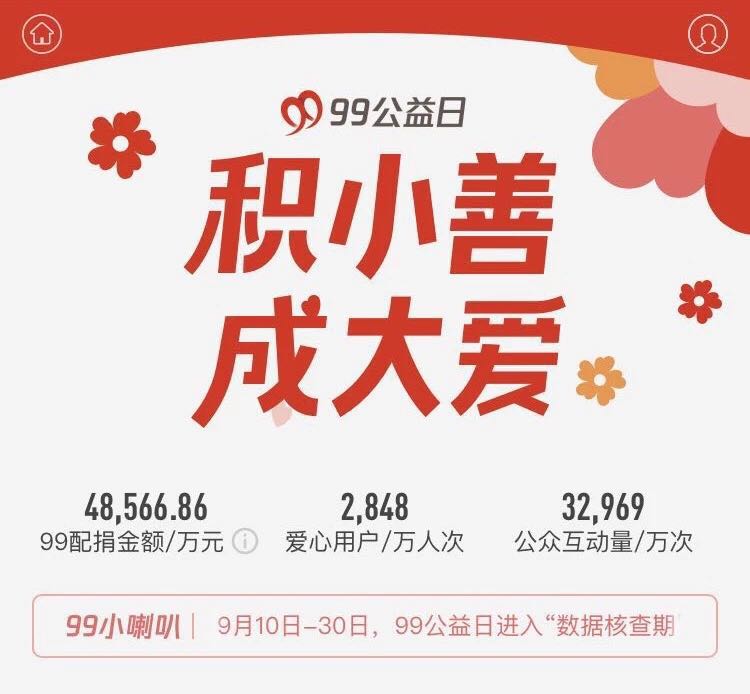 The fourth edition of Tencent’s annual 9/9 Philanthropy Day formally ended at midnight on September 9th. According to data from Tencent, during the event’s three-day run more than 28 million individual donations from the public raised 830 million yuan through Tencent’s public platform, and more than 2000 enterprises donated 185 million yuan to support 5498 philanthropic projects. The Tencent Charity Foundation provided 299.99 million yuan in matching funds, and 100 million to a growth fund for philanthropic organizations. Total donations were thus around 1.414 billion yuan.

According to Tencent, educational projects were most successful, receiving 35.2% of all the funds raised. Healthcare projects received 34.5%, “anti-poverty/comprehensive” projects received 26.1%, and environmental and animal protection projects received 4.2%. Furthermore, there were more than 28 million individual donations this year, which is double the number for last year. However, the total amount of money donated was very similar to last year, meaning that the average size of the donations shrunk considerably. This is perhaps in line with the original slogan of the 9/9 Philanthropy Day: “a little kindness makes a great love” (积小善, 成大爱).

The China Charities Aid Foundation for Children fundraised the most out of all the nonprofit organizations taking part, receiving 116,998,248.83 yuan (not counting matching funds from enterprises) from 3,610,666 donations. As already mentioned, more than 2000 enterprises were also involved in the event. Among them Cadillac came in first place, with donation amounting to 3,950,455.7 yuan received from 39708 individual donations. 15 enterprises received more than 10 thousand donations each.

Over the first three editions of Tencent’s charity event, from 2015 to 2017, there was a very large increase in the total amounts fundraised. The debut in 2015 raised 127.9 million Yuan, the 2016 edition raised 300 million, and the third edition last year raised 1.3 billion, including 829.9 million from the public. This year donations have continued to grow, but the growth has been much more contained, with total donations of 1.4 billion, as compared to 1.3 billion last year. Donations from the public have remained practically the same as last year, while total donations have increased mainly because of the participation of the enterprises. This suggests that donations from the general public have probably hit a peak, while hopes for further growth might rest with the private sector’s increased involvement.