A report on the Policy Environment for Chinese NGOs

This is an abridged translation of an article published by NGOCN (www.ngocn.net) on July 2, 2018. The full article in Chinese can be found here.

It could be said that over the last two years the Chinese charity sector has seen a switch from the old system to a new one. On the one hand, there has been the introduction of important laws such as the “Charity Law”, but on the other hand the updating of supporting regulations such as the “Three Major Regulations” is still being awaited. Figures contained in “The Blue Book of Philanthropy: A report on Chinese Philanthropy (2018)”, recently published by the Social Policy Research Centre of the Chinese Academy of Social Sciences, demonstrate that compared to the years of 2015 and 2016, the growth in the number of foundations, social groups and private non-enterprise units slowed down in 2017.

The questions of how to promote the improvement of the charity sector and how to give civil society organisations practical legal guarantees and support are lifelong topics of research for the team at NGOCN.

Today, we publish the findings of our newest report, “an investigation into the amicability of the policy environment for civil society and philanthropic organizations”. The investigation includes 10 cities across the country, and it is based upon 680 valid questionnaire responses and 80 in depth interviews. It attempts to illustrate the degree of amicability of the philanthropic policy environment and the changes within it.

This research systematically collects opinions from the philanthropic and academic sectors, along with financial and legal professionals, to create a series of policy evaluation standards from a civil society perspective. It reflects the opinions of civil society organisations towards the amicability of the current policy environment.

This series of standards would serve two main aims: 1) to survey the amicability of the Chinese policy environment for civil society and the changes within it from the perspective of charitable organisations, in order to make suggestions for policy improvements; 2) to reflect the voices of charitable organisations, in order to encourage attention from various social sectors towards the development of the philanthropic sector and thus improve the policy environment.

What follows are some of the major findings of the report.

The registration of charitable organisations has long been a topic of great importance for the sector. It is required that these organisations register with the departments of civil affairs and in addition to that also find a PSU, and this “double supervision” requirement has attracted much criticism. In 2013, in order to promote the vitality of social organisations, it was tried to allow four types of social organisations (chambers of commerce, organizations focused on science and technology, charities and urban and rural community services) to apply to the civil affairs department without prior PSU approval (known as direct registration). 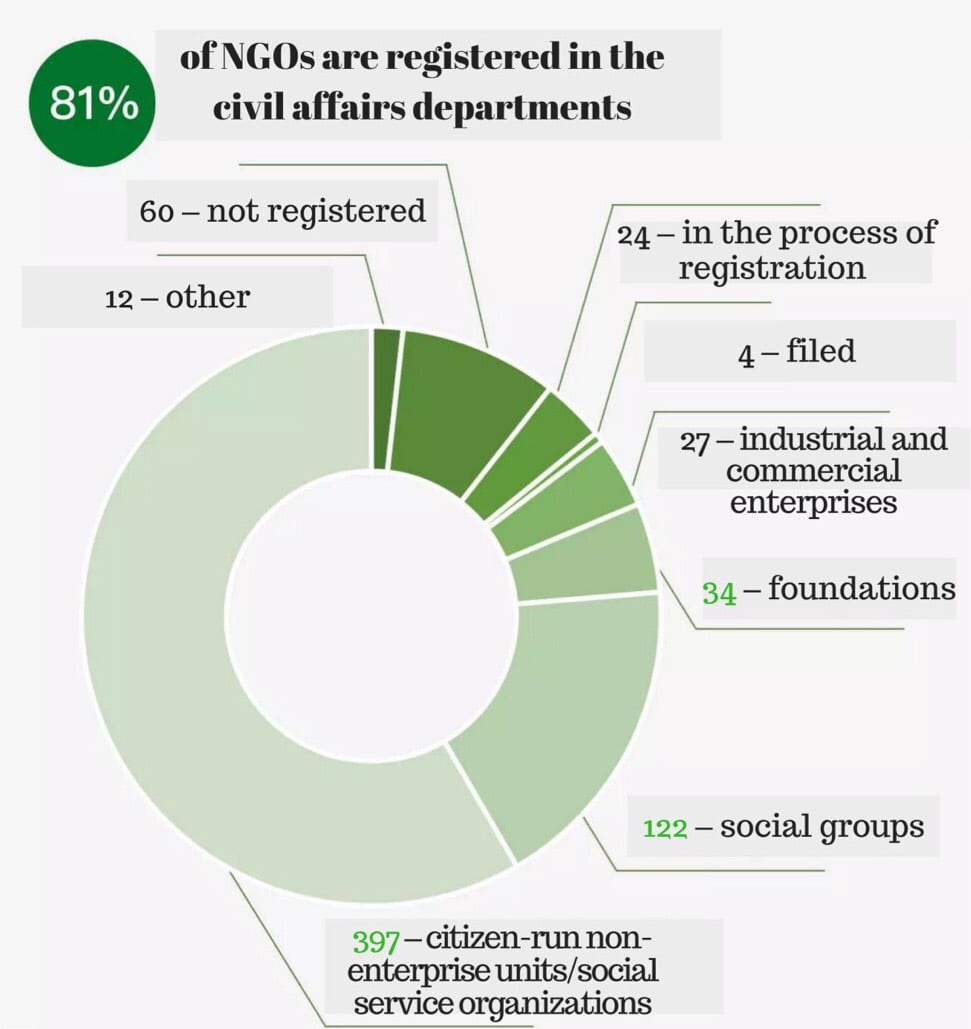 It seems that the requirements for registration are too high, too complicated and too strict, all of which may affect organizations’ willingness to register. The requirement to find a PSU is the most frequently reported issue. A point of note is that in cities including Beijing, Guangzhou, Nanchang, Shanghai, Chengdu and Kunming, cases have appeared of organisations that had registered directly again being required to find a PSU, or face having their registration revoked. 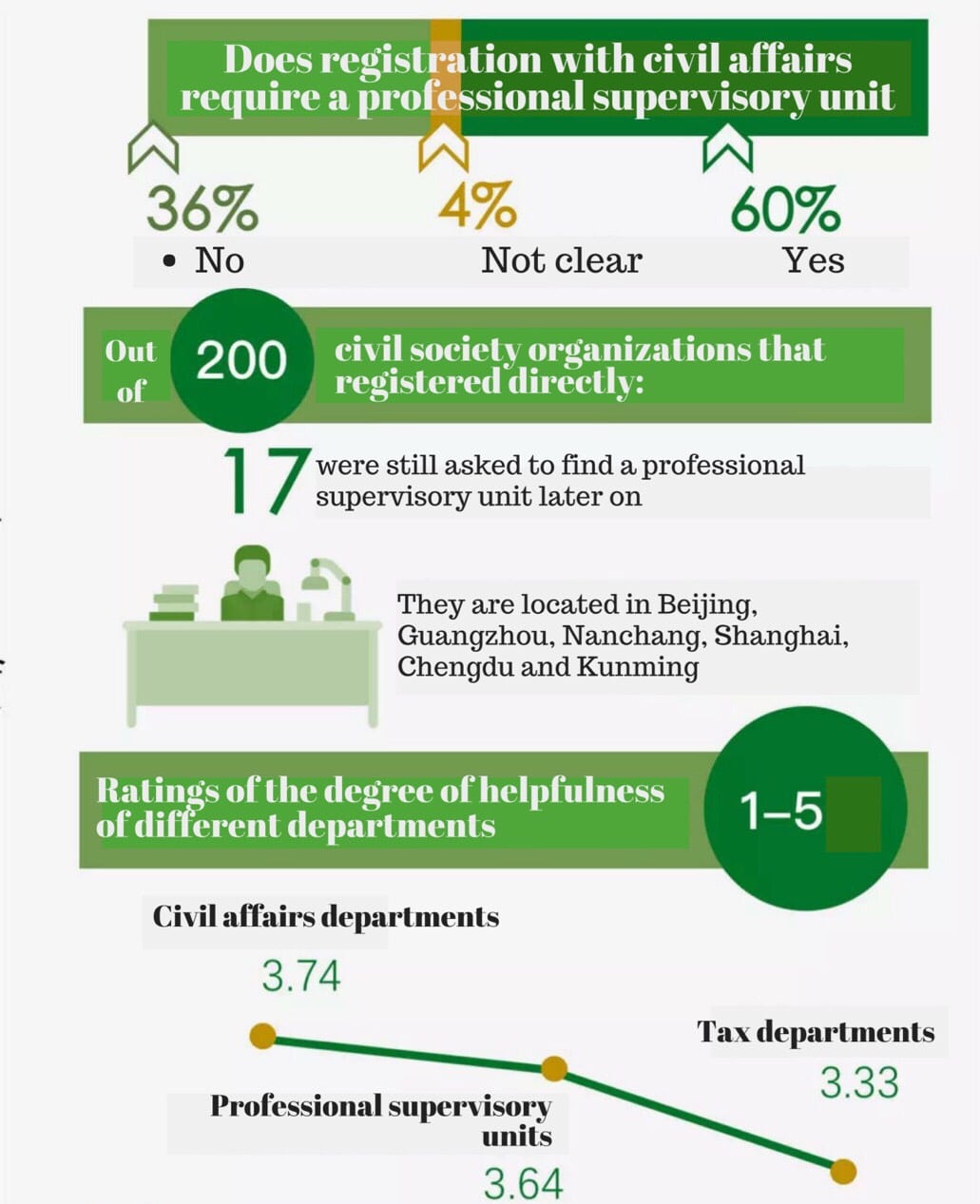 The suggestion put forth by the researchers is that the requirements for the registration process be relaxed, and that as long as organisations are carrying out charitable activities they should be included in the scope for direct registration.

Public fundraising has become the main source of income expansion for many civil society organisations.

In this research, over 30% of organisations indicated that they have had previous support from domestic enterprises, and nearly 25% had income of their own. This shows that the interaction between the private sector and the philanthropic sector is growing. 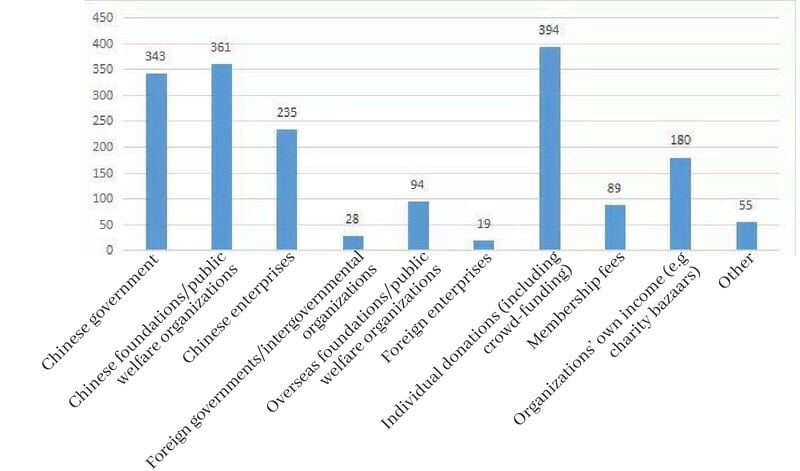 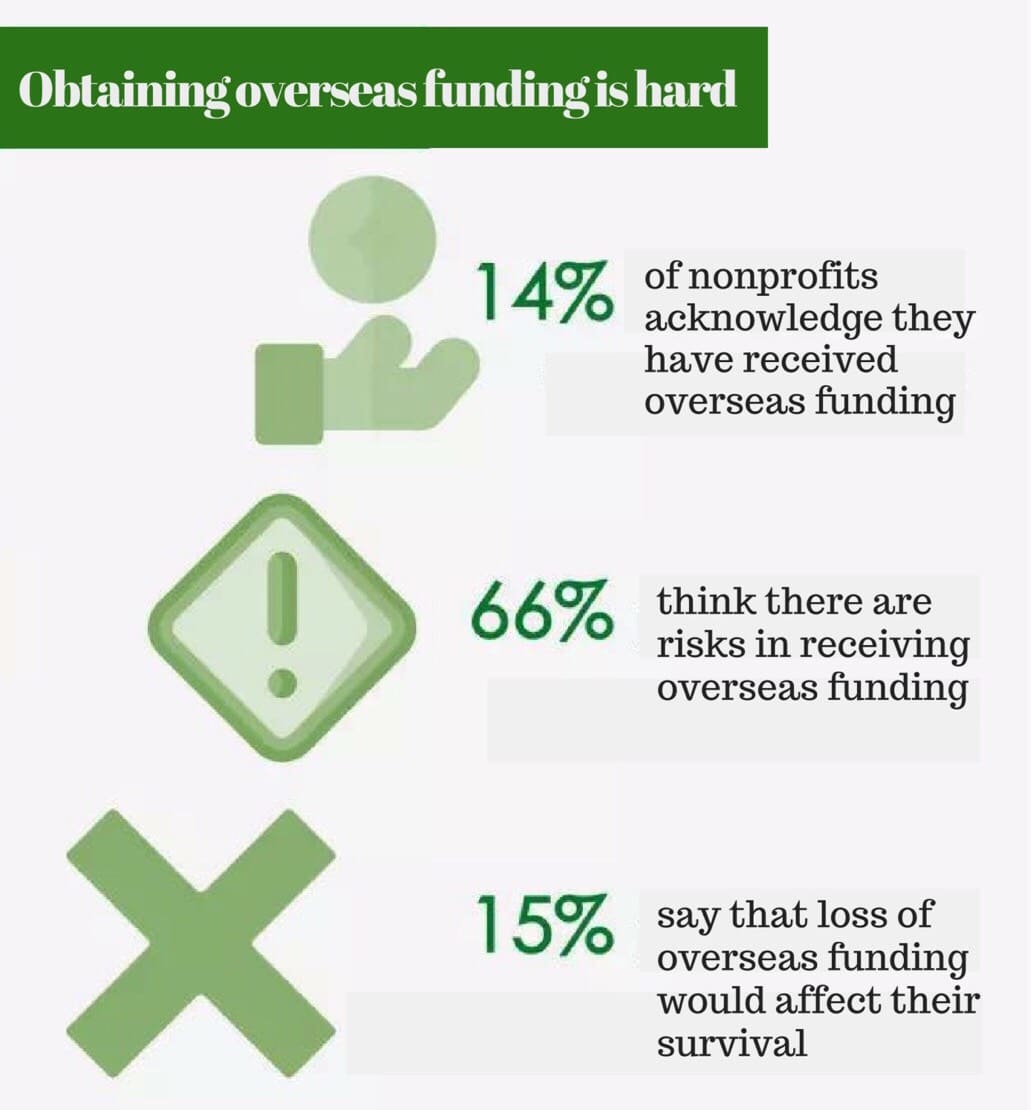 321 (47%) organisations have had their services bought by the government, and over 30% have taken part in government-organised competitions to gain funds. 28% of respondents have gained government project funding and 23% have gained funding through partnerships. 54 organisations chose to have government funding as their sole source of income. The research found that government funding is specified for certain projects, such as supporting the elderly, community development, disability-related and social innovation projects; the requirements for this type of funding are also relatively high.

In regards to registration:

1. In accordance with the spirit of the Charity Law to encourage civil society’s development, there needs to be a larger scope for registration and relaxed regulations, especially for those civil society organisations whose activities count as charitable.

2. Local governments should be encouraged to have positive and innovative policies for supporting social organisations, such as special funds and rewards for those organisations that have made great contributions.

3. Local civil affairs departments should expand their definition of “civil society and philanthropy” for the purposes of registration, promoting the development of a diverse range of issues and reducing the invisibility threshold.

In regards to funding:

1. When services are bought by the government there should be less administrative process and more focus on outcomes.

2. The services bought by the government should be expanded to support a more diverse range of issues and civil society organisations, for example migrant populations, environmental protection and gender issues.

In regards to government support and oversight:

3. Develop the routes for civil society organisations to interact with enterprises, increasing their mutual cooperation.

In regards to taxation benefits:

2. Expand the conditions for receiving taxation benefits and strengthen incentive outcomes, including expanding the scope of tax exemptions for philanthropic and charitable organisations. 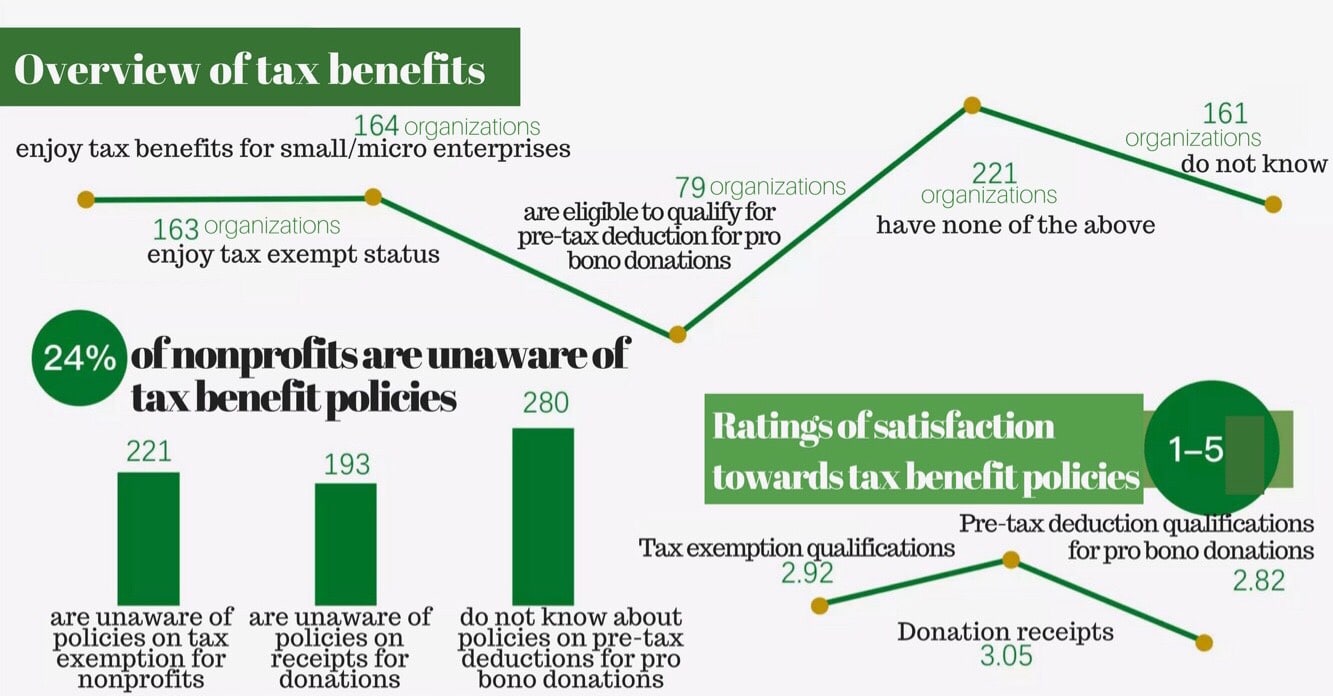 A report by NGOCN looks at the friendliness of the policy environment for local NGOs in China. Replete with interesting statistics and policy recommendations.