On April 13, Japan announced its decision to release treated wastewater from the destroyed Fukushima Daiichi nuclear plant into the ocean, following the tsunami which caused the meltdown of three nuclear reactors in March 2011. Since then, over 1.25 million tons of cooling water have been used to keep the reactor cores from melting. While the world is focused on the environmental impact of Japan’s decision, it is important to remember just how much people rely on access to clean water every day.

The sixth United Nations Sustainable Development Goal sets out to ensure the availability and sustainable management of water and sanitation for all. Water scarcity affects more than 40 percent of the global population,[1] a problem that is being exacerbated by rising global temperatures and polluted water from human activity. Contaminated water can transmit diseases such as diarrhea, cholera, and dysentery, causing approximately 485,000 diarrheal deaths per year.[2] It is estimated that by 2025, half of the world’s population will be living in water-stressed areas.[3] 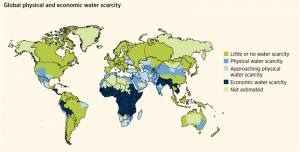 Water scarcity also has a negative impact on food production. Without water, farmers cannot grow their crops or feed their livestock, contributing to food insecurity. The lack of adequate food and water hinders social and economic progress, especially in less-developed countries. Therefore, universal access to safe and affordable drinking water by 2030 is an essential goal that every country must strive to achieve. Doing so requires substantial investments in renewing outdated infrastructure, building sanitation facilities, and increasing public awareness of water scarcity. China is committed to the United Nations 2030 Agenda for Sustainable Development, and both its government and civil society efforts have been directed to that end.

With nearly one-fifth of the world’s population and only about 6 percent of global renewable freshwater resources,[4] water scarcity has been a long-term challenge for the country. Access to safe drinking water in China has greatly improved over the past few decades. The country’s development drive and rural-to-urban migration have improved living standards and expanded water access, yet millions still live without easy access to safe and clean water.

China’s water resources are not only scarce, but also hugely impacted by pollution. High economic growth followed by rapid industrialization and urbanization have increased both demand for clean water and water pollution. Between 2000 and 2015, China’s total water use increased by 8.8 percent and wastewater emissions grew by more than 50 percent.[5] Moreover, around 8.3 percent of China’s water is too polluted for use in the agricultural and industrial sectors.[6] Water shortages and pollution have affected major cities nationwide. For example, the 112 million residents of Beijing, Tianjin, and the surrounding province of Hebei manage their daily lives with less than the per capita annual water consumption of Saudi Arabia.[7] 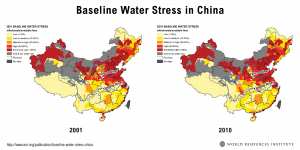 In response to the shortage of clean water, in 2015, China’s State Council issued the Water Pollution Prevention and Control Action Plan to improve water quality and manage water resources. In 2017, the National People’s Congress revised the related Water Pollution Prevention and Control Law. The revised law requires the provision of emergency and back-up water resources in cities that rely on a single source of water, more transparent information on drinking water quality, construction of sewage treatment and garbage disposal facilities in rural areas, and a “river chief” system with leading officials taking responsibility for tackling water pollution.[8] Drinking water suppliers can now be fined when they fail to meet the required standards, and government officials are rewarded or sanctioned according to their performance.

Another obstacle to providing China’s 1.4 billion people with access to clean and safe water is the uneven distribution of freshwater resources. Roughly half of the country’s population is concentrated in its 15 northern provinces and municipalities, where only one-fifth of freshwater resources are located.[9] Policy responses in China have focused on diverting freshwater from the south to the north under the South-to-North Water Diversion Project, an effort that has been ongoing since construction began in 2002. Policymakers have also set ambitious water management standards and enhanced water conservation efforts to control water usage. The “Three Red Lines” issued by the State Council in 2021 set out country-wide water management objectives including limiting national water consumption to 700 billion cubic meters per year, increasing industrial water usage efficiency, and ensuring that more major water sources meet national water quality standards by 2030.[10] In 2015, China launched the “sponge city” initiative that ordered 30 cities to collect and re-use a required amount of rainfall by 2030.[11] Stringent measures to tackle water pollution and water scarcity in China have impacted hundreds of millions of lives, bringing the country closer to its sustainable development targets for 2030. 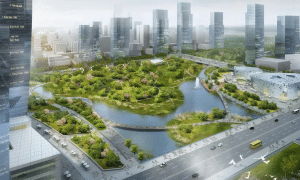 Alongside the Chinese government, non-governmental organizations (NGOs) in the country have contributed to the fight against water scarcity and unhygienic practices with their own projects. A lack of knowledge about water conservation and sanitation leads to unsustainable practices that not only waste water, but also endanger public health. This is an especially severe problem for children living in rural areas who are less aware of the environmental issue. In a bid to tackle this, domestic NGOs in China have launched campaigns to raise public awareness of the importance of water and hygiene.

One such organization, the China Environmental Protection Foundation (CEPF), has partnered with various companies on a series of projects related to safe drinking water. For example, its “Green Mountains and Clear Waters” project with Ping An Insurance has installed water purification systems in 10 primary schools and provided more than 2,500 students and teachers with filtered drinking water.[12] Other initiatives include the “Streams Action – Honeywell Safe Drinking Classroom” project, which has set up special safe drinking classrooms to supply hot and cold drinking water to schoolchildren in rural China, while also carrying out related education activities.[13] Similarly, the TOTO Water Environment Fund aims to disseminate knowledge and cultivate social awareness of environmental protection and water conservation through public campaigns.[14] In 2021, the CEPF plans to host water education and training programs centered on the theme of protecting the Yangtze River. These programs aim to train environmental activists in environmental protection clubs in universities, as well as workers in social organizations. The project, funded by TOTO, will reach 19 provinces and cities in the Yangtze River Basin. 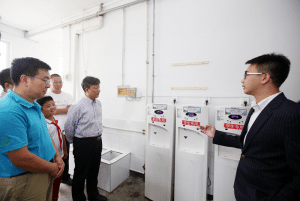 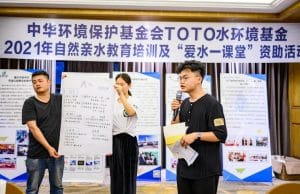 People tend to take access to clean water and sanitation for granted, but it is a privilege that many people in the world do not have. Events like Japan’s decision to release radioactive wastewater into the ocean remind us of our privilege and reliance on clean water in our everyday lives. The Chinese government has concentrated policy efforts on the battle against water scarcity and water pollution, with notable achievements over the past few decades. Chinese NGOs, such as the CEPF, have designed their projects to complement the government’s national agenda. Going forward, domestic NGOs can benefit from integrating their projects with government initiatives for wider impact, increasing their presence on social media and online platforms to reach a broader audience, and conducting public campaigns on water conservation and hygiene in urban areas to replicate the success they have had in rural areas. As citizens, we must also do our part to reduce water usage and limit pollution, while China gradually moves toward the development goal of ensuring the availability and sustainable management of water and sanitation for all. From turning off the tap when we brush our teeth to the proper disposal of wastewater, every drop matters.